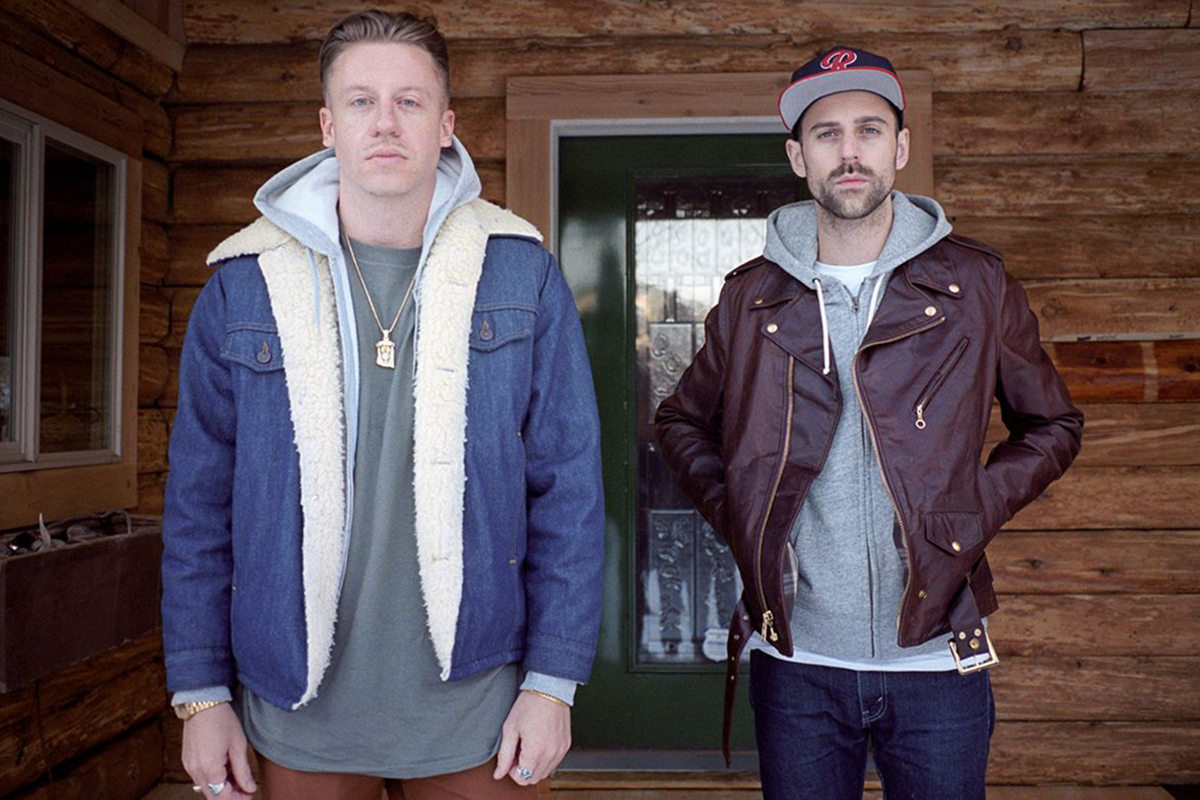 Hey y’all, here to give a review for the new Macklemore & Ryan Lewis album This Unruly Mess I’ve Made.

My first introduction to Macklemore was in high school, through my Psychology teacher if I remember correctly. This was before it was “cool” to hate Macklemore and shit on the success he hadn’t fully garnered yet.

Macklemore has been in game longer than some might think, he has solo bodies of work dating back to 2000. But these days he’s coupled with his very talented producer friend Ryan Lewis. Together they crafted the album that would controversially win a Grammy over Kendrick Lamar’s universally acclaimed good kid, m.A.A.d city. An award that even Macklemore himself felt that he did not deserve, being that he sent an apology text to Kendrick and posted it online.

Through this action and many other things brought up about about Macklemore’s character, people feel that he’s disingenuous or a kiss-ass to black culture.

“I wish my dad fucked a black woman” – Macklemore

Harsh, but it sums up what people feel about Macklemore on that particular side.

On the other side, people find his lyrics to be a bit corny and cringeworthy at times. I’m one of those people. BUT, I did enjoy The Heist. It wasn’t a bad album. It was fun, but introspective when it needed to be and Ryan Lewis’ production was on point. But was it Grammy worthy? I don’t believe so. Definitely not over good kid, m.A.A.d City. But no matter the system and assortments of fuckery going on within that network, he did win. So does this album live up to the victory? Let’s see.

1. Light Tunnels
Featuring Mike Slap; Produced by Ryan Lewis
The production here is grand. It’s a grand start. Macklemore does a damn good job at giving imagery here. He’s talking about preparing for the Grammys, all the way up to his win and his feelings afterwards.

Good job on not bringing up the Kendrick Lamar text message situation. I don’t think Cornrow Kenny would like to be involved in your unruly mess.

2. Downtown
Featuring Eric Nally, Mellel Mel, Kool Moe Dee, & Grandmaster Caz; Produced by Ryan Lewis
This is the “Thrift Shop” of track of this album. The subject on this track is about mopeds so there’s nothing really too deep here. It’s a silly track, but I feel like this is the type of corniness from Macklemore that’s silly enough to enjoy. It’s not taking itself seriously in any way.

Eric Nally on this track is tight as fuck. Rap legends Melle Mel, Kool Moe Dee, and Grandmaster Caz pop in here and there to lend some vocals. Their presence isn’t too big, but it does add to the track in a positive way. I might go watch Ferris Bueler’s Day Off now.

3. Brad Pitt’s Cousin
Featuring XP; Produced by Ryan Lewis
No. No. No. No. This is the type of silliness from Macklemore that I can’t tolerate.

Here he raps about being Brad Pitt’s ugly cousin and how he chills with his parents in Paris instead of his homies, and that his dick is named Ron Burgundy, and that his cat has an Instagram. He even adds the cat “meow” in there too. Doesn’t move me like Meow The Jewels does.

Shoutout to the homie D
whose D?
DEEZ NUTS

At least we now know who Macklemore is siding with during this presidential run. That hook is so cringeworthy too.

All my Angelina’s, if you got it let me see it

Nah, I’m not feeling this at all.

4. Buckshot
Featuring KRS-One & DJ Premier; Produced by Ryan Lewis
Okay, this is definitely an upgrade from what I had to endure on the last track. A little weird seeing the words “Macklemore featuring KRS-One & DJ Premiere”, but the outcome of actually pretty dope. Macklemore raps about how he would sneak out and tag walls with his friends as an expression of art and it’s solid. I love the Illmatic-esque piano keys on this track thanks to Preemo and, like I said, Macklemore is dope on this track, but KNOWLEDGE REIGN SUPREME, THE FIRST? No challenge.

Dope track. I can’t say that I have any complaints.

5. Growing Up
Featuring Ed Sheeran; Produced by Ryan Lewis
Sweet track as far as subject matter goes. It’s cute. Personally, I never really cared for Ed Sheeran’s music as much as others who praise him, but his feature here is solid.

Those horns that come in near the end of this track are great and overall, it’s an alright track. I get what he’s going for here, but it doesn’t particularly move me as much as it might move someone who can relate to this track more.

Macklemore speaks on drug abuse and the death of his friend Kevin through that. Macklemore sounds very passionate on this track and the production gives it a sort of inspiring feel with each verse up until the fading close. Definitely feeling this one.

7. St. Ides
Produced by Ryan Lewis
This track just feels so subtle. The production is calm, as well is Macklemore’s vocal delivery. He’s just reminiscing on this one.

It’s dull, but given the correct mood, I may find myself enjoying this one a bit.

The subject is basically about lies and telling people what they want to hear or “Need To Know”.

Macklemore’s verse is solid, but Chance The Rapper steals the show here. Love that line about his daughter only song while friends and the line about meeting the devil who come in all forms.

HA! Chance just fits so well over this type of production. This really feels more like it’s “Chance The Rapper featuring Macklemore”. He might have the best verse on this album honestly, which it seems he’s been doing lately. I dig this track.

9. Dance Off
Featuring Idris Elba & Anderson.Paak; Produced by Ryan Lewis & Joshua Karp
I’m gonna be very blunt here. I want to stab everyone who contributed to making this track (minus Anderson.Paak).

The track starts off with Idris Elba sounding like audio from a glow stick rave edition of an old Mortal Kombat arcade game. I mean, every time the hook comes in with him shouting, “GET ON THE FLOOR”, I just imagine Scorpion and Sub-Zero having a glow stick battle in the middle of a dance floor and that’s not what I want to be envisioning.

No. I can’t have my mom, my niece, my homies, or even my neighbors dog catch me listening to shit like this. Anderson.Paak’s feature on this track is fine and pretty minimal, but still… why’d you do it Anderson?

I get that this was supposed to just be a silly and fun track, but with shit like this I think the album is just detracting from what it’s supposedly about. It’s not good, at all. I hope I never hear this shit again.

I wanna be like Hugh Jackman, you know, JACKED MAN

Okay look, I thought after the last track we’d get off these incredibly corny lines, but obviously not.

No lie. I saw a woman in a minivan with a golden retriever in the backseat bumping this song. As I slowly looked over to the car in awe the dog looked me in the eyes. All I saw was pain.

But how do I myself feel about this track? Well, I don’t drive a minivan with a golden retriever in the backseat.

I never won the spelling bee,
I could read people’s energy

Is Sir Macklemore about to go Doctor Doom on us? Sounds like one hell of a grudge to hold.

Throughout this track Macklemore makes the statement , “Make better music”, I’m seeing that as a statement towards himself. But is that what he’s doing? Meeeehhhhhh.

Macklemore and YG on one song together was definitely on the list of shit I never expected to read. I dig the production on this track. YG doesn’t spit the verse of his career or anything, but it’s solid. I dig this track.

12. The Train
Featuring Carla Morrison; Produced by Ryan Lewis & Joshua Karp
Not familiar with Carla Morrison, but her vocals on this track were beautiful.

The track is about departure, mainly Macklemore getting on this “train” that is referenced sometimes literally and metaphorically. He’s not looking back or going off track and he wants to be here to stay.

Overall, the track is dull to me, except for Carla Morrison’s vocals over this production.

13. White Privilege II
Featuring Chance the Rapper; Produced by Ryan Lewis, Ahamefule Oluo, & Joshua Karp
It’s a mess. And it’s even more of a mess now that’s it on this album. Surrounded by all these tracks that just deal with Macklemore’s repeated stories about his ride to success and reminiscing and then his tracks about mopeds, being Brad Pitt’s cousin, and Mortal Kombat glow stick battles…it just doesn’t fit. Granted, I do appreciate the song, I just think that as a single it’s more powerful, because it stands as its own thing and creates a conversation regardless of appeal.

The second verse Macklemore gives on this track is passionate and powerful. The verse from the viewpoint of the mother who listens to Macklemore is interesting. The snippets of the two opposing sides giving their opinions on everything going on with black youth being killed and going up in arms adds more to the song as far as a discussion goes afterwards. And Jamila Woods gives a dope feature, coming from the viewpoint of  someone on the inside looking out.

Your silence is a luxury
hip-hop is not a luxury
What I got for me, it is for me
What we made, we made to set us free

Nice words to close off the album.

After listening to this album I have an odd assortment of questions to ask Macklemore. One of them would be “Have you seen more than 5 episode of Martin?”. Nothing to do with the album really, just curious

This album is decent. Most of the high moments are either due to the production or the features. Every now and then Macklemore comes in and shines throughout, like on the opening track “Light Tunnels” and “Kevin” , but then we have just terrible track like “Brad Pitt’s Cousin” and “Dance Off” that just make you wonder what this has to do with the “Unruly Mess” that Macklemore has made. If anything those are just another package of messes to add to the list.

On the track “Bolo Tie” the statement is made “Make better music”. Does Macklemore do that here? I mean….to sum it up this album is pretty safe. It’s not gonna bring his career down and it’s not gonna boost it up any further. I definitely prefer The Heist over this though. Risks were taken, but they didn’t really blow me away or even make me feel as if they were necessary. They just make me go “Well, at least you tried!” Which is sort of the feeling I get from this album. Decent.