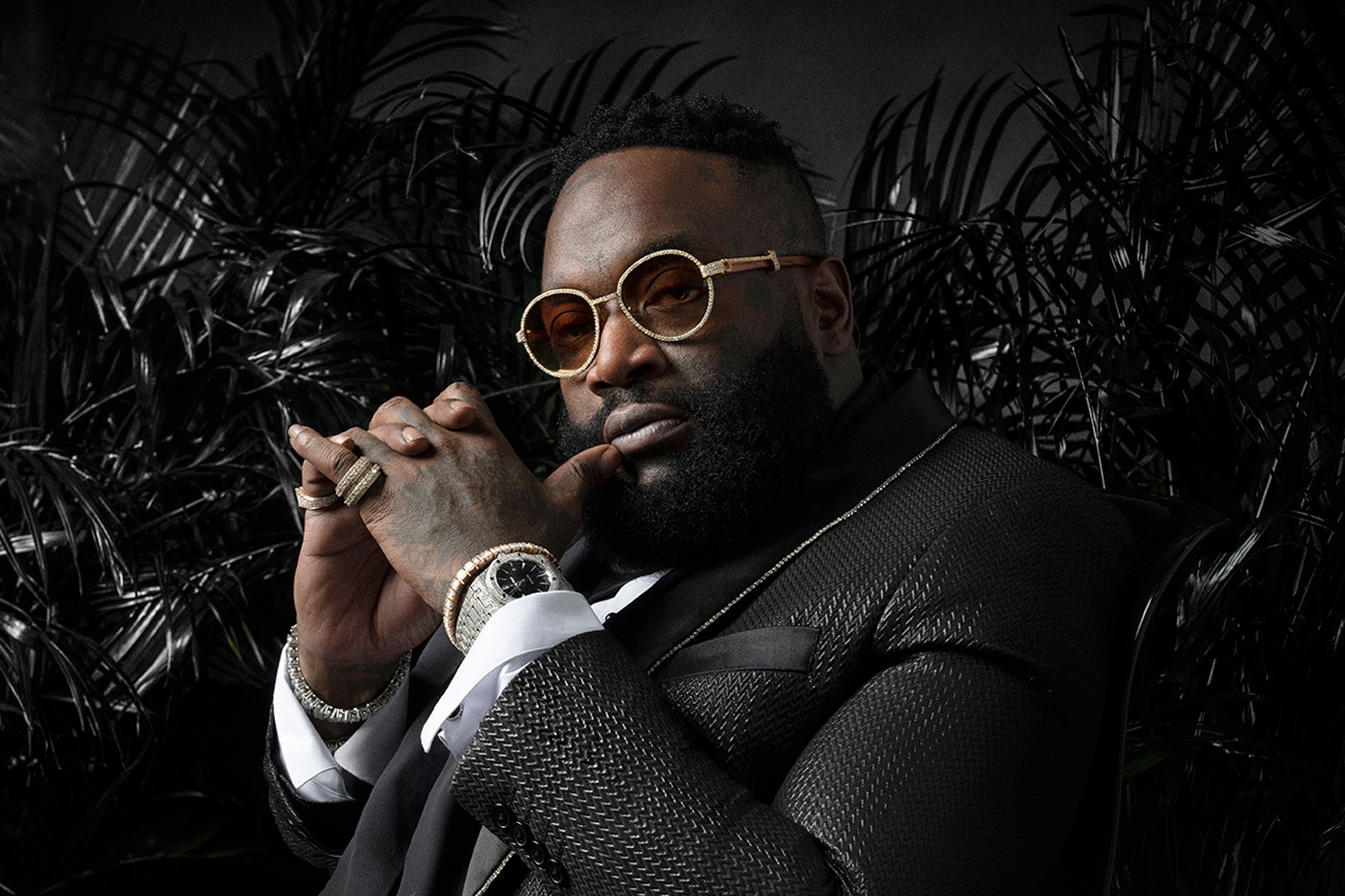 Am I the only one that remembers that Rick Ross was trying to release Port of Miami 2 back in 2008? Then it was called Port of Miami 2: Born To Kill and one song for the project (If I can remember correctly) was the Pharrell Williams featured “Get Down.“ It may have taken him 11 years to get back to it but with his 10th album, Rozay finally releases Port of Miami 2.

This album is, of course, the sequel to Rick Ross’s 2006 debut Port of Miami and a lot has changed. While then the Florida rapper was calling himself a boss, that is a reality these days with his a successful rap career, a successful label/brand with Maybach Music, as well as his ventures outside of music.

But after over a decade into his career, with countless of high profile cameos and a multitude of projects, is the biggest boss still relevant in today’s current rap climate. Also, can Ross still release an album that stands up to his previous work? Let’s find out as we look at Port of Miami 2. R.I.P. Black Bo.

1. Act a Fool
Featuring Wale; Produced by Beat Billionaire
The album doesn’t get off to a great of start with “Act a Fool” featuring Wale. This was also served as the first single/teaser for Port of Miami 2. The song sounds dated and the Wale feature doesn’t help matters. On a more positive note, it’s fun to sing along with Rozay on the hook: “Yeah, that boy a fooooooool!”

2. Turnpike Ike
Produced by Jake One
I was happy to see Jake One produced this track; I’ve been a fan since White Van Music. And the production and Ross delivers for the most part as the rapper delivers expensive bars. But this feels more like an album cut and not a single or a song that should receive a music video. Not a bad song but just okay.

3. Nobody’s Favorite
Featuring Gunplay; Produced by Trop
At first, I wasn’t into this song the much. But the dark bass-heavy production and the rhyme cadence eventually drew me in.

Do y’all remember when Gunplay had a viable career and even out rapped Kendrick Lamar back in 2012? That was crazy. Either way, Don Logan held his own here and helps Ricky turn in a good song.

4. Summer Reign
Featuring Summer Walker; Produced by Edgar “JV” Etienne & Harmony Samuels
I was in as soon as I recognized the SWV “Rain” sample. I also appreciate that Ross put Summer Walker on a song titled “Summer Reign.” Other than that it’s mostly a “let me spoil you girl” rap song but the well placed sample made it a win for me.

5. White Lines
Featuring DeJ Loaf; Produced by CAMEone & Rowan
“I hold my head up to the sky/While she be snortin’ white lines” might one of the most Rick Ross hooks of all time. And this isn’t a cautionary tale about drug use either. DeJ Loaf, who makes a second straight appearance on a Rick Ross album, does background vocals on the already mentioned hook (Which is unnecessary now that I think about it). It’s an alright song but forgettable.

6. BIG TYME
Featuring Swizz Beatz; Produced by Just Blaze
If I had to truly pick, Just Blaze is probably my favorite Hip-Hop producer of all time. So I was happy to see him on production for the song “BIG TYME.” And the production comes through. It sounds huge. My only issue with the song is that I feel like Rozay could have come better with the verses. I can’t put my finger on it though. Maybe it’s the weird first line (“Surviving R. Kelly, registered pedophiles”) or that it feels like it mostly hook (“Big Time!”). It’s still a highlight on the album though.

7. Bogus Charms
Featuring Meek Mill; Produced by Tarik Azzouz & STREETRUNNER
Meek and Ross link up once again on “Bogus Charms.” Over introspective production, both rappers talk about street tales, growing up in the hood, and being grateful for where they are now. It’s what’s you expect and I can see this coming off boring to some, but other than not feeling the Sam Harvey-sung hook, it all still works.

8. Rich Nigga Lifestyle
Featuring Teyana Taylor & Nipsey Hussle; Produced by Cardiak
It’s cool to see a Nipsey Hussle feature here. At first, I thought it was an older verse but he does talk about Tekashi 6ix9ine snitching so it can’t be that old. Apparently, this song shares samples with “Sweet” by Jay-Z and Nas.; I surprised I didn’t catch that at first. The Teyana Taylor chorus is serviceable just like the song as a whole. R.I.P. Nip.

9. Born to Kill
Featuring Jeezy; Produced by Trop
It still feels weird to see Rick Ross and Jeezy on a song together. Props to them for getting over that beef they had years ago. The thing is, I wish they would have squashed it when they were both at their prime. Think about a song with peak Snowman and Rozay. “Born to Kill” is sadly not that. I don’t mind the low bass-heavy beat but the whole thing feels paint-by-numbers. Meh.

10. Fascinated
Produced by Sam Sneak & Dollarz
I actually like “Fascinated.” Here are some random thoughts about it:

11. I Still Pray
Featuring YFN Lucci & Ball Greezy; Produced by DJ Toomp
The intro to this track is a recreation of a news report about Rick Ross being hospitalized (Which actually happened). The production sounds like it samples Al Green or something and it while the influence is there, it’s all original as far as I know. This with the verses provided give the track an introspective vibe. I didn’t mind the features here but nobody stands out either.

12. Running the Streets
Featuring Denzel Curry & A Boogie wit da Hoodie; Produced by Major Nine
I think Rozay could have cut this song or the one before because they both have the same vibe (Maybe better sequencing). As for the features, I didn’t mind Denzel Curry but I’ve never understood the appeal of A Boogie wit da Hoodie. I still don’t (I do kinda like the hook though “Runnin’, runnin’, runnin’ the streets”).

13. Vegas Residency
Produced by Noc & J.U.S.T.I.C.E. League
Next is “Vegas Residency” aka the song that Ross may have dissed Kanye West (or at least Kanye West’s choices):

Yo, watchin’ Kanye interview, feel like I wanna cry
For every innocent brother charged with a homicide
Went from battle raps to now we wearin’ M.A.G.A. hats
Dade County, nigga, mansions up in Tamarac
Never golfin’ with the Trumps and I give you my word
Back to comin’ out the trunk, chargin’ 20 a bird
Another seizure, so I woke up in intensive care
Pray you treat a poor man like he was a millionaire

While we can’t be sure how Rozay feels about Yeezy, his trademark flow over piano keys work well here. The level of production immediately goes up here mainly due to J.U.S.T.I.C.E. League. This one is a keeper.

14. Maybach Music VI
Featuring John Legend & Lil Wayne; Produced by J.U.S.T.I.C.E. League
It’s time for the annual “Maybach Music” track. It’s what you expect at this point with luxurious instrumentation that makes you feels rich for a couple of minutes. It’s good. But my problem with the song is what’s not here. “Maybach Music VI” was originally supposed to have verses from Pusha T and Lil Wayne, despite the two rappers long-running beef and without each knowing about the other on the song. Right before the release Ross had second thoughts and now we only get the Weezy verse.

This album needed the full version of this song if only for the wow factor. On a project that doesn’t have many attractions, this could have been the biggest. Ross should have pulled the trigger.

15. Gold Roses
Featuring Drake; Produced by OZ, Syk Sense, Vinylz & The Rascals
The best song on Port of Miami 2 is the last track. This feels like something you’d hear on a Drake project but it works here too. In a world we have multiple songs on the airwaves with Ross and Drizzy (as of this writing), this is the better of the two. We may never get a full project from these two rappers (YOLO!), but they always turn in good collaborations.

Not much happens on Port of Miami 2 that we haven’t heard from a previous Rick Ross album. For a rapper that’s good at creating memorable moments, there are barely any on his 10th project.

Rozay’s ear for good production is still present as there arguably isn’t a bad beat on this album. And if you are a fan of Ross’s booming voice and flow, that’s here in abundance too.

But that’s the issue too. We all have seen this before from Ross many times before and on Port of Miami 2, he doesn’t do it at a high level or bring anything new. At the end of the day, Rick Ross is still a boss. But for somebody with so much charisma, it’s weird that he comes off as a boring boss on the sequal to his debut album