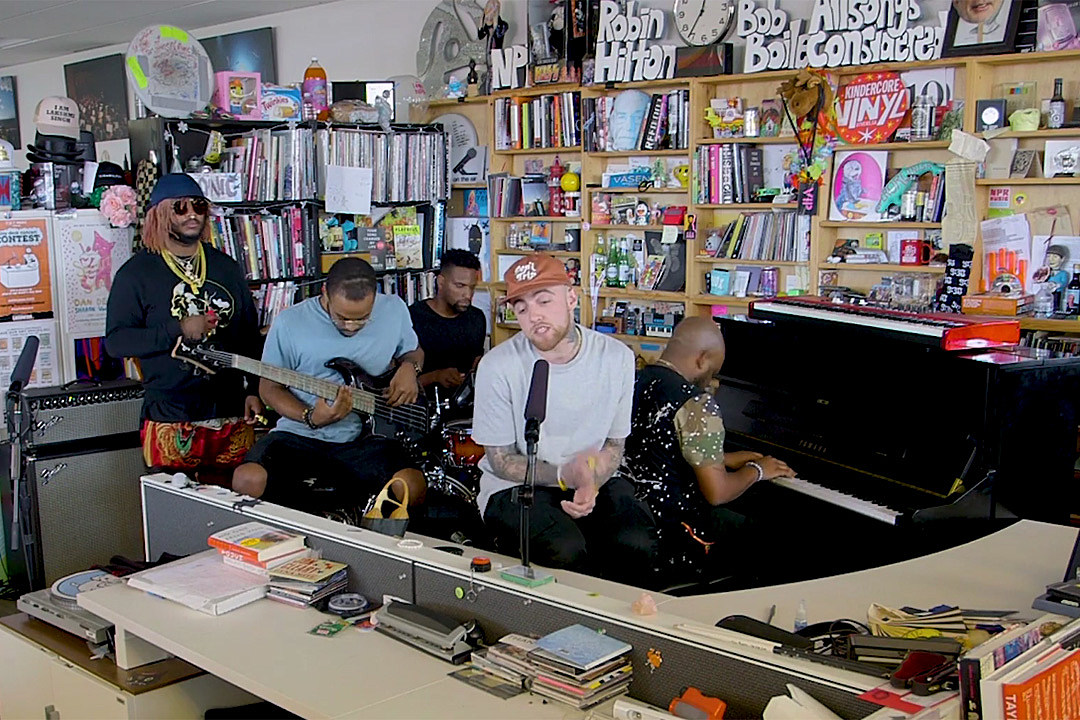 Miller Mac! After a break-up that lead to alcohol abuse, I feared the worst for Mac Miller since his recovery from drugs back in 2013. Judging by his NPR performance, we get to see hints of the same smiling kid we meet back in 2010 when he released the KIDS mixtape (Remember mixtapes?). My review of Miller’s latest album, Swimming is that it should be played in enclosed spaces so all the lyrics and production can be consumed not letting a single second from this album be lost. He’s going to be fine; I should’ve known by the title of the first single, “Self Care”, that he was going to get it together, but it’s after watching this performance I understand the title of Mac’s fifth album. He is in the water and while it seems overwhelming and crashing down at times, he will not drown.

“There was a shift in Mac Miller’s boisterous demeanor as he started the third of his three-song Tiny Desk set. It’s the first time he’s performed tracks from his new album, ‘Swimming,’ in front of an audience. On “2009,” he rubbed his chin with clinched eyes, looking like a young man who’s beginning to crack the code. Backed by a piano loop and a string quartet, he reflected on his journey’s peaks and valleys thus far.

“I ain’t asking why no more I know I’ll take it if it’s mine I don’t stay inside the lines It ain’t 2009 no more Yeah, I know what’s behind that door.”

With nearly a decade under his belt at 26 years old, these words ring like an artist twice his age.

We were introduced to Mac Miller via 2011’s XXL Freshman Class, which featured a special crop of MCs such as Kendrick Lamar, Meek Mill and YG, all of whom are now considered in the upper echelon of hip-hop. After his big splash, he’s been able to find a groove and consistently release quality rap records, ultimately keeping his name in the conversation with the other young greats. His 2011 album, Blue Slide Park, reached No. 1 on the Billboard 200, the first independently distributed debut album to do so since 1995’s Dogg Food by Tha Dogg Pound. These consecutive triumphs amassed plenty of fame, fortune and insurmountable obstacles, causing a stumble here and there. Throughout the years, however, Mac has brushed himself off and put it in the music. For this performance, Mac Miller invited frequent collaborator Thundercat, who graced the Tiny Desk last year and will join Mac on tour this fall. Thundercat put on a dazzling shaker routine and played the deep centrepiece bass line on “What’s The Use?” These Swimming iterations don’t veer far away from the recorded versions, but here, his lyrics seem easier to interpret under live instrumentation.