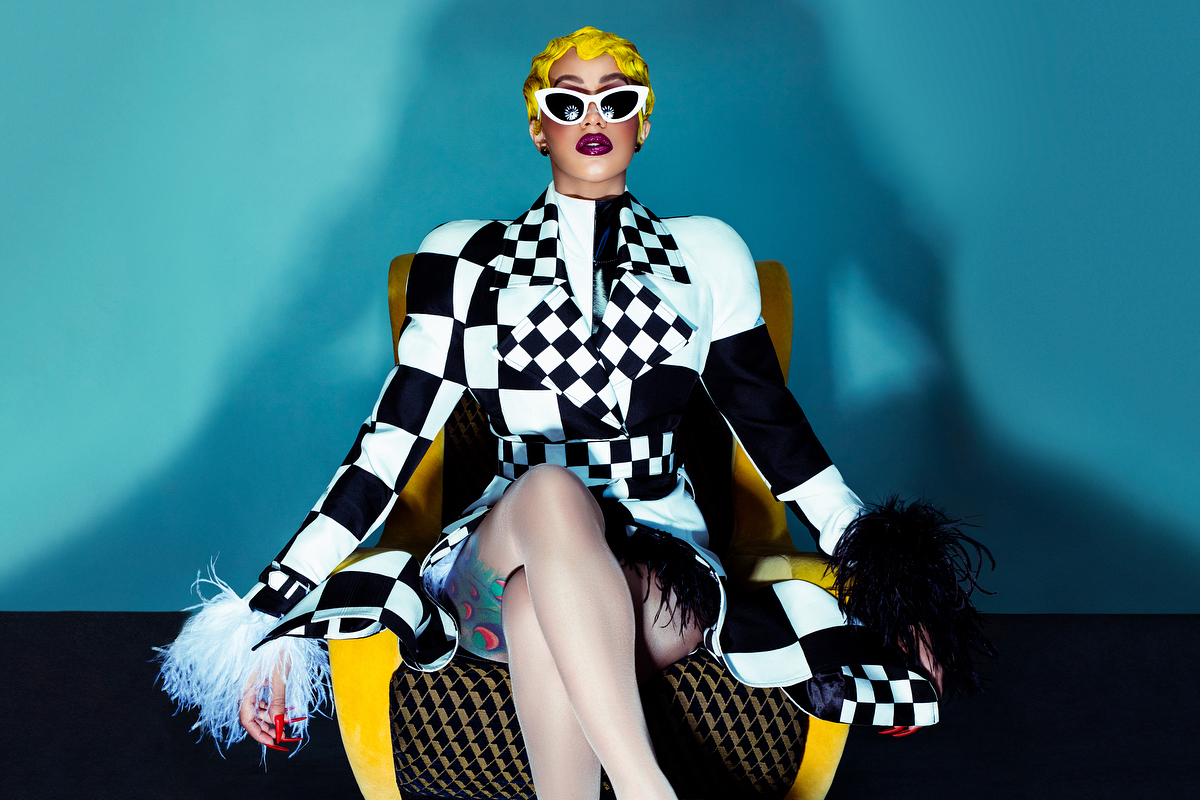 The come up of Cardi B was televised. From stripper to Instagram notable to reality television personality to legitimate rap star. The whole world saw Cardi B’s rise to stardom and we loved it. While we laughed at her antics on IG and her ratchetness but sincerity on Love & Hip Hop, it wasn’t until “Bodak Yellow” that a viable rap career was possible (Although, she was already bubbling on the mixtape circuit).

After the countless cosigns and charming media appearances, the fans of Cardi B wanted an album. Invasion of Privacy is that album. And while everyone feels like it was a lone wait, commercial and sales wise she has already delivered. Invasion of Privacy not only landed at #1 on the Billboard 200 (Making Cardi only the fifth female rapper to do so), the project was also certified Gold upon it release.

But how does the album sound? Here is the review of Cardi B’s debut studio album, Invasion of Privacy.

1. Get Up 10
Produced by The Beat Bully, DJ SwanQo, & Sean Allen
On the intro Cardi B gives listeners insight to her rise to stardom (“Mama couldn’t give it to me, had to get it at Sue’s” or “I went from rag to riches, went from WIC to lit, nigga”). The thing that stands out to me id that this is basically her version of Meek Mill’s “Dreams and Nightmares (Intro)” from the piano to the tone change marked with a beat drop. This is not a bad thing as Cardi pulls it off. It also may be Cardi’s best rapping on the whole album but I’ll hold off on that statement. Good start.

2. Drip
Featuring Migos; Produced by Cassius Jay & Nonstop Da Hitman
This feels like a standard song that rolls out of the Migos factory. The thing that helps this track is that Cardi, Offset, Takeoff, & Quavo have developed chemistry with each other. I remember this getting released right after “Be Careful” and it didn’t make as much noise but it fits okay as the second track off this album.

3. Bickenhead
Produced by Ayo, Keyz, & NES
There was really no reason to remake Project Pat’s “Chickenhead”, but it’s hard to not bob your head to that classic beat. “Bickenhead” is one of those song that makes you remember the original and then just go listen to that instead.

You can technically throw this in with the current generation’s love for Three 6 Mafia. Add this to the same playlist that has “G-Eazy’s “No Limit”, A$AP Ferg’s “Plain Jane”, Jeezy’s “Bottles Up”, and those hundreds of freestyles over “Who Run It”.

4. Bodak Yellow
Produced by J. White & Klenord Raphael
This is the one that changed Cardi B from a stripper that was trying to rap to a rapper that use to strip. I’m not gonna say much about the song because if you don’t haven’t heard this song I don’t know how you found this review. Hell, even Denzel Washington know some words to “Bodak Yellow”.

“Bodak Yellow” was a runaway success eventually claiming the top spot on the Billboard Hot 100 as well as the main reason that this album was certified Gold on it’s release.

5. Be Careful
Produced by Boi-1da, Frank Dukes, & Vinylz
I came around to liking “Be Careful” more after seeing a pregnant Cardi B performing this on Saturday Night Live. Not as much as the women who’ve dealt with cheating men, but it’s an okay song that is helped a lot because of the production. I also think the song would have been better with a R&B songstress on the hook instead of Cardi but it is something endearing about her singing on the hook.

6. Best Life
Featuring Chance The Rapper; Produced by Boi-1da & Allen Ritter
The combination of Chance The Rapper & Cardi B was surprising for two reasons. The first is that I didn’t see this one coming. The second is that it’s surprisingly works. The vibe of song is charming and fits with the Instagram mantras of living your “best life”. Chance steals the show but that’s to be expected.

7. I Like It
Featuring Bad Bunny & J Balvin; Produced by J. White, Tainy, & Invincible
This song samples Pete Rodriguez/The Blackout All-Stars’ “I Like It Like That”. Nah. Skip.

8. Ring
Featuring Kehlani; Produced by Needlz & Scribz
Cardi & Kehlani describe how their lovers don’t call them like they use to. First off, who the hell calls people in 2018? All jokes aside, this song sounds dated; like early 2000’s or something. Not bad but totally forgettable.

9. Money Bag
Produced by J. White
Card B is straight stuntin’ on “Money Bag”. She is rapping about parking her Bentley truck on a “Versace driveway” and making “40 bands by 4pm”. It’s ridiculous but Bardi needs time to celebrate and she deserves that. But is it a good song? No. Maybe after getting paid and driving to club. But while sitting in front of a computer screen in my apartment, it sounds like a parody.

10. Bartier Cardi
Featuring 21 Savage; Produced by 30 Roc & Cheeze Beatz
“Bartier Cardi” was the follow up to “Bodak Yellow” and while it didn’t match the success, it didn’t do too bad. I never really vibed with the song because it feels exactly like a follow up to “Bodak Yellow” (If that makes any sense). I also keep forgetting that 21 Savage is on this song. Props to him because I felt the same way about Post Malone’s “Rockstar” and 21 is still cashing checks.

Sidenote: I hope Cardi B and Offset stay together only because she says his name four times on the hook.

For those that were expecting for Cardi B and YG to do new anthem for the Bloods, this ain’t it. Although, Cardi does reference the gang numerous times on this album. But that doesn’t really have anything to do with this track so we’ll move on.

12. Thru Your Phone
Produced by Benny Blanco, Watt, & Bell
“Thru Your Phone” is a more aggressive version of “Be Careful”; instead of asking her man to be careful with her heart, Cardi is threatening to serve her lover “a bowl of cereal with a teaspoon of bleach”. With that being said, it’s a well made song and Cardi really paints the picture of finding some incriminating stuff on her man’s phone:

And fuck your little fake ass friends
Come around actin’ like they my bros
I seen y’all little group texts
Where you all like to brag about your hoes
And you can tell your little bitch
I screenshotted all her naked pics
Oh, you wanna send nudes to my man?
Wake up and see your boobs on the ‘Gram?
Lil’ bitch, I cannot stand you, right hand to Jesus
I might just cut all the tongues out your sneakers
Smash your TV from Best Buy
You gon’ turn me into into Left Eye

These are some of the best rhymes on the project because how natural they feel. It also explains why Cardi B is championed by many women.

13. I Do
Featuring SZA; Produced Murda Beatz & Cubeatz
A lot of people were surprised to see a Cardi B and SZA on a song. These people obviously haven’t heard “The Weekend”.

On the final track of the album, Cardi salutes the bad bitches and tells them to do what they want. If that means dating a man who has been in and outta jail or smacking a chick, then so be it.

It’s understandable why “I Do” is the final song as it fits with freedom and the unapologetic way of Bardi. It’s a good song and it ends Invasion of Privacy on a high note.

You can’t help but be happy for Cardi B. After all the doubters, not only has she produced and been featured on multiple hits, she also now has a commercially successfully album with Invasion of Privacy. And for that alone, Cardi should be proud of this album.

But here’s the thing, our being happy for Cardi B’s success may be clouding the public’s judgement on the quality the album. It’s not a terrible album and Cardi has come a long way in terms of rapping (No matter who wrote the rhymes). But there are a lot of songs here I wouldn’t listen to after this review. And in terms of Hip-Hop, there are almost no rewindable or well crafted lyrics. If you not about being a “bad bitch” or a scorned lover, Invasion of Privacy may not exactly be for you.

If you are already invested in the story of Cardi B, you have listened to this album multiple times and loved it. For others, Invasion of Privacy is not album of the year material, but it may be worth a listen for those curious or want a close up view of the meteoric rise of Cardi B.