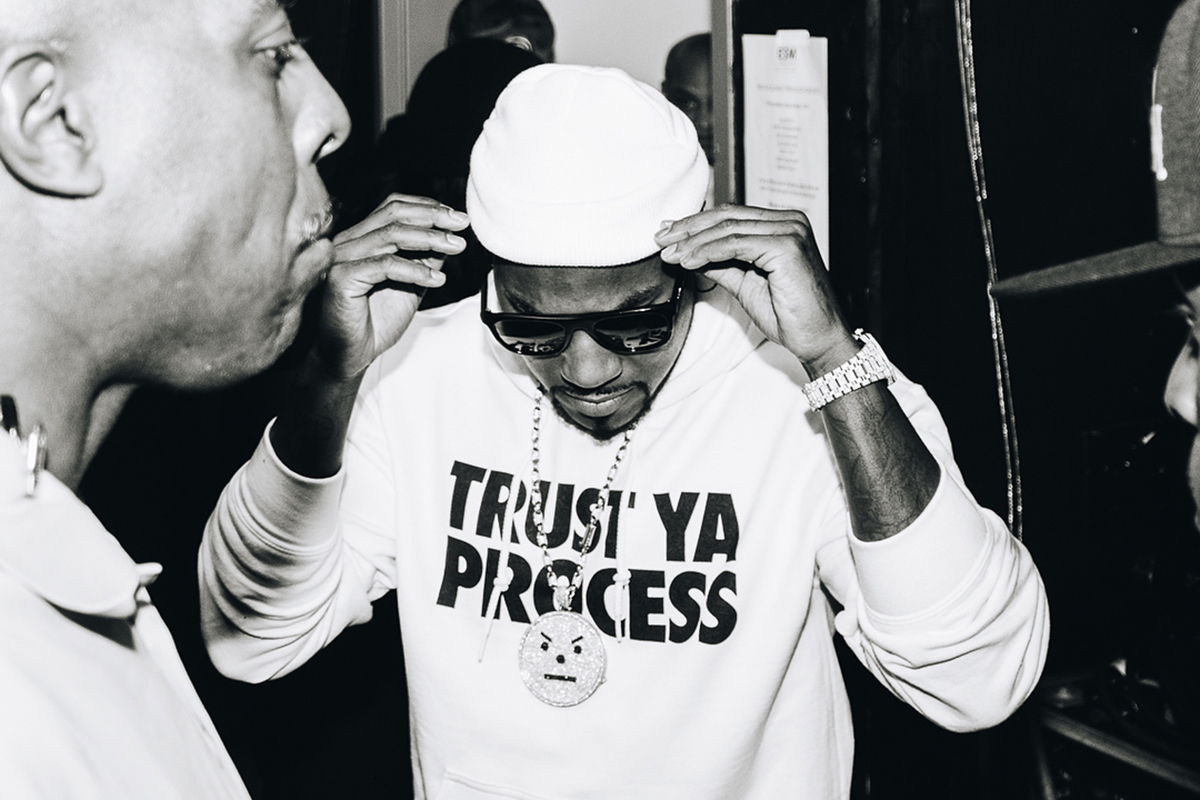 Jeezy doesn’t get the respect he deserves. I’m not saying that he doesn’t get recognized for his accomplishments at all, but when you think about his career as a whole, his name doesn’t get brought up when it should be. Maybe it’s due to the rise of Gucci Mane, a person that has had a hand in many of the careers of today’s up and coming Southern rappers but was also (at one time) Jeezy’s enemy and rival. Maybe it’s because Jeezy dropped the “Young” from his name and has steadily backed away from “The Trap” in terms of content (It happened around the time “My President is Black” dropped and he started wearing Malcolm X glasses).

Even with me saying Jeezy doesn’t get the deserved respect, that really hasn’t stopped him much commercially. His last project, Trap or Die 3, debuted on the Billboard 200 at #1 just last year. And if you listened to Jeezy’s recent interview with The Breakfast Club, not only does he confirm my statement about backing away from the “Trap Music” label, he also feels that he is doing well in terms of goals, career wise and financially, despite sometime be called washed up.

So with all that said, Jeezy’s eight album, Pressure, should give an interesting look at The Snowman’s current content as well as the way his career may go in the coming years. Let’s take a look at Jeezy’s latest release.

1. Spyder
Produced by D. Rich
This album starts off with one of the most Jeezy sounding songs you could ask for. And that’s not a bad thing. Over D. Rich production, Jeezy raps about counting money in front of the haters and motivates listeners to get more (“Ball hard, go bigger”). I can see this fitting on one of Jeezy’s older album with no problem. To me it’s a serviceable start to the album but die hard Young Jeezy fans with eat this one up.

2. Cold Summer
Featuring Tee Grizzley; Produced by P.C.
I listened to this song a few times but it wasn’t until doing research for this review that I found out the beat is from a 2Pac song off Better Dayz. Was “Street Fame” a big posthumous 2Pac song and I missed it (Somebody get P-Body on the phone!). Maybe if I knew that while listening to “Cold Summer” I would have liked it better, but it still sounds like a forgettable Jeezy song.

Ever since his terrible outing during the cypher at the BET Hip Hop Awards, I can’t understand the appeal of Tee Grizzley (And that’s even after a Jay-Z cosign). His verse on this song doesn’t help matters.

3. In a Major Way
Featuring Payroll Giovanni; Produced by Gotti Rock Solid
This sounds like a Mannie Fresh beat from the late 90’s. Not dissing old Cash Money songs, but the production here is jarringly outdated to the point that I thought it was a remake or something. Maybe that was the point. The song and the verses are not terrible but I can’t get over the beat.

I never heard of Payroll Giovanni but I know he’s from Detroit and that this is the second song in a row on this album that Jeezy has featured a Detroit rapper. I guess Jeezy loves Motown.

4. Floor Seats
Featuring 2 Chainz; Produced by D. Rich
Here is the mandatory 2 Chainz feature of the album. Coincidentally enough this is also the stripper song of the album. Not saying this is the only stripper material of the album, but the best one in terms of what strippers could shake their asses to. This is also a great song to mark the occasion if you are ever lucky enough to be sitting courtside at a Atlanta Hawks game. The highlight on the track might be Tity Boi’s verse:

Boy! Ya last if you ain’t in first place
I think you in my parking spot, that’s the first place
Worse case scenario, I want some camel toe
And in a fruit fight, I’ll bust ya cantaloupe

How can you not at least smile at that?

5. This Is It
Produced by Vinylz, Big White, & DJ Spinkling
I liked the hook on “This Is It”. I can see drunk people in the club singing the hell out of this:

This is it, it’s a hit
This is it my nigga, this is it
Hit a lick, half a brick
Then I came right back, poppin’ shit

Simple but it’s infectious, especially over the low and menacing production. I think this is an example of how good Jeezy is at crafting choruses (Remember “What Would Jeezy Do?” from Kanye West?). You’ll nod your head to this one.

6. Bottles Up
Featuring Puff Daddy; Produced by P.C.
“Bottles Up” is probably my favorite track off Pressure, even though on paper it sounds weird. Jeezy using the Big Tymers’ flow over “Tear Da Club Up” with Diddy doing ad-libs. But now that I write it out, that actually sounds amazing and is probably the reason I like this song in the first place. This song also has a dope music video.

7. Valet (Interlude)
Produced by Djay Cas
On this interlude, somebody gets in their car (Of course after getting their keys from a valet) and Jeezy is playing on the stereo. I thought this may have been an older song or something but it’s actually new. Which is weird because it’s actually a dope song and Jeezy just gives us a snippet of it. Wish we got the full thing here.

8. Respect
Produced by Gotti Rock Solid
I was feeling so-so about “Respect”, but Jeezy won me over with the his lyrics:

Grown ass man homie, I ain’t wit the clown shit
You New Edition niggas, got me on my Bobby Brown shit
Grumpy ass niggas, yeah y’all howlin’ at the moon, bitch
Be on that front line like Charlie Sheen in Platoon, bitch

That is just vintage Jeezy right there. He has never been lyrical but he has always had word play. The song as a whole is about Jeezy demanding respect and he deserves it.

9. Pressure
Featuring Kodak Black & YG; Produced by D. Rich
Jizzle, Kodak Black, & YG on a track together makes sense. I don’t know if it should have been the album’s title track, but whatever. The production actually sounds like some you’d hear on a YG album. Speaking of YG, either I haven’t been paying attention or the last verses I’ve heard from him show improvement. Kodak Black’s high pitch on the other hand is getting more irritating by the day.

This is one of those song where it’s okay but should have been better with the features alone. That happens a lot in rap music.

10. Like Them
Featuring Tory Lanez & Rick Ross; Produced by Neenyo, Tone Mason, Frank Dukes, & Chigz
Time for me to be honest: I don’t fuck with Tory Lanez’s music. I’ve tried. But now every time I hear his music or see him as a feature, my eyes glaze over. So that’s what I’m working with as Tory does the hook on “Like Them”. For that reason alone, I don’t like this song.

Besides that, this feels like a Rick Ross track. From the hook to the production, you could have told me this was Rozay featuring Jeezy and I would’ve believed it. Maybe that’s what it was originally.

11. The Life
Featuring WizKid & Trey Songz; Produced by Cardiak & Frank Dukes
You know another thing I don’t like? When rappers have multiple singers on one song when one could have done the job. Like what 2 Chainz did with “It’s A Vibe” or Busta Rhymes with “Decision”. That’s what happens on “The Life”. Why is WizKid and Trey Songz sharing a hook when I can barely tell them apart?

“The Life” is probably a song for the ladies. Not to the point where Jeezy is catering to them with the lyrics, but the mellow beat and hook (“Livin’ that good life!”) is ready to be played in the background as your favorite Instagram model stares into her camera and lip syncs to it.

12. American Dream
Featuring J. Cole & Kendrick Lamar; Soundsmith Productions
Jeezy ain’t stupid. It’s a reason he put out the Pressure tracklist early with the features listed and placed this track towards the end of the album. The Hip-Hop world has been demanding that promised collaboration album by Cole & K.Dot and “American Dream” is probably the closest we’re gonna get for a while. It’s a good song. The choice in production was a good pick for these rappers to connect on. And even though King Jerm thinks that Jeezy sounds out of place here, it shows what other rappers think about him that this song was actually made.

On some Hip-Hop shit though? Why didn’t Kendrick turn in a full verse? This look even crazier after hearing Cole’s great verse (“I just drop a gem or two within a few verses I sing”). According to Jeezy, everybody knew the other person would be on the track. I wonder.

13. Snow Season
Produced by P.C.
As we get closer to the credits, Jeezy reminds us that it’s in fact Snowman season. And to his credit, he leaves the same way he came in:

I got three or four baddies with me
And I swear that them bitches ain’t leavin’
Know two or three niggas that switched up
That’s a charge, ya’ll fucked up for treason
Took a hundred thousand dollars out the safe
Blow it all for no muthafuckin’ reason
Pull up on the whole world with the top down
Middle finger, yeah bitch, it’s snow season

Jeezy rides off counting money while motivating his followers over a sound system ready production. It’s always good to end things on a high note and that’s the way The Snowman ends Pressure.

On this outing Jeezy doesn’t reinvent the wheel in terms of what he has been releasing that in the past few years. That’s a great thing if you are a fan of this recent version of Jizzle. But if you were looking for a change in sound or even a rise in quality level, you probably won’t find it here. While this album may not boost the rapper’s career, there are enough standout moments on Pressure for Jeezy to safety declare another season of snow.