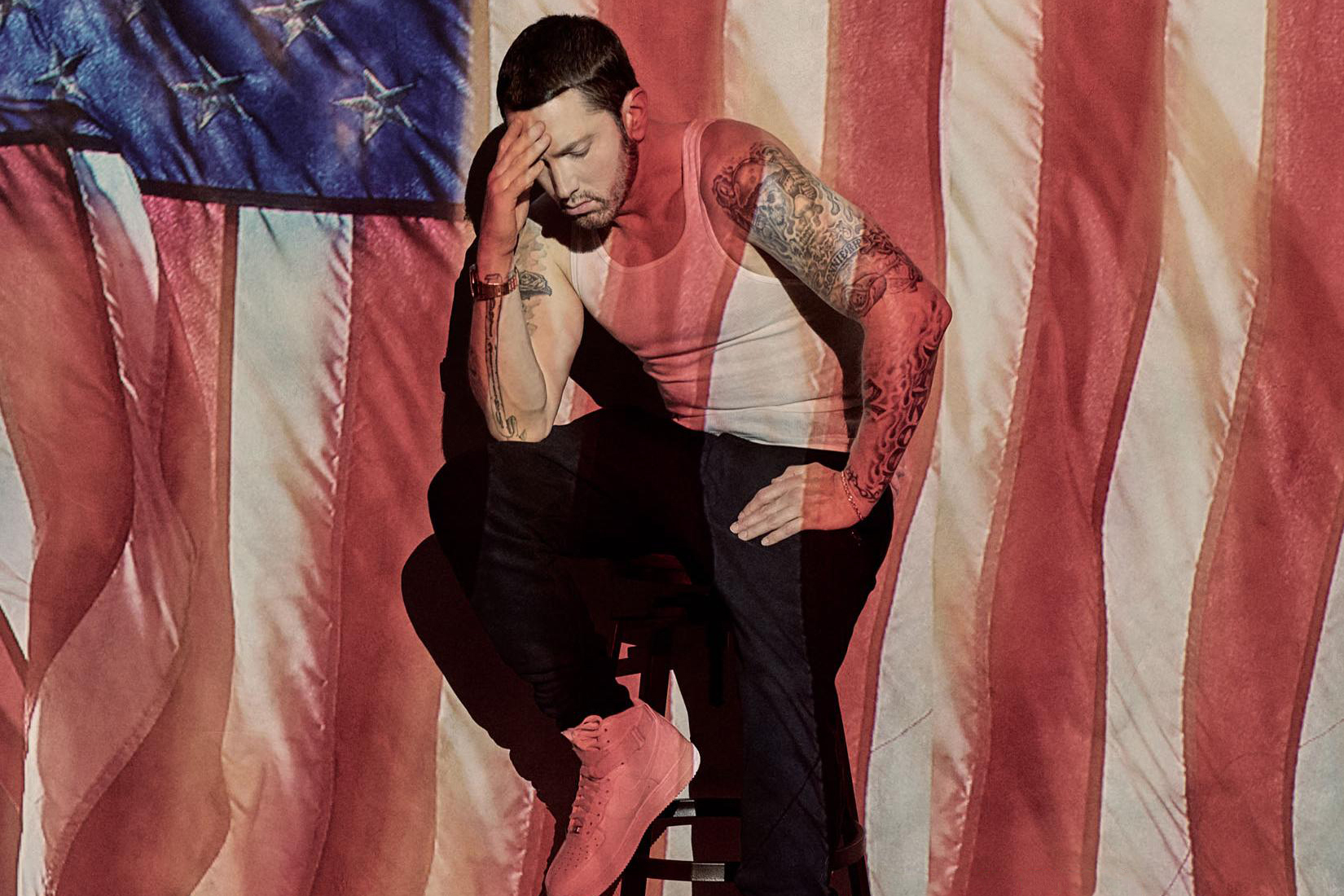 Eminem. Some would call him one of the greatest rappers to ever touch a mic. He holds two undeniable classics under his belt with The Slim Shady LP and The Marshall Mathers LP, the latter which sold nearly 2 million copies first week and won Eminem a Grammy for Best Rap Album in 2001. Since the release of this album Eminem has had a fairly shaky time with matching the quality of previous work. While projects like The Eminem Show did well with satisfying fans, other projects such as Encore did not.

After the release of Encore Eminem suffered many pitfalls, from the short lived remarriage to his wife Kim, to the tragic loss and friend and rapper DeShaun Holton, mostly known as Proof. These tragedies in Eminem’s life sucked him into what seemed to be a downward spiral as became more reclusive and relapsed back into drug addiction.

It wasn’t until about 5 years after the release of Encore would we hear another Eminem album, which would be titled Relapse. An album looked upon as a “comeback”, but not entirely received as one. These mixed reviews carried over even more so onto the next album Recovery, which spawned chart topping singles such as “Not Afraid” and “Love The Way You Lie”. Though mixed in reviews, commercially the album put Eminem back on a higher mainstream level than the previous album did.

Years later we received the sequel to his iconic LP, The Marshal Mathers LP 2. Some saw it as his best work since the early The Eminem Show, while others just saw it as another mixed bag or reassurance that Eminem has just lost it entirely. Where do I stand? Well here’s my thoughts on his 9th studio album Revival.

I think Eminem is a talented rapper. A speedy flow, clever lines, lots of personality, and of course a lot of potential.

But to be very forward, this album is atrocious. I know that we at nappyafro typically do these “track-by-track”, but this writer here feels that such a thing is unnecessary as the majority of this album is more or less than same thing, yet all over the place. It’s an album filled with horrible lines, cringeworthy choruses, white guilt, questionable features, and production that sounds like poorly imitated takes on modern pop/trap rap or “Eminem type beat”.

The best parts of the album are easily the opening track, mostly due to Beyoncé who only gives a chorus. “Offended” is a pretty okay track, mostly due to the production in my opinion, but it’s nothing jaw dropping. “Castle” is also a decent track, but even that is only good in comparison to the majority of the other tracks which are so bad that even on personal and introspective tracks such as “Arose” I can’t help, but feel either bored out of my mind or sick to my stomach.

The opening track we have Eminem tackling the idea that he just isn’t this godly artist that everyone thinks he is, along with his struggle dealing with that perception when the pressure is on him. I think the production is solid, but the track entirely feels bare when you have pretty bare production coupled with Eminem’s voice and typical flow and delivery.

Following that we have the track “Believe”, which has a horrifying chorus coupled with Eminem rapping awkwardly over some hi-hats and delivering lines such as

I blew up on quick, that’s why they call me firecracker

It doesn’t stop there. Next we have the track holding the only guest rapper feature (he only does the chorus) Phresher. On this we have Eminem stepping out of his lane to take on another modern trap flavored beat and giving us lines like

As for “Untouchable”…it’s the thought that counts?

As for our other guest featured tracks…Ed Sheeran sounds decent on the track “River” where Eminem makes love references using Spider-Man and Gwen Stacy, while also handing us more terrible lines such as

Whatever that means, right?

“Like Home” featuring Alicia Keys is an anti-Trump track that sounds entirely unfitting, while “Bad Husband” fearing X Ambassadors has Eminem questioning how he can be a good father, but a bad husband as if it’s rocket science.

Naming out track after track and giving a breakdown of each seems a bit time wasting so I’ll get straight to the point. It’s an album that was never really invited, yet overstays it’s welcome and comes with food that was not for thought. 9 albums in, Eminem sounds as out of touch as ever. It’s as if Eminem took every piece of his career that his fans despised and put it on an album while sprinkling it with new touches we pray to never hear again. I say “we” very loosely. Admittedly, I am not an Eminem fan. I haven’t enjoyed an Eminem album in total since The Eminem Show. I can’t pretend that I was going into this album expecting to enjoy it, because I wasn’t. I heard the singles and I saw the tracklist. But at the same time, I wasn’t going into this fully prepared to hate it, and surely not as much as I turned out to. Though I have my own personal gripes with Eminem’s music, I can acknowledge his strengths and give points where points are due. Unfortunately, I can’t ignore the faults when faults are due. And there are many faults. Too many to save this album with so little points.

On tracks like “Remind Me” and “Heat” we easily get some of the worst and most cringeworthy Eminem lines I’ve ever heard.

“From the bottom to the top, floor to ceiling
You ain’t run of the mill, you’re one in a million
‘Cause real tits are still fun
But everybody knows fake tits are still better than real ones”

“Crystal and slides huns, tonight I’m your pilot
‘Cause you should be up in the sky, girl, you’re so fucking fly
You belong in the mile high club”

“What is a brighter ass if she wants a computer lodged in her vagina?
Said my dick is an apple, she said put it inside her”

“I just bodied the beat, so that hoe must’ve been dug
Cause it just died like ‘ooh, food coloring, duh’
So let’s get turnt, like a shish kebab, twist it Ma
Like an Air Conditioning knob”

“You got puns, I got Aspergers”

“I think you’re divine, so I might swing on you
I’m just kidding girl, I wouldn’t lift a finger or two
Unless it’s the middle finger, to finger you”

The album is terrible. Some tracks are bearable or decent in comparison, but not enough to make this album enjoyable, at least not for me. Personally, I think Eminem has lost his touch which feels like an obvious statement. One that’s been obvious for many many years. I just wish it was more obvious to Eminem. There’s a line in the album where he says “My competition can’t see me, cause I don’t own a mirror”, and I find that to be very telling.

You can skip to the last 10 seconds of the album to hear how I feel about it. (SPOILER ALERT: IT’S THE SOUND OF A TOILET FLUSHING)