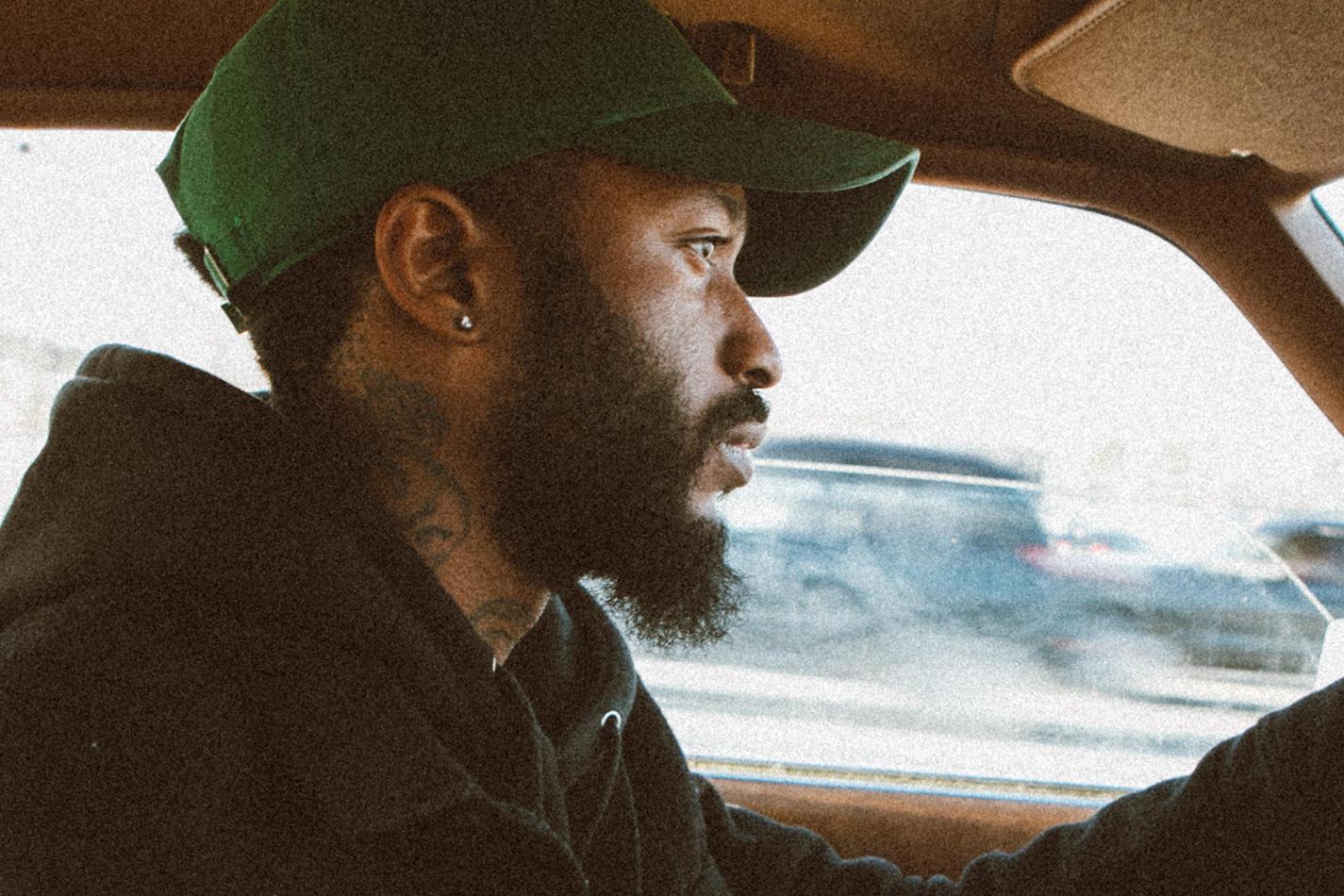 Lute first hit my radar on December 8, 2015 when it was announced that he was officially signed to J. Cole’s Dreamville. This was also the same day that Dreamville released their second compilation album Revenge of the Dreamers II on which Lute made his first appearance on the label with the song “Still Slummin'”. Being the HUGE J. Cole fan that I am, I immediately started digging up information on Dreamville’s newest signee.

Luther “Lute” Nicholson was born in West Charlotte, North Carolina. In 2012, Lute released his first solo mixtape West 1996. He named it this because he is from the west side of Charlotte and he fell in love with Hip-Hop in 1996. When I heard it I was immediately a fan. Lute could rap and he had substance. Then, as time went on and Dreamville started to grow and sign artists like Ari Lennox, J.I.D, and EARTHGANG, it seemed like Lute wasn’t ever going to release his highly anticipated West 1996, Pt. 2. My worry was put at ease when he released “Juggin'” and revealed the release date for the album, September 29, 2017. I waited almost 2 years to hear it and now I have the pleasure of reviewing it. Does it live up to the standard that West 1996 set? Let’s find out…1. Morning Shift
Produced by Save Allen
The song starts off with a voicemail from a man I’m assuming is Lute’s boss telling him to hurry and get to work. In the middle of him talking the beat drops and it’s AMAZING! I couldn’t help but nod my head to it. The song is about the obstacles that he faces when trying to make music, from people saying that they want to see him succeed when they really want to see him fail to being away from his daughter for extended periods of time. Even though he faces these obstacles, he’s not going to let those things hold him back from providing for his daughter and trying to be the best rapper he can be. I love the subject matter of this song. A great way to start the album.

2. Still Slummin’
Produced by J Dilla
The production on this song is very chill. This is a song that I can just sit back and vibe to. Then the hook comes in. Is that J. Cole I hear in the background?! It only makes sense since he’s supposed to “be laying tracks with J. Cole” according to his cousin. Here you can tell Lute’s cousin is someone who really wants to see him do well. He’s encouraging him to put out music because he and the people he plays his music for see how good he is. Brother Pooh is another person encouraging him, telling him to be himself at all times because that’s what makes him different. It’s nice to hear about the people encouraging him to rap after hearing about all the fake people he’s encountered in “Morning Shift”.

3. Home
Featuring Elevator Jay; Produced by Shaggy
The hook on this song makes me want to sing along every time I hear it. It’s so catchy. Lute definitely took Cole’s advice when he told him to “make ‘em feel it.” I definitely feel everything about this record. Here, Lute is talking about his struggles of trying to provide for his family, paying bills, trying not to get fired, and the death toll where he lives. Elevator Jay is the first feature on the album and he delivers a solid verse. Overall a really good song, I just wish Lute had another verse.

4. Ambitions
Produced by Elite & Sean McVerry
Lute is going HARD on this song! It needs to be longer! I love the Cheddar Bob reference.

We either playing ball or land a job
Come to playing ball, my shot off like
Cheddar Bob
And I’d much rather rap or sell drugs than work two to twelve just to miss the number twelve bus cause I overslept
Due to the double I just worked, tryna get this work

5. Git Up
Featuring GQ Slaughter; Produced by Shaggy
…which is my favorite song since “Morning Shift”! I love the trumpet in the background. Lute starts his verse calm but then he switches it up mid way through and sounds way more aggressive. You can definitely tell in his voice that he really wants to be the best he can be and his struggles are what motivates him. He just got fired from his job and he can’t sell drugs because he has a daughter. He’s praying that rap pays off because this is all he has left. That is what is motivating him to make music. This is a song that will get a lot of replays from me just because of how motivating it is. Git Up, Git Out, Git Some!!

6. Juggin’
Produced by Save Allen
This is the first official single off the album and it’s a solid song. The beat isn’t anything to get excited about, but it fits the song perfectly. Here, Lute is rapping about making a better life for himself and the people he loves. Lute explained what “Juggin'” meant on his Instagram:

I really like this song because of how motivating it is. The song and Lute’s quote made me realize that no matter what life puts you through, you have the power within you to fight your way through it.

7. Ford’s Prayer
Featuring & Produced by Cam O’bi
This is a strong contender to be my favorite song on the album. Lute is pouring his heart out on this record. Cam O’bi does a really good job with hook and it really adds emotion to the song. You really feel for Lute here because he’s been working so hard for something and he’s beginning to doubt if what he’s doing is even worth it.

Some days I try to maintain, but I cannot cope
Like fuck the rap game, where my niggas go?
It’s funny how they never show face when your pockets low
But all up in your face when they see just where you tryna go
You see lately I been tryna blow
Cause my daughter need space for all her stuffed animals
I used to have patience, but it’s running low
Lord, if you could, send me a sign or something
‘Cause you ain’t put this in my life for nothin’

8. Crabs in a Barrel
Produced by Save Allen
Picking up where he left off and continues to pour his heart out. There’s no hook, just rapping over a really fire beat. I kinda wish there was another verse on here but oh well, still a really good song.

9. Premonition
Featuring EARTHGANG & Cam O’bi; Produced by Cam O’bi
As soon as the beat dropped I knew this song was going to be amazing! This is the second single off the album and for good reason. I can see this being the song that people gravitate towards the most on the album. Lute is talking to his friends little brother about being in the streets. My favorite line is when Lute asks him what is more important to him, his life or his gold chain that he’s in the streets trying to get. Labelmates EARTHGANG make an appearance on this song with Doctur Dot and Johnny Venus each getting one verse and Cam O’bi handling the simple but fitting hook.

10. Birds & Bees
Produced by Dale P
I could go without this song but I see why it made it on the album. The album is all inspired by his daughter and making a way for her so it makes sense that she makes an appearance at the end of the song in a voicemail.

11. Livin’ Life
Featuring Hi I’m Ry; Produced by Save Allen
A fitting way to end the album. Here, Lute is rapping about taking care of all the people in his life and because of this, he’s put aside rapping. He can’t keep putting it off because he’s running out of time and can’t rely on a Plan B to save him. He wants to rap, so he’s going to pursue it. The song ends with a voicemail from his former manager calling him after he signed with Dreamville and it’s pretty funny.

West 1996, Pt. 2 is the story of Lute’s trials and tribulations before he got signed to Dreamville. This was a solid introduction to a very talented rapper. I can see why J. Cole signed him. He reminds me of Cole in a way because of his hunger to blow up in the rap game and waiting so long and putting in so much work to get to that point. It’s clear that his daughter was his inspiration while making this album. You can see it just by looking at the album cover and you can hear it on most of the songs as he references her often throughout the album.

The whole album showcases Lute’s rapping ability. This kid can really rap and he does it effortlessly on each and every song. His flow is unique and he has a good ear for production. Almost every song made me nod my head to the beat, especially on the best songs (“Morning Shift”, “Home”, “Ford’s Prayer”, “Premonition”, & “Livin’ Life”). Compared to his West 1996 mixtape, this is a definite improvement lyrically and sonically. Being signed to Dreamville and having access to better equipment really allowed West 1996, Pt. 2 to sound a lot more cleaner than its predecessor.

I wish the album was a little longer, as it has a runtime of only 35 minutes. It seems like an appetizer before the main course, kinda like Jay Rock’s 90059 album. This doesn’t hold the album back at all though. I’m sure that when Lute does decide to release a new album, it will be longer and just as good, if not better, than this one. Until then, I will keep this album in heavy rotation. Still Slummin’!!