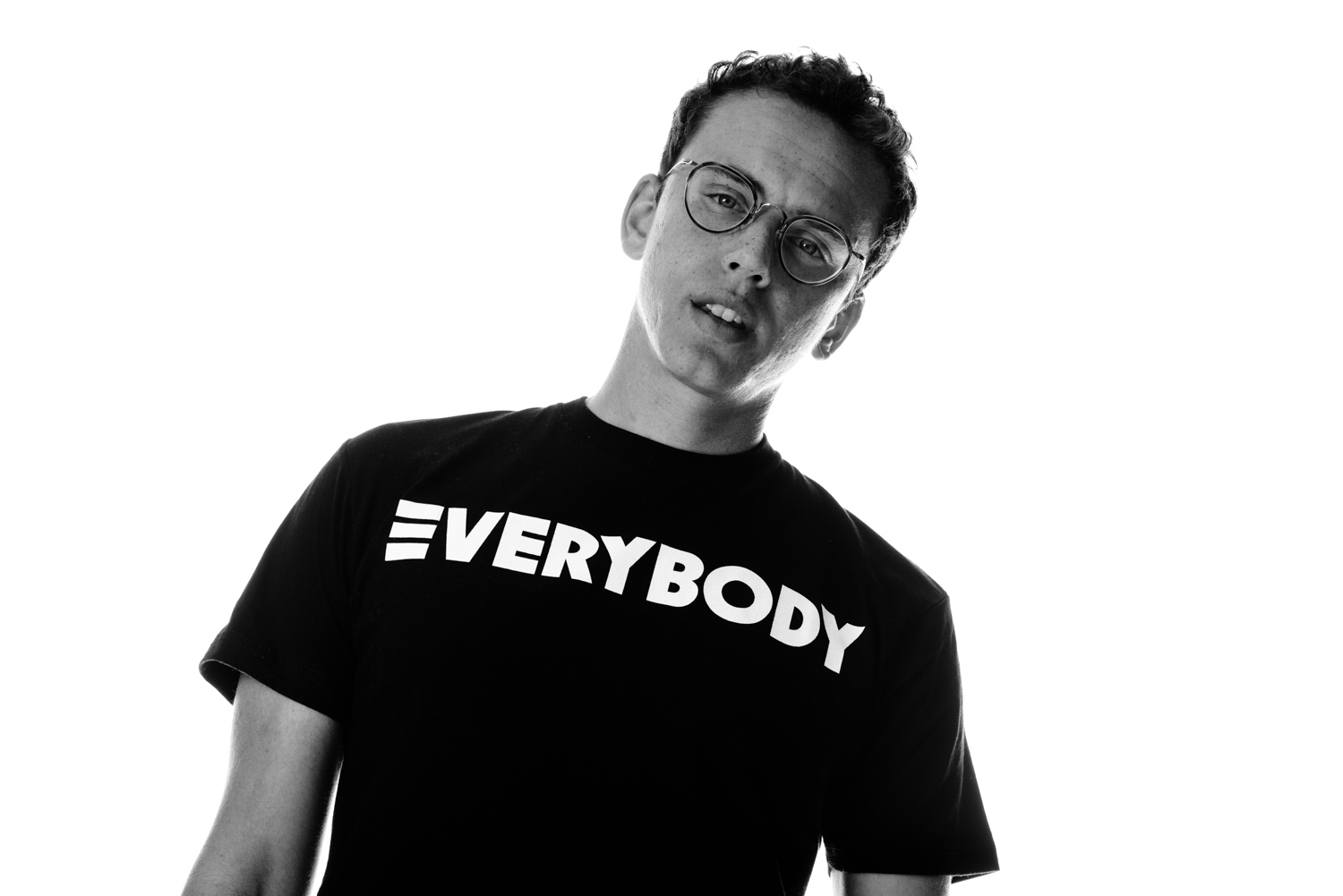 It feels like Logic should have a bigger presence in certain Hip-Hop conversations. But for whatever reason, I don’t hear his name mentioned when talking about the best rappers in the current generation.

Logic makes good music: I really liked his first album Under Pressure and his sophomore album, The Incredible True Story, was cool too.

Logic has fans and can sell records: His previous albums have both went Gold and the album I’m reviewing at this moment, Everybody, is currently the #1 album in the country right in front of Kendrick Lamar and Drake.

Maybe the reason Logic isn’t put in higher regard by Hip-Hop fans is because you can easily see his influences. On his past projects, his music took heavy guidance from artists like J. Cole or Kendrick Lamar. That’s not a bad thing, but it does hurt if Logic wants to put a stamp on a style of his own.

Will Everybody be the album that separates Logic and elevates him to another level in Hip-Hop? Let’s find out.1. Hallelujah
Produced by 6ix & Logic
The album starts off with big uplifting production on “Hallelujah”. I’m talking big strings, layered chorus, breakdowns, and all that. The message is pretty positive as well with Logic preaching openness and praising God. The intro fits with the an album that has a cover inspired by The Wedding at Cana. I can see the track as a whole maybe being a bit too positive for some, but I like it.

The ending of the song features the first skit on the album. The story of the death of a character named  Atom and him meeting God, voiced by Neil deGrasse Tyson (Who makes his first of a few appearances on this album).

2. Everybody
Produced by Logic, 6ix, & PSTMN
This was the first song released off Everybody and encompasses the theme of the album. It’s Logic rapping about his tough upbringing and struggles with being biracial (I guess not his struggle but society’s struggles with him being biracial). I like the production; that beat kinda knocks. I probably should’ve said this earlier, but Logic can rap; he’s one of the better multi-syllable fast rappers out now. That being said, I didn’t like the chorus here, it comes off annoying and kinda corny:

Definitely not a skip but the hook brought the song down.

3. Confess
Featuring Killer Mike; Produced by 6ix & Logic
“Confess” reminds me of earlier Kanye West and that’s a good thing. So far this album has kept consistent with the theme of production. The point of the song is Logic confessing not living right but not letting those actions stop him from changing that and becoming a better person. This is a good song. So far the most complete song yet. Here’s my one issue: How can you get Killer Mike and not have him rap on the song? Don’t get me wrong, Killer Mike’s words at the end of the track are empowering, but it’s Killer Mike; you gotta get a verse from him.

Also, props to Logic for putting his wife on the song. That’s not shade from me, that’s just a nice thing to do.

4. Killing Spree
Featuring Ansel Elgort; Produced by 6ix, Logic, & Vontae Thomas
This track is Logic thoughts on how people experience almost everything through technology and social media. He has some points but “Killing Spree” comes off a little cheesy. That also extends to the Ansel Elgort feature to the hook:

The production isn’t bad but it’s a dip from the previous tracks. Good message, bad delivery.

5. Take It Back
Produced by 6ix & Bobby Campbell
“Take It Back” builds upon the theme and thoughts of the earlier track “Everybody”. Logic once again raps about the struggles of being biracial and facing racism and prejudices from both white and Black people. Logic actually spends most of the track not rapping but talking and telling the story of his upbringing and his thoughts on how everybody is born equal. This part actually may be the most interesting thing on “Take It Back”. He talks about things like being kidnap when he was younger (I want to hear that song) and how his white mother was racist and called him nigger. Like I said, interesting, but I would’ve rather heard it in rhyme form.

6. America
Featuring Black Thought, Chuck D, Big Lenbo, & No I.D.; Produced by Logic, 6ix, & No I.D.
This is easily the most “political” song off the album. It features legends like Black Thought & Chuck D and even a rare verse from producer No I.D. Still, the track probably got more press over Logic’s lines about Kanye West:

George bush don’t care about black people
2017 and Donald trump is the sequel so
Shit, I’ll say what Kanye won’t
Wake the fuck up and give the people what they want

They fit a lot inside the five and half minute song. Everybody gets a verse and Logic even gets to show up multiple times. The production fits with the rhymes of all people involved here. It feels like something that would be played at a rally (or even a riot). If that was the purpose, then they achieved it.7. Ink Blot
Featuring Juicy J; Produced by 6ix & Deats
Logic use of Juicy J is interesting on “Ink Blot”. Juicy J raps from the perspective of a materialistic rapper while Logic raps from the perspective of a conscious rapper (So basically as themselves). It’s actually kinda meta. And surprisingly enough, Logic and Juicy J sound good rhyming back and forth. The beat even sounds like a mesh of a Juicy J beats and Logic’s style. It’s short at under three minutes but its works. Might even be a banger.

8. Mos Definitely
Produced by C-Sick & DJ Khalil
Any self-respecting Hip-Hop head automatically thinks Mos Def when seeing the words “Mos Definitely”. And while Yasiin Bey (Who is a big influence to Logic. Something I didn’t know) doesn’t make an appearance here, you can see his influence on this song (Especially at the end). Logic spits one long verse over a spacey beat and sings at the end. It’s a decent song that preaches fighting to live your dreams to even struggling to pay your student debt. It works.

9. Waiting Room
Produced by Logic
This is a skit that picks up to storyline that started at the end of “Hallelujah”. It’s God (Again played by Neil deGrasse Tyson) explaining the meaning of life and reincarnation to Atom. It’s actually some deep philosophies about creation being explored here. Listen to this one for yourself.

10. 1-800-273-8255
Featuring Alessia Cara & Khalid; Produced by Logic & 6ix
If I had to bet which one song off this album would go on to be a big hit (And probably win a Grammy), it would be “1-800-273-8255”. It has a pop feel, it’s mostly singing, and it deals with a current hot button topic with suicide (The title is phone number to the National Suicide Prevention Lifeline). With that being said, this is not the type of music I would personally listen to. Still, you can’t really hate on a pop song telling people not to kill themselves, so it gets a pass from me. Props to Logic for this one.

11. Anziety
Featuring Lucy Rose; Produced by 6ix, Logic, & Wallis Lane
I guess it makes sense that this is the next song. After dealing with depression, Logic tackles the subject of “Anziety”. You’d think this would be a more hyped song to match the feeling of panic but it’s actually pretty laid back of the most part (Maybe that was the purpose; to mirror an anxiety attack). And just like on “Take It Back”, Logic uses this space to talk (not rap) about his own experiences with anxiety. The song feels off for some reason but again, Logic gets props for tackling an issue that usually don’t get covered in rap songs.

12. Black SpiderMan
Featuring Damian Lemar Hudson; Produced by Logic, 6ix, & DJ Khalil
Logic continues his message of diversity on “Black SpiderMan”, the second single off Everybody. It also fits with the theme of Logic being proud of his race(s):

Besides that, I like the gospel influences here as it gives the song a bigger feel. The eclectic performance of “Black SpiderMan” on Jimmy Kimmel Live as well as the accompanying music video fits. It’s gives off a joyous vibe and I like it.

13. AfricAryaN
Featuring Neil deGrasse Tyson & J. Cole; Produced by 6ix & Logic
Props to Logic for ending with arguably the best song on the album. It’s a lot to take in with the whole track being over twelve minutes long. But here we go:

The actual song is great and like I said, maybe the best song on Everybody. The production rises up a notch as well as Logic’s rapping and singing (I’ve brought up hooks a few times in this review so let me say that “AfricAryaN” easily has the best chorus on the album). The subject matter of Logic’s conflict with him being biracial comes up yet again, but this maybe his best delivery of it (He even re-raps his verses to drive home his point).

You also have two skits on the back half of “AfricAryaN”. One is the ending of the story of God and Atom. The second skit picks up the story of Kai and Thomas that was featured on Logic’s last album The Incredible True Story (It also announces  that Logic’s next album, Ultra 85, will supposedly be his last).

Lastly, the song and album ends with a hidden and uncredited two minute J. Cole verse. This makes sense because you can obviously tell Cole is an influence on Logic’s music. J. Cole is also biracial like Logic too. Cole’s verse sounds like he listened to the album and just recored a verse about his thoughts on his phone, and sent it to Logic (“Nigga, my advice, fuck the black and white shit”). But that’s what doesn’t make sense. Cole’s verse is over different music and the lo-fi quality isn’t the same as the music before. Was he not able to just do a verse for “AfricAryaN” or any other song off the album? Seems weird.

BOTTOM LINE
Everybody is Logic’s best produced album. The tracks are full of soulful instrumentation and lush backdrops. Logic also matches the production with skill and his rhyming is some of his best also. But something feels off.

Logic tackles issues like racism, depression, diversity, and him being biracial. And while these are great issues to have a general and serious discussion about, it’s his take on them that seem boring. Logic’s take on everything is basically “can’t we all just get along?”. This is where rappers who obviously influenced him, J. Cole amd Kendrick Lamar, have an advantage. The way Logic approaches these topics isn’t that nuanced and sometimes he ends up repeating himself on multiple songs. Most of the songs on Everybody are well produced and contain good rapping, the missing thing is the ability to say something different, have a new approach, or even successfully dissect these important issues.

Obviously fans of Logic will love Everybody and have already listened to the project multiple times. But if you are still on the fence about Logic or currently not a fan, this album probably won’t change your mind. It may not be for everybody.