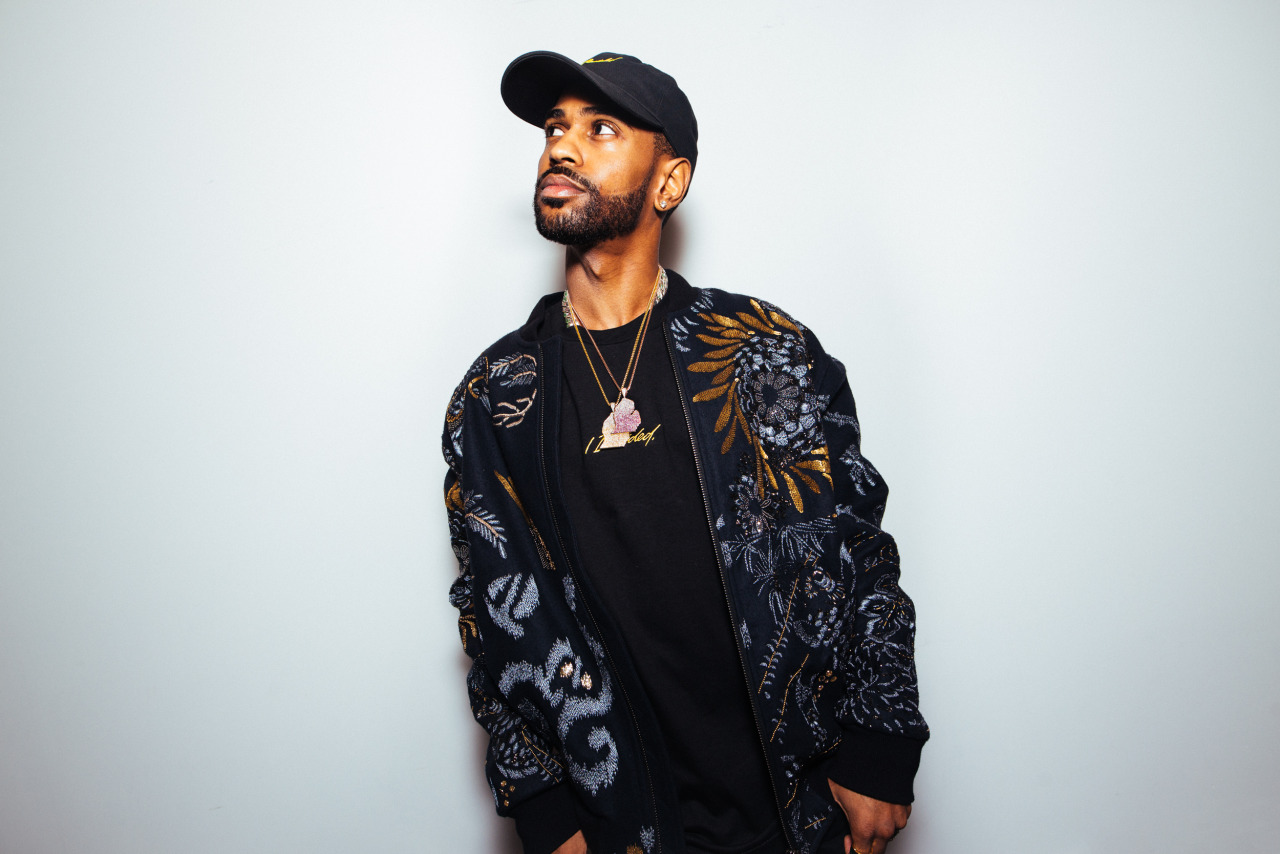 Things are looking good for Big Sean. He’s signed to Kanye West’s G.O.O.D. Music. He recently signed a management deal with Jay Z’s Roc Nation. He has a new shoe deal with Puma. His girlfriend is Jhené Aiko. Oh, and his 4th studio album, I Decided., grabbed the #1 spot on the charts during its initial release.

That’s all well and good, but how does Big Sean latest project actually sound? Does he evolve on I Decided.? Will it continue to raise his status in the rap game? Will we find out exactly what he has decided to do? Let’s find out…

1. Intro
Produced by Amaire Johnson
The album starts out with an older man, who I assume is an older version of Big Sean, walking and talking about the regrets of his life in terms of his dead end job, his family, and the woman that got away. He gets hit by a car and that’s where the album begins. Kinda dry way to start out but let’s see where this goes…

2. Light
Featuring Jeremih; Produced by Amaire Johnson, Big Sean, Gregg Rominiecki, & Maximilian Jaeger
This song samples Eddie Kendricks’ “Intimate Friends” (Which I mostly know from Sweet Sable’s “Old Times’ Sake” off the Above The Rim soundtrack) and I kept waiting for the beat to drop or something and it never came. That left the production feeling a little hollow.

As far as the lyrics, I like Big Sean’s lyrics here as he mentions growing up in Detroit and not having much to inspiring Steph Curry. For the most part his wordplay comes off sounding clever:

So lately I been trying to get what’s inside outside
So many people wanna see my insides outside
I’m from that city four hours east of Southside
Where everyone outside, but don’t fuck with no outsiders

“Light” won’t go down in Hip-Hop history as one of the best album starters, but it does get the ball rolling.

3. Bounce Back
Produced by Hitmaka, Smash David; Metro Boomin, & Amaire Johnson
If nothing else, Sean made a dope comeback anthem with “Bounce Back”; the quintessential song to play after any “fall back and get back” situation.

I’m not gonna say too much about the actually song because if you’re reading this, I’m pretty sure you’ve heard it a few times by now. It’s catchy as hell and made for the charts.

4. No Favors
Featuring Eminem; Produced by WondaGurl; Big Sean, & FrancisGotHeat
The thought of Big Sean and Eminem being on a song together makes sense in theory. They both are famous rappers from Detroit and it worked before when both appeared on “Detroit Vs. Everybody”. The pairing of Sean and Slim Shady however doesn’t work on “No Favors”. The first part goes okay with Sean rapping over the subdued piano lead production. Things go off the rails when Eminem tries his hardest to go lyrical miracle with his verse. The verse goes too long, it’s too aggressive, it has no focus, and it just doesn’t fit. The whole thing just comes off as awkward.

5. Jump Out the Window
Produced by Key Wane & Hey DJ
Sean brings out the sing-songy flow on “Jump Out the Window” (and he’s backed by an uncredited Jeremih). But it makes since because he’s talking to a woman friend and trying to convince her to leave her abusive boyfriend and be with him instead. The subject matter isn’t nothing groundbreaking and even a little corny on some parts (“Remember when you used to come through and hit the Mario Kart and you always picked the princess”), but it’s easy on the ears and so smooth you won’t mind it at all.

6. Moves
Produced by Fuse, Tre Pounds, & Amaire Johnson
This was aimed for the dance floor or maybe even the next twerk compilation you’ll watch on Worldstar. Sean is pretty good at this kinda of song. In fact “Moves” remind me of a subdued version of “Dance (A$$)”. It’s weird that the lyrics go from titties moving to threatening you if you mess with Sean’s family, but you won’t really care when this comes on in the strip club.

7. Same Time Pt. 1
Featuring Twenty88; Produced by Amaire Johnson
Things get a little sexual as Big Sean & Jhené Aiko reunite once again as Twenty88. Fun fact: Jhené has been on the last three Big Sean studio albums but this is the first one since they have went public with their relationship. It’s only a minute and a half but if you like Twenty88’s last project, you’ll like this (I’m sure a Pt. 2 will on a future Twenty88 album).

8. Owe Me
Produced by DJ Mustard; Amaire Johnson, & Travis Scott
First off, I’m very relieved that this isn’t a remake of the 1999 Nas song (Although, I can see one in my head with Sean rapping Nas’ verses and Chris Brown doing his best Ginuwine impression. *shudders*). The actual song is better. Big Sean talks about a woman who did him wrong in the past but now she’s trying to come back and he’s thinking about it. The idea is executed okay but on some parts Sean sound disinterested with doing the song all together. Maybe that was the point but it comes off kinda annoying.

I’m surprised that this track has production from DJ Mustard and Travis Scott. It doesn’t really sound like it’s from neither and not a “MUSTARD ON THE BEST!!!” or “STRAIGHT UP!!!” drop appears at all. Weird.

9. Halfway Off the Balcony
Produced by Amaire Johnson & Maximilian Jaeger
One argument I’ve heard about Big Sean is that he sounds like Drake. Not Drake right not but Drake a few albums ago. “Halfway Off the Balcony” is a good example of this point. From the production, to the intro, to the existential emo shit; it’s all here. That’s not to say that the song isn’t good. It just doesn’t show off Sean doing his own thing. Oh, and the title doesn’t suggest suicide thoughts as I once thought. The song deals with the stress of being a popular rapper and the stuff that comes with. I’m actually not sure why it’s called “Halfway Off the Balcony” unless it meaning that he always goes out to get air or something to get away from it all if only for a second. *shrugs*

10. Voices in My Head/Stick to the Plan
Produced by DJ Dahi, Metro Boomin, DJ Khalil, & Amaire Johnson
I’m pretty sure DJ Dahi produced the first half of this song (“Voices in My Head”) and Metro Boomin produced the second half “Stick to the Plan”. Maybe they were just two songs smooshed together but it works. The first part is slow and light and features lyrics about regrets of past mistakes (Complete with ad libs like “You know better, what the fuck!?”). The second part is the bass heavier of the two and reconfirming lyrics about staying focus and sticking to the plans. It’s motivational rap music and it’s executed well.

11. Sunday Morning Jetpack
Featuring The-Dream; Produced by Amaire Johnson & Cary Singer
The title “Sunday Morning Jetpack” may sound like something left off of Kanye West’s Life of Pablo (The-Dream feature doesn’t help), but the actual song delivers. Over mellow string-heavy production, Sean raps one long verse talking to his deceased grandmother and reminiscing about his childhood. This could have come off corny but it’s actually a touching tribute.

12. Inspire Me
Produced by Detail, The Track Burnaz, Sidney Swift, & Amaire Johnson
Sean pays tribute to his mother on “Inspire me”. It’s basically his version of “Dear Mama” without the drug abuse. That all well and good, but I’m surprised that this song comes right after “Sunday Morning Jetpack”. Besides that, it’s okay. If you’ve heard a rapper pay tribute to his mother with a song, this will all sound familiar. Unlike the previous track, this does at times come of corny, but you can’t hate on a son being inspired by their mother.

13. Sacrifices
Featuring Migos; Produced by Metro Boomin & Allen Ritter
You remember “Notorious Thugs”? When Biggie did a song with Bone Thugs and adapted to their style? That doesn’t happen here. I mean, it sometimes feels like Sean tries to do the Migos’ style, but it doesn’t work well. It could be even said that Migos out shined Big Sean here (Although not technically because Takeoff doesn’t make an appearance). I don’t like the song that much so it doesn’t really matter. I will give it points for meta reasons: Before I Decided. took the #1 spot on the Billboard 200, the spot was held by Migos’ Culture. I guess that’s cool.

14. Bigger Than Me
Featuring Flint Chozen Choir & Starrah; Produced by RobGotBeats & Amaire Johnson
Sean puts on for his city on the last track of the album and even brings in Detroit’s own Flint Chozen Choir. The song is culmination of the album’s theme: Understanding that it’s about more than you and giving back to your family and city (“All I wanna do is make the city proud”). Over a gospel backdrop, it’s a nice message and song to end the album with.

I Decided. is easily Big Sean’s best album. It’s more focus, it’s more mature, and maybe even better produced than any project he’s put out before. It presents the best version of Sean we’ve gotten so far.

The only problem with is that I Decided. won’t push Sean in contention with the top guys leading Hip-Hop’s current generation (Drake, J. Cole, & Kendrick Lamar). I’m not sure if he’ll ever be on that level. Sean won’t ever make big records that rival Drake’s because, like I mentioned earlier, he makes songs that Drake has already made, he’ll probably never be as “deep” as Cole, and he’ll never be as lyrically proficient as K.Dot.

But there’s nothing wrong with just being Big Sean. With songs like “Bounce Back” or “Moves”, he has shown that he has a knack for making radio records that people like. If the main purpose for I Decided. was to make his mother, city, and fans proud, that mission was accomplished. It’s a win for Detroit.