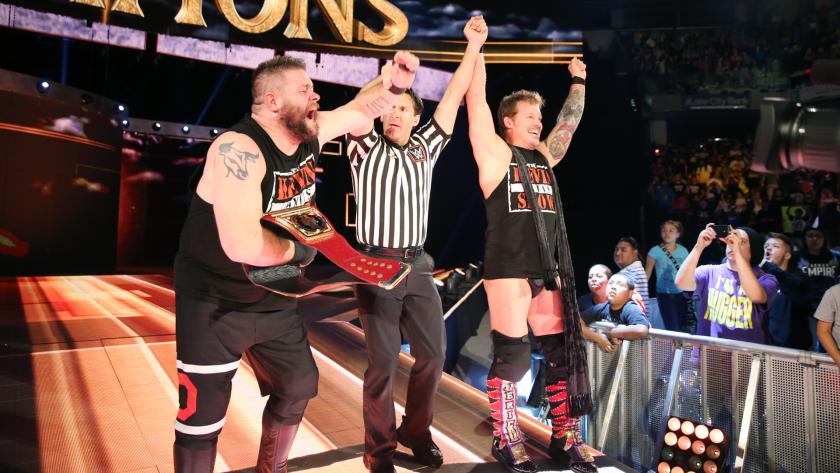 Of course I start back doing PPV Recaps when it’s literally an event every two weeks. But I feel good about doing this one. There were literally no bad matches tonight on Clash of Champions. I enjoyed every one so why not ramble on about it right? I got shit else to do.

Oh yeah. Be sure to check out The FRO Horsemen Podcast (AKA The Blackest Wrestling Podcast on the Planet). It’s basically back to weekly now and where else are you gonna hear yours truly and GQ-Blu talk about wrestling and bullshit.

Also, if you want to watch wrestling along with us via Twitter during Raw, SmackDown, or WWE PPV’s use the hashtag #FROHorsemen. Or not. Whatever. Let’s go.

The pre-show match was Nia Jax versus Alicia Fox so it was a given that Nia would win. The match made me remember how athletic Alicia Fox is. In the end, my baby mama Nia Jax won with a Samoan Drop (I guess that’s her finisher now)

Cesaro and Sheamus Beat The Shit Out Of Each Other:

Let me repeat that for you: Cesaro and Sheamus beat the shit out of each other. And that they did. After seeing these guys wrestle 6 matches, I was surprised at how much I liked this match. It was so brutal that I thought both wrestlers were legit injured after the match. Hell, I still don’t know. Cesaro went for a suicide dive and fell on his head:

Th ending was kinda suspect. A no contest for the finale of a Best of 7 series? Do they do it again on Raw tomorrow? And why won’t anybody be specific on the what title the winner will get a shot at?

Who said Roman Reigns was in the doghouse after failing WWE’s wellness policy? When you think about, him going over on Rusev was the only outcome. Both wrestlers seem to have good matches together and this was another one so I guess that’s all that matters. Let me say this: Even though Rusev lost, NEVER FORGET that he came out in a tank at Wrestlemania 31. NEVER!!!

The Women Put In Some Work:

Charlotte, Sasha Banks, and Bayley may have had Match of the Night. And I ain’t mad at Charlotte retaining the title either. I would’ve given it to her off this beautiful moonsault alone:

Also: Am I the only one who is starting to fuck with Dana Brooke? Oh, it’s just me? Okay.

This was a good but kinda weird too. Of course it was a good match, we all know Seth Rollins and Kevin Owens are talented wrestlers and it really showed in the main event. The weird part (for me at least) is that I don’t think I’m use to Seth being a face yet. I know the WWE had to speed somethings up because of Finn Balor’s injury, but I still see Seth as the guy who will knee a baby in the face for the title and is backed by The Authority afterwards.

I didn’t expect Jericho to interfere in the match (While wearing a Kevin Owens shirt no less). Like most people I expected Triple H to interfere again but he was once again a no-show. My guess is that he’s attending underground wrestling matches looking for the best cruiserweights around the world since he was last seen at the CWC finale.

Stephanie McMahon may have screwed Seth too. I guess because she took too long to send in a replacement referee and because she sorta smiled when he lost. *shrugs*

I’m surprised The New Day retained against Luke Gallows & Karl Anderson. They cheated to win but The Club made a good showing (Wait, are we still calling them The Club?).

T.J. Perkins also retained against The Brian Kendrick but it makes sense seeing that it was the first time the WWE Cruiserweight Championship was defended (At least this iteration). Kendrick sucker headbutted Perkins after the match so the cruiserweight division now has a storyline.

Chris Jericho beat Sami Zayn. I guess it’s only right with Jericho’s involvement in the main event later in the show. Now that I think about it, Jericho has been quietly getting big wins. He beat AJ Styles at Wrestlemania, he pinned Enzo at SummerSlam, and now this. The gift of Jericho just keeps on giving. Soak it in maaaaaaaannnnn.

This doesn’t really have anything to do with the show, but that WWE 2K17 commercial shown during Clash of Champions was dope.

See you in *sigh* two weeks at SmackDown’s No Mercy.