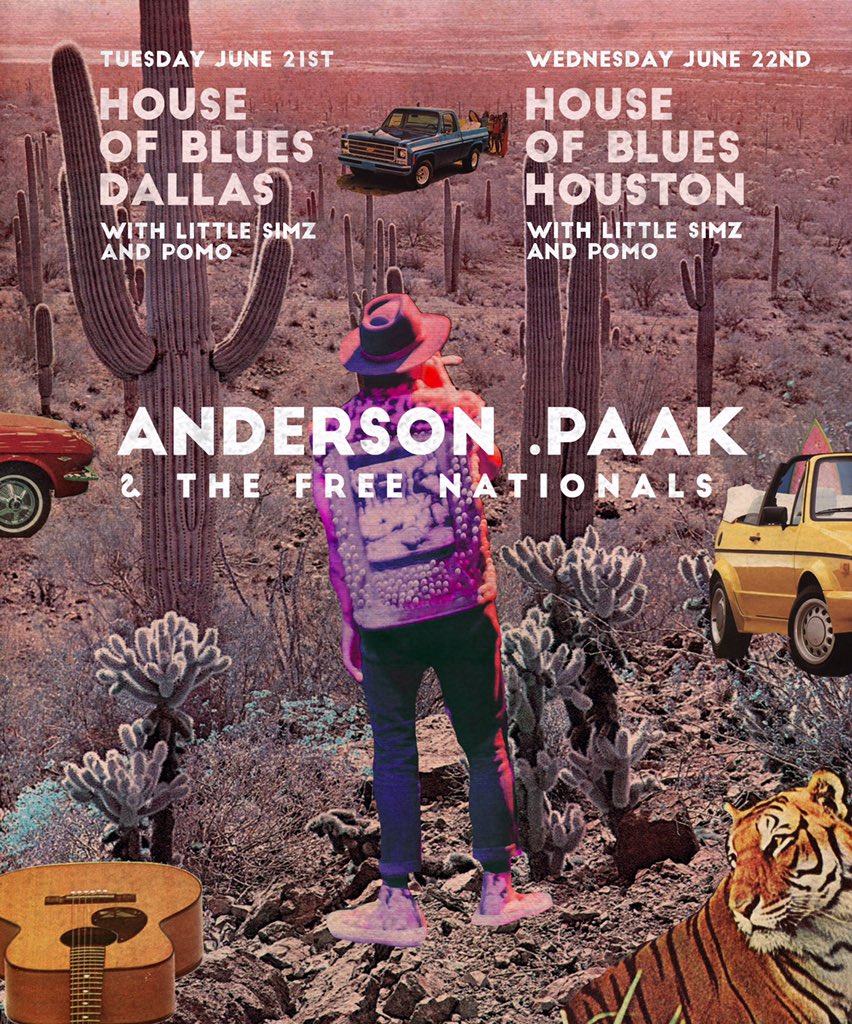 Let me start this review with some apologies to the opening acts of the Malibu Tour. Pomo, your mixes are great and need to be on Soulection Radio and Little Simz, I will probably fall in love with you as you will replace the hole in my heart Ms. Dynamite left years ago, but when I walked into the House Of Blues in Dallas Tuesday night, I was ready to see Anderson. Paak. The “SUPER” diverse crowd of various races, ages, & personalities kept the people watcher side of me entertained. S/O to the two guys wearing LeBron James Cleveland Cavaliers jerseys I assumed they just bought. Note to self: Anderson .Paak crowd in Dallas enjoys A$AP Rocky. I hope DJ/Producer Callum Connor made a note himself. Honestly, I would love to hear a collaboration from the two of them. Two hours later, the man of the evening was rocking an USA Olympics Hockey jersey, gold chain, and shades took the stage with his band, The Free Nationals, with energy and showmanship that never left for a second in that 90 minute/18 song set.

I’ll admit this review is kind of bias; In the past year I’ve become a huge fan of the artist formerly known as Breezy Lovejoy. In an era where R&B singers are boring because they lack personality is and the music is redundant with songs about (good or bad) relationships and “da club”, it’s refreshing to hear someone sing about their older sister still claiming them on their taxes like he does on “The Waters”. It’s part of the reason why I wanted my oldest sister to watch who I think will be R&B’s biggest stars. Back story of my sister: While she is the one that introduced me to Mystikal and No Limit, she is definitely the R&B head in our trio of siblings. My oldest sister and I have never been to a concert together. 26 years and there has never been a right time or performer for us to link up and watch someone perform on a stage. It’s her that made me think of this year’s XXL Freshmen list that picked Anderson as one of its choices.

As we were leaving with ringing ears and I was recovering from a sore throat of screaming “YES, LORD!”, I asked her for her review. She enjoyed it and said he’s a great performer and has a lot of energy needed to be a rapper and a singer. I was taken back for a second, because I have heard/seen Paak labeled a rapper, but I wouldn’t place him on a list of my rappers today, but XXL magazine did this year. I feel like I’ve written this before and I still feel this way: Hip-Hop is influencing every genre, but that doesn’t mean there should be singers on The Freshmen list. Yes, Drake, B.o.B, and many other rappers post 808’s & Heartbreaks mix singing and rapping in their projects, but they got BARS with no melodies sprinkled in and the song is still enjoyable. Maybe it’s just me and my old man purist mentality of when I want to hear R&B singers I want to hear “sanging”, not singing, but SANGING!

After talking to the audience and warning the guys that they should let the ladies have the front row spots in the standing room only venue because of his consistent pelvic thrusts throughout the show, he controlled the audience. My strategy for going to concerts is never listen to the artists’ music beforehand, go in like I’ve never heard of them. Complete opposite from the rest of the crowd as not only could I hear lyrics delivered from the speakers, also from next to me from a girl that stared in the face of her boyfriend more than she faced the stage. Her back was turned to the man she came to see, but she knew all the words to “Without You” and “Come Down” and placed them in the face of her date. There are times when I wished Anderson .Paak would stand in the middle of the stage and deliver a ballad more, but he’s not that type of performer and I hope that he doesn’t change as a performer in the future. Every song was on point.

Every time he went behind the drums to play was more amazing than the last time. The camaraderie and interaction between Dr.Dre’s protege and The Free Nationals inspired good vibes throughout the building. Songs I’ve heard before and wouldn’t request like “Glowed Up” & “Heart Don’t Stand A Chance” became anthems of the moment. My personal favorite “Silicon Valley” was performed to my surprise, but the moment of the night is when “Suede” began and the entire floor seemed to shake as everybody lost their minds and knew when every “Yes, lord” ad-lib was coming. I hate to spoil the ending, but this was the moment I was waiting for since I saw one of first televised performances. After chants of an encore, the man and his band returned to deliver Malibu opener, “The Bird” (That was my ballad moment) and my wish was granted as “Am I Wrong” with him him behind the drums again transitioned into David Bowie’s “Let’s Dance”. AAAAHHHHH!!!!!!!! Drumsticks thrown into the crowd, a bow, kisses blown to the crowd, and like that he was gone.

I’m happy to learn that I found a performer I hope to see in concert after every new project and I think he’ll be back to D-Town.

Dallas it was so good to be back, I felt the love in there heavy!!!!