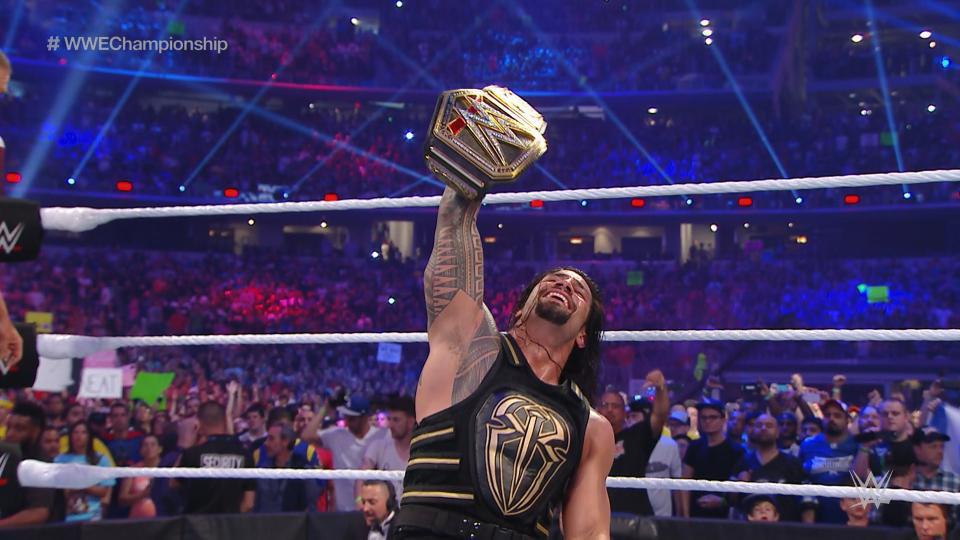 You could almost say that the WWE’s back was against the wall going into WrestleMania 32. They had to fill up 100,000+ seats at AT&T Stadium while dealing with a rash of injuries to some of it’s top stars. It also had a main event that many of its fans didn’t want to see in the form of Triple H versus Roman Reigns.

Now that Sunday is over and WrestleMania 32 is in the books, can we say that Vince McMahon and company overcame those odds? Answer: I don’t really know. I may need more time to think about that. I guess. They did set at new WWE attendance record with a 101,763 fans present so that’s something.

What I do know for sure is that one of WWE’s plans to win over the fans was to provide them with a plethora of surprises and appearances to keep everybody on their toes. What am I talking about? Where I’m glad you asked. Let’s see:

– During the pre-show, with the help of Lita, WWE unveiled the new WWE Women’s Championship. They’re even doing away with the term “Diva” and will start calling women wrestlers superstars. Finally.

– They let Zack Ryder win the Intercontinental title in the opening match: Even though WWE hinted at this a little, I’m still shocked that they actually put the IC belt on Ryder.

– The New Day came out in a giant box of Booty-O’s dressed like Dragonball Z characters.

– Stone Cold Steve Austin, Shawn Michaels, & Mick Foley came out to beat up The League of Nations: I didn’t think Stone Cold had anymore stunners left in him. He at least had three.

– Shane McMahon jumps off the top of the Hell in the Cell: Of course he did. And in custom made Jordans no less. Also, besides this GIF of Lana smacking her booty (Hi Lana!), Shane almost killing himself and crashing through a table is of course the GIF of the night:

Vince sacrificed his son for #WrestleMania I hope y’all appreciate it. #FROHorsemen

– Shaquille O’Neal come out and participated in the Andre the Giant Memorial Battle Royal. DDP and Tatanka were also surprise entrants and there no Cesaro appearance as hoped, but nobody really noticed because SHAQUILLE O’NEAL WAS IN A WRESTLING MATCH!

– The Rock actually wrestled. The match was only six seconds and he buried The Wyatt Family (Specifically Eric Rowan), but he wrestled and even had on his ring gear.

– John Cena made an appearance and helped The Rock fight off The Wyatts Family: JBL made sure to mention that he was nowhere near returning full time though.

Now let’s talk about the main event. Roman Reigns beat Triple H and finally held the WWE World Heavyweight Championship at the end of WrestleMania like we all knew he eventually would. I think most people thought it would be more, especially when remembering the audible that was called in last year’s WrestleMania main event. But no. Roman stayed face and beat Triple H clean. He even speared Stephanie McMahon (By accident, but still).

The actual match was okay. It definitely wasn’t a classic but it wasn’t terrible either. The boos weren’t as bad as I thought they would be, but that may be because the stadium was so big and the sound didn’t travel as well (I wonder how it translated in the actual stadium). If nothing, we’re past the whole thing about the WWE trying to make Roman the new face of the company. They got their moment and now we hopefully can move on.

The Usos defeated The Dudley Boyz