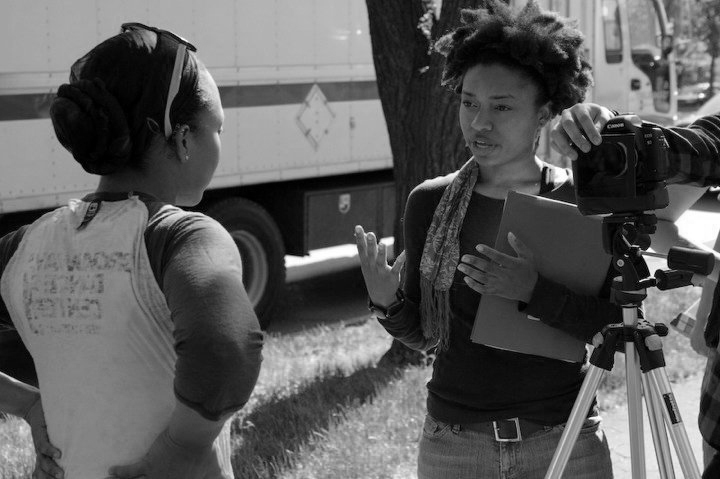 Past WMAS Podcast guest, Nijla Mu’min, sent me a link to her latest article on VICE about being a Black woman filmmaker in the midst of #OscarsSoWhite and being a student of the industry for years taking notes of how to/how not to produce a project.

Over the last few weeks, I’ve seen blog after blog about the #OscarSoWhite debate. It’s become a trending topic, seemingly divorced from the protest origins of its founder, April Reign. Every day a new headline pops up about what some white filmmaker, actress, or celebrity said about the lack of “diversity” across the industry. The answers range from genuine concern or misguided solidarity to outright disregard. In Julie Delpy’s comments about the flack that women get in Hollywood, which she claimed was worse than what African-Americans receive, she forgot that women could also be African-American, while Joel and Ethan Coen seemed not to understand why people of color should be in movies in the first place. Somehow, this is supposed to mean something; something is supposed to change. In response to the backlash, the Academy has enacted measures to increase the number of women and people of color members by 2020. But it’s 2016.

We forget that at the center of these large, online debates are actual people like me—black women, Latina women, Asian women—who are struggling, striving, and making movies. For us, it’s not about Oscars—it’s about getting funding for our next film. It’s about finding a way to survive while pursuing our film careers. In 2013, after graduating from CalArts with a dual MFA degree in film directing and creative writing, I had the chance to report on the LA premiere of Ryan Coogler‘s film, Fruitvale Station, at the Los Angeles Film Festival. I’d known the Creed director since I was ten years old, when we met at a summer camp at Mosswood Park in Oakland. We’d maintained a friendship throughout high school and college, and I felt, because of our shared history, a personal connection to his film. As I stood on the red carpet with my audio recorder, I was filled with a mixture of hope and anticipation. I knew that his was the beginning of a promising career, but as I reflect on his rise into mainstream recognition, I wonder if this could also happen for a young black woman, or a woman of color.

I highly recommend everybody read the rest of the article on VICE.

Riding off the success of her short film, Dream, Ms.Mu’min is campaigning to fund her 1st feature film, Jinn. Described as a narrative film about identity, Islam, and first love. She advantageously explains  why her and her crew need our help of reaching their goal by the first of April.

We know this journey won’t be easy. Some would say that a film like this is too niche, has too small of an audience, or isn’t mainstream enough and we are going to prove them wrong. At its core, this is a universal film about identity, love, and family relationships. With your help, we can prove that a story like this is financially viable and necessary.

Jinn is a micro-budget feature that will be shot in Los Angeles this summer. Your contributions will ensure that this movie gets made. Funds raised will be used for casting, permits, locations, wardrobe, production design, and crew and cast fees.