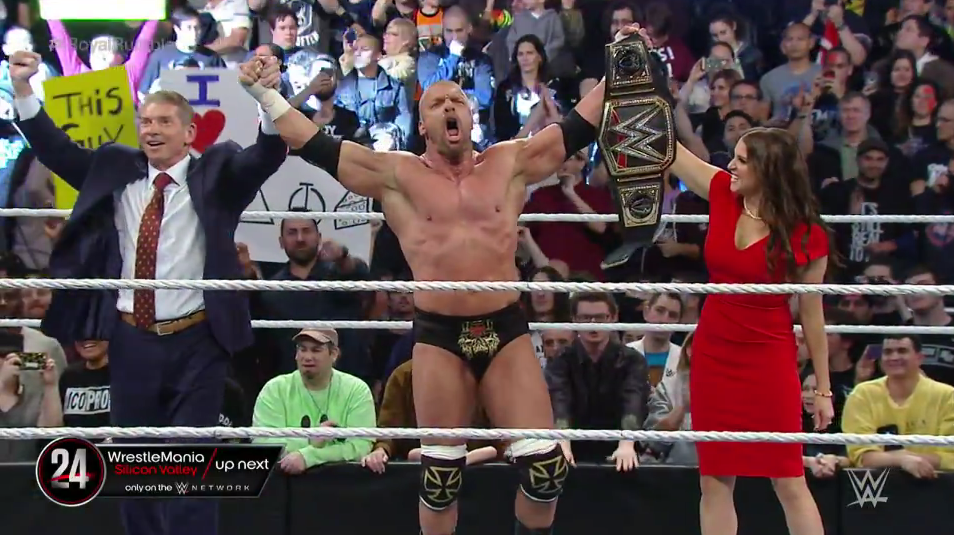 Like many people, the Royal Rumble is probably my favorite out of all the WWE pay-per-views events with the actual Royal Rumble match being the centerpiece. WWE has calls it their version of an all-star game, but that’s not really true. Yeah, it has at least 30 wrestlers involved, but something is actually on the line (I know that’s funny to say when talking about pro wrestling but whatever). Most of the time it’s a chance to challenge for the main title at Wrestlemania. This year the WWE World Heavyweight Champion, Roman Reigns, is defending the title in the match.

There were five other matches on the card counting the pre-show but I’m only gonna cover the actual Royal Rumble match here (With the full results of the card at the bottom of the post). It was a lot to take in so let’s break this down:

You already read the title of this post. Triple H was a surprise entrant at #30, wrestled for the first time since last year’s Wrestlemania, and won the title. On one hand I’m surprised, but on the other hand, we’ve been hearing rumors about Roman versus Triple H at this year’s Mania for a while. Also, if I’m not mistaken, this is Trips 14th title reign.

Speaking of Roman Reigns. Once again and just like last year’s Royal Rumble event, the crowd was not behind him. That wouldn’t be so terrible if the whole event wasn’t planned around him. Also, he got eliminated by Triple H and surprisingly that was not the final elimination. The final two wrestlers were Trips and Dean Ambrose. What the hell does that mean?

AJ Styles finally made his long awaited and long rumored appearance in the WWE (Much to the dismay of Dixie Carter). A few things came to mind when I saw him come out at #3: I’m really happy he finally got to make it to the WWE. And damn he looks small compared to the WWE wrestlers. He made a good showing by staying in the match for roughly 28 minutes, but now we wait for his first feud. Will it be with Kevin Owens aka the guy who eliminated him after saying “Welcome to the WWE”?

You might can pencil in The Wyatt Family versus Brock Lesnar at this year’s Wrestlemania. It’s clear that one of the reasons they have been book so strong lately was to look worthy against Brock. Plus they all eliminated him in the Royal Rumble. Will it be Bray versus Brock or a handicap match? Or will all of this be finished at Fast Lane?

Sami Zayn was also in the Royal Rumble and he only eliminated one person: His arch rival Kevin Owens. Is he finally on the main roster? Probably not; He still has work to do in NXT.

GIF of the Night: Kevin Owens going through some tables.