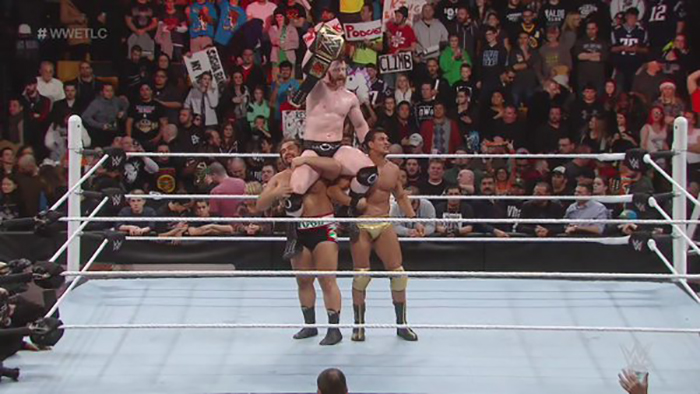 On Sunday WWE held their annual TLC: Tables, Ladders and Chairs pay-per-view. As a wrestling fan, I’ll admit that sometimes even though your not excited about certain shows, you almost watch out of routine. TLC: Tables, Ladders and Chairs is one of those occasions. The buzz for TLC wasn’t great as with most of the WWE product these days. But hey, sometimes when we under estimate the WWE, they over deliver. Did that happen this Sunday.

Sorta. It wasn’t the worst show ever but there were definitely some dead spots. Thankfully there were some bright spots too like the opening triple threat ladder match for WWE Tag Titles. It was a fun match that included Xavier Woods throwing a trombone to help win the match and Kalisto hitting a massive Salida del Sol from the top of a ladder. Speaking of which, here’s the GIF of the night:

The main event TLC match between Roman Reigns and Sheamus probably won’t get match of the year honors, but damn did they beat the shit out of each other and put their bodies on the line. And while Roman Reigns lost in end (Thanks to the League of Nations helping Sheamus), it did further his character.

After the match, a frustrated Roman started beating up Sheamus, Rusev, and Alberto Del Rio. The Authority came out to stop this and Roman took out his rage on Triple H. And after putting Trips through a table and hitting a Spear for good measure, Roman stood tall with the crowd chanting “Thank you Roman!”. Seeing as how hard the WWE has been working at getting Roman over with the audience, I’m sure they loved hearing that.