My Life At The Movies 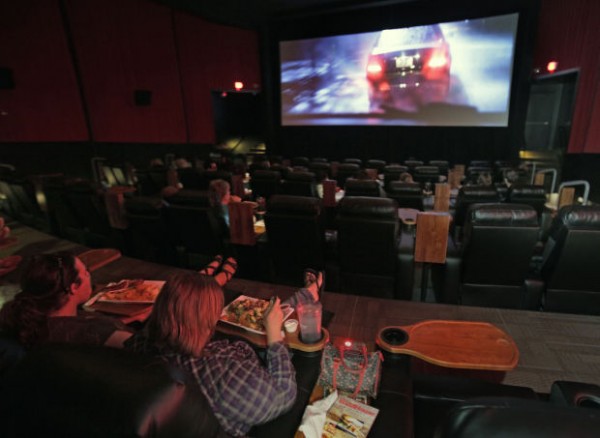 It was during my last date that I really grasped the change in the movie theater experience. While my date was enjoying No Escape at Studio Movie Grill, I missed at least five minutes of the film because of a conversation between the waiter and I over whether or not he had already charged our meal to my card. Before we witnessed the conclusion of whether or not Owen Wilson could save his family from a revolution in Southeast Asia, I remembered my first movie date. Tenth grade Short-T took his then girlfriend to a Saturday showing of ATL at the local theater in Shreveport, Louisiana that would later employ him a year later. The process was simple back then: Agree on what movie to see, pick the day/time, buy the tickets at the box office, walk through the lobby, ask if she wants something to eat, walk in theater/pick the middle seats of a back row, watch movie, make out during the end credits before the ushers walk in, and then go home. It was as simple as that. As I got older and started driving my own car, eating before or after the movie came into play. The routine of a simple movie date has changed immensely as I’ve moved to an area with more theaters that imply more attractions to gain an audience.

Fast forward from 2007 to present time where I planned an outing with a friend that included dinner and seeing Black Swan at the Texas Theatre. Some people would wonder why would I go see a five year old movie that I already saw when it was first released. Well, this time the Dallas Neo-Classical Ballet performed before the movie. The psychological thriller about a ballet dancer obsessed with getting the lead role in a production had a better opening act than the previews that may or not be related to the genre of the feature presentation. I can’t be the only one that finds it weird when I’m about to watch an action movie and a trailer for the latest Nicholas Sparks film starring Rachel McAdams starts. This year was my first time visiting my local Alamo Drafthouse. I was impressed by its atmosphere featuring classic film posters on the hallway’s walls, but it was inside the theater where I found the most welcoming comfort.

Instead of the wack behind the scenes commercials for upcoming TV shows, Drafthouse showcases YouTube clips, niche trailers of obscure/outrageous films, and music videos before our feature presentation. I admire and appreciate venues like these that add more to the experience than just sitting in a dark room for more than an hour. Whether it was watching the old “This is your brain on drugs” commercials and Wiz Khalifa smoking with a Teenage Mutant Ninja Turtle on SKEE TV before American Ultra starring Jessie Eisenberg and Kristin Stewart as CIA Agents/potheads or NWA music/home videos and the Brian Williams rendition of Straight Outta Compton before the biopic, I commend the Drafthouse on getting the theater in the right viewing mood for any movie of every genre. The only thing taking me out of the movie in one of their theaters that is adamant about their “No Texting/No Talking” policy is the waiters walking back and forth.

I understand the appeal of having someone wait on you while you’re watching a movie. No one wants to get up and leave while they’re in the middle of a story being told. All the food and drinks brought to you at a notice is a convenience, but for me it’s mostly a nuisance. The only showing of Focus at my local AMC theater was in one of their Cinema Suites. The recliners were cool, but it was not worth the the extra $3 attached to my my regular theater price and the sounds of the plates and utensils being collected was distracting. Also, my burger was disappointing, not as spicy as I anticipated or as they advertised, but it wasn’t as awful as what I tried to consume while watching Entourage this summer. (This and the dry chicken wrap from Drafthouse has had me cause of movie theater food ever since. People too good for nachos now!? What A Time! To Be Alive!)

My Instagram post was probably one of many complaints they had as they have changed the entire menu and offer more selections. I can’t be the only one that has ever wanted to eat sushi in a movie theater. Come on, be honest. The food options are great, but do not make me want to go to their theater more. When I working at the movie theater as an usher, I was pissed when I found empty vodka bottles while cleaning after screenings of Sex and The City filled with women in large groups with their friends. Years later, my best friend and I snuck our daiquiris into a packed theater of twenty somethings and watched Project X. Now that I’m going to movie theaters that have bars in the lobbies, I’m sometimes fortunate enough to chat with someone with similar interests in film. Shared reactions and energy make small moments special. 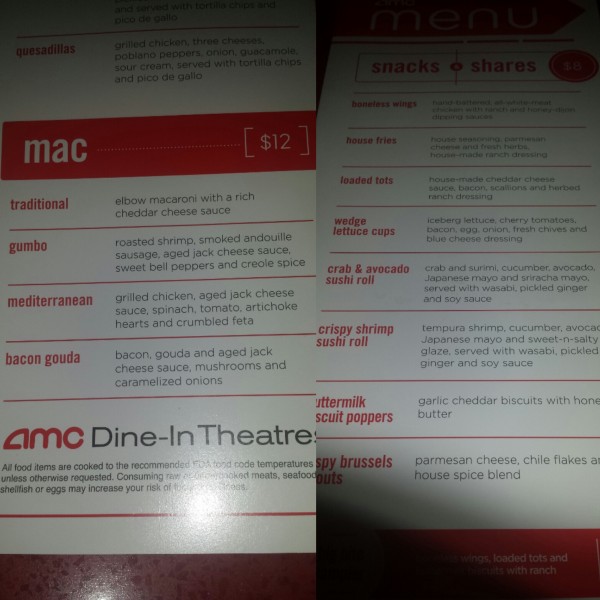 Streaming/On-Demand choices have made movie theaters more creative in their attempts to sell tickets. Several films this year have had a theatrical release sharing the day with their On-Demand releases. Potential patrons find it easier to stay at home and enjoy the comfort of their own recliner for free or $4.99 depending on their On-Demand choices. I’m not even going to start talking about all the unknown, undiscovered movies on Netflix and Hulu. Ironically, ticket sales are actually up, but it is because some people are not taking advantage of the $1 options offered by dollar theaters and Red Box. According to BoxOfficeMojo, the yearly box office results are at an all time high currently in 2015 compared to the last five years even with a nationwide average of $8.61. (SN:I want to know where and what time in America is the average of a movie ticket start with $8. If it’s after 7PM in the Dallas area, you looking at $9 or higher for a basic ticket unless you are going to a theater with dining.) We have Hollywood to thank for that achievement at the box office.

Major studios are also gasping for air by only offering remakes and sequels to well known projects of the past with built in audiences that will return a profit. The continuous box office records smashed by our favorite superheroes will keep Marvel and DC properties on the Coming Soon To Theaters list. Those same movies will show on 3D and IMAX screens with an inflated ticket price. I’m still getting out of the house to watch movies and it’s not because of the 3D or IMAX screens. I still haven’t seen Jurassic World and I’m a fan of the Jurassic Park series. The last Marvel movie I saw was Captain America technically, since no one wants to believe Fantastic Four can live without Marvel Studios’ involvement. I am not a statistic in sure bet box office draws, I just like going to see movies with an audience. 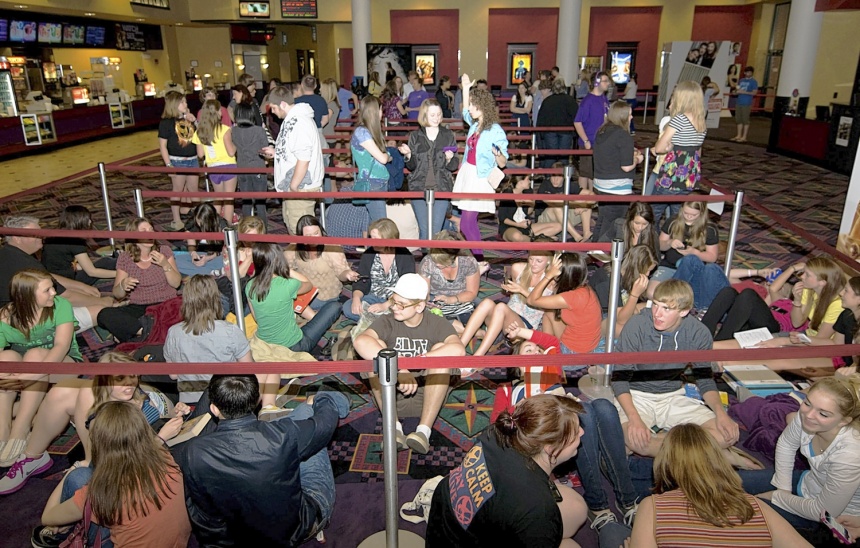 I remember when I interviewed, director, Terence Nance, about having his film, An Oversimplification Of Her Beauty,  living on Netflix instead of in theaters. The Dallas native/Brooklyn resident replied, “The theater is my church.” Film is religion and the directors are the preachers. Most directors want their work to be seen on a big screen in a theater instead of a TV in someone’s living room. (No disrespect to the 60 inch screen owners.) A pastor wants their message to be shared with as many people as they can reach so of course they’re going to use every advantage like live streaming through television and the internet, but knows a gathering in one area is where their presence will be felt the most.

If religion is too taboo to use for a metaphor, I can make the same argument with sports. I’m the type of person that doesn’t watch all basketball, football, hockey, or baseball games on TV, but if I can get tickets to watch in person I’m going. It’s usually helps when you’re around a group when you’re watching a movie you have low expectations to be entertaining. I’ve noticed that if I hate a song, all I need to do is hear it performed live with a crowd or playing in a packed club. (I still can’t believe I’ve never been to an outdoor screening.) Crowd reaction is essential for my enjoyment and if you have the new independent film, documentary that I’ve been hearing about (S/O to the Angelika.) or a special event that coincides a film that I’ve enjoyed in the past, I am going to buy a ticket