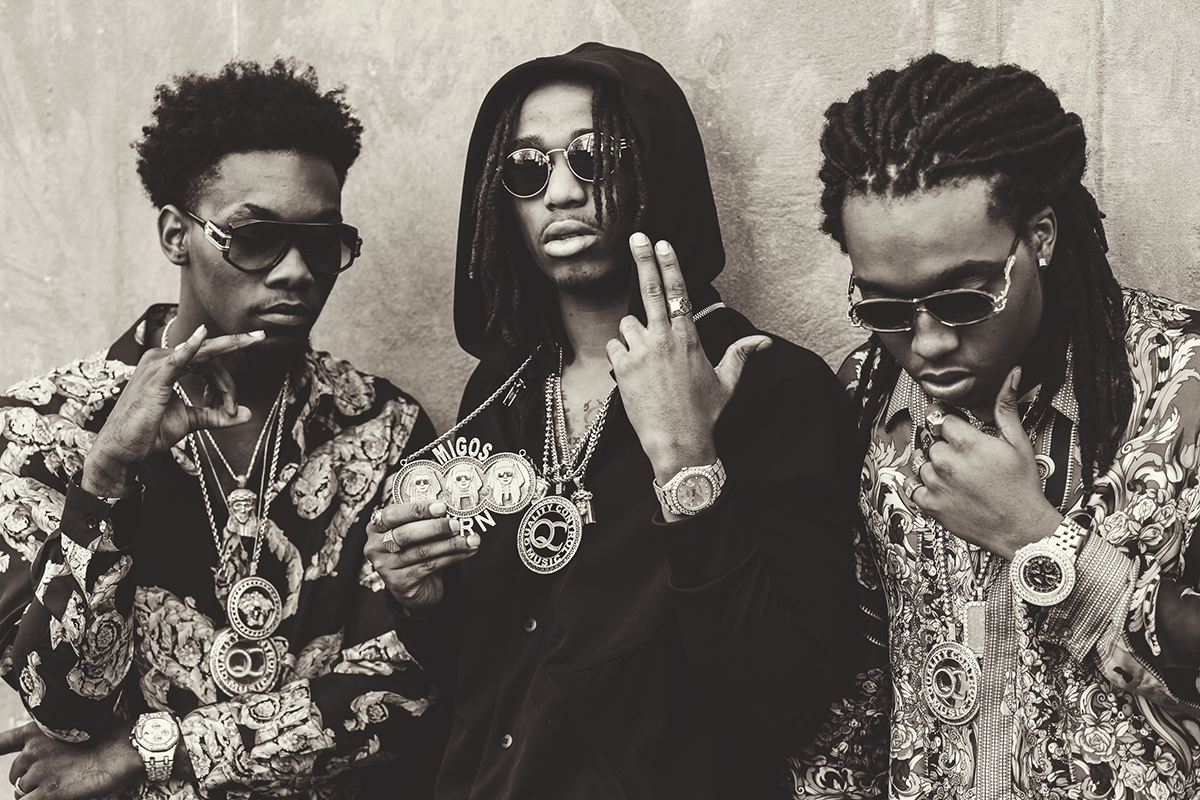 Migos is an Atlanta Hip-Hop trio from Atlanta, Georgia. Yung Rich Nation is their first studio album. Migos has always been pretty weird to me, they built their fame off some pretty average mixtapes, and some big hits (“Fight Night” and “Versace”), but they never had anything to remarkable that made me a fan or even take notice of them. They have always seemed trashy to me and as a rap connoisseur (self proclaimed of course) I felt I had no need to listen to Migos, but I think it’s time I finally give the amigos a chance.

1. Memoirs
Produced by Honorable C.N.O.T.E.
Migos starts off the album without an intro, a wise move I say considering the group doesn’t need to do much to grab attention; they are loud and proud on this track. A banging beat with a trilling piano, a classic Atlanta banger; Lyrics are okay at best (definitely no quotables), but they fit the trap beat real well so overall this song is nice.

2. Dab Daddy
Produced by Honorable C.N.O.T.E.
This song has a bass heavy beat (surprising right?). It goes pretty hard, but there is a problem, this song has the shittiest hook. The lyrics are pretty trash too. Are Migos famous for their lyrics? Of course not; sometimes I hesitate to call them rappers and this is one of them.

3. Migos Origin
Produced by Zaytoven
This song is pretty fun. Heavy bass and little hi-hats and weird noises courtesy of the various Migos ad-libs. The lyrics make sense and are decent and help an overall solid song. The lyrics seem to reflect the Migos come up, so that’s cool, I guess.

4. Spray the Champagne
Produced by Honorable C.N.O.T.E. & Murda Beatz
They celebrate their nonexistent rap crown here. Of course it’s another trap rap track where they brag hard as fuck. The beat is interesting, and breaks through the monotony the other beats have fallen into so far. The lyrics are typical braggadocios rhyming couplets; not much to it but pretty solid song overall.

5. Street Nigga Sacrifice
Produced by Honorable C.N.O.T.E.
Okay, this songs beat is pretty catchy but the lyrics are a little more soulful than the usual Migos fare with them thanking everything that got them to this point. Lyrically nothing new but if it ain’t broke… did I mention the beat was catchy.

6. Highway 85
Produced by Honorable C.N.O.T.E.
This song is about cars and stupid shit, any questions? No but for real something goes down at some gas station, which turns into a high speed chase down said highway. They talk about having single parents, whipping drugs, police brutality, so that’s good, ya know the important shit. The beat is good too and bass heavy (It’s modern day Atlanta Hip-Hop).

7. One Time
Produced by Deko
A weird droning synth is introduced on this track, it’s cool, for the sake of variety if nothing else. They talk about shit that takes one time, get high with you, lay my eyes on you, other stupid shit that you can do more than once also. Beat is good and that synth is a good change of pace.

8. Just for Tonight
Featuring Chris Brown; Produced by Murda Beatz
Ayy free breezy hoe! Outdated quotables aside this track is definitely not great. A modern day pop R&B beat carries the track and Chris Brown sings an okay hook, (I don’t know why he annoys me). If you hadn’t recognized it, this song is about one night stands; see the title and it reveals all about this song.

9. Pipe it Up
Produced by Murda Beatz
Nice beat that bangs hard. The song itself is mad catchy (“pipe it up, pipe it up, pipe it up”). They say pipe like 4000 times; its almost funny but it works real well. Lyrically they bring literally nothing to the table, but they don’t have to because this song is still fun to listen to.

10. Gangsta Rap
Produced by OG Parker, Deko, & DJ Durel
Bone Thugs sample in the beginning, and that influence feels like it penetrates the whole track. The beat sounds like a mix of 90’s mafioso rap and current trap rap. I like it. Also the lyrics ain’t ass, so that’s cool too.

11. Playa Playa
Produced by Murda Beatz
This song has a nice sound. There isn’t much too it; they don’t change up their formula, but it’s a nice song, like a bunch of shit on this album. Hoes, money, clothes, anything else?

12. Cocaina
Featuring Young Thug; Produced by Murda Beatz
Young Thugga baby! Just kidding he’s ass. That aside this song is an okay coke rap song. It ain’t no Clipse, but it’s better than Chief Keef and definitely better than Young Thug who would’ve been better never appearing on this track.

13. Trap Funk
Produced by Honorable C.N.O.T.E.
Just as the title says, this track is funky. We get some horns and a piano; it’s dope. Lyrics stay the same, but once again that’s not a bad thing. Great song on this project.

14. What a Feeling
Produced by Zaytoven
This song kinda sucks. Annoying beat, bullshit lyrics, probably one of the worst songs on this album.

15. Recognition
Produced by Deko
Nice beat, good lyrics about how they deserve more recognition, and I think they do. The Migos can get hot, and they prove it on this track. Sick beat, great hook, great song, maybe my favorite on the album, besides “Trap Funk”.

Migos stick to they guns and it goes over pretty well. If they tried to reinvent the wheel, I don’t think this album would have anything good about it. It’s safe, it’s satisfying, and it bangs, do you need anything more from ya music? It’s not album of the year material, nowhere near it in fact, but it’s a good debut, and I enjoyed it more than I thought I should. Hell, give it a spin, you may like more than I did.