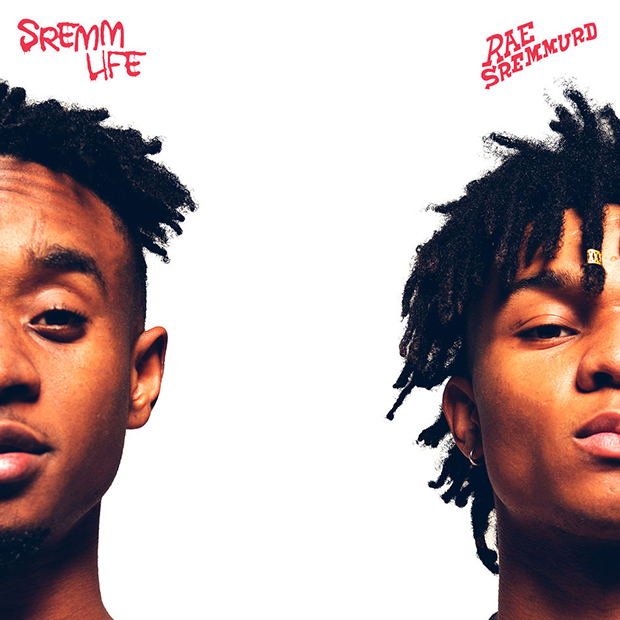 Rae Sremmurd are a new trap/Hip-Hop duo from Mississippi that consist of Swae Lee and Slim Jimmy. Their hit singles “No Flex Zone” and “No Type” became super popular over the summer for being absolutely ridiculous and catchy and now we have an album to follow the two up. There really is not much to say about Swae and Jimmy due to their lack of a discography, so it’s hard to go into an album like this with any sort of expectations aside from their already apparent gimmick. We’ll find out if that gimmick holds up for all 11 tracks on SremmLife.

1. Lit Like Bic
Produced by Mike WiLL Made-It
The album starts out with some solid production from Mike WiLL Made-It, which is standard for most of the album. The “LIT LIT LIT” and other various repeated lyrics get old very quickly, and I wouldn’t mind this if Swae Lee didn’t sound like he was 12 years old. I mean I guess I can’t give a trap album too much shit for having repetitive lyrics, but the way the Auto-Tune is done (and not that I don’t HIGHLY enjoy Auto-Tune from time to time) is very grading to listen to. The eerie atmosphere that the production presents and the loud wavy vocals kind of seem to clash in this respect. The more aggressive Slim Jimmy verse towards the end is probably the most interesting part of this track, where it sounds like he’s starting to lose his voice. A decent effort, but definitely not a hook that draws me into the beginning of an album.

2. Unlock the Swag
Featuring Jace; Produced by Mike WiLL Made-It & $AGACIOUS
Right out of the gates this track has a tremendously stellar beat. Mike WiLL & $AGACIOUS really turned it up a notch on creating what I might call some of the best trap production I’ve heard in a while. It gives off a very cool aesthetic that “locks” (no pun intended) the track in. Swae and Jimmy’s verses are total garbage, but they fit so well for the song. Less heavy on the Auto-Tune this time around, this track was definitely much more entertaining to listen to and I could easily see this one dropped at a club somewhere. Jace’s verse was much better than either of the Sremmurd boys’, which is a good thing, but it’s a little silly to have your feature outshine you and your partner on a track.

3. No Flex Zone
Produced by Mike WiLL Made-It
This song is the reason you know them. It’s dumb, catchy, and will probably be stuck in your head for a week after you listen to it. Mike Will’s production feels slightly lackluster on this track, however I think it fits the vibe nicely, after all it is a song about not flexing. Swae Lee’s prepubescent-like voice is definitely the main gimmick that attracts you to this song and I think it was the main gimmick that got it popular in the first place. Slim Jimmy’s verse is not anything special, and there really isn’t much more to say than that. Not a showstopper, but definitely fits in with the rest of the album.

4. My X
Produced by Young Chop

This track just goes the fuck in. The hook, Young Chop’s aggressive beat, and incessant shouting by Swae remind me of a Denzel Curry track or Wiz Khalifa’s “Erryday”. The track doesn’t really have a whole lot of depth but that’s completely fine due to its grand and loud presence. Young Chop, one of my favorite producers at the moment, allows the beat to go really hard, but doesn’t make it dense enough that drowns out either of the rappers, and they play off of each other nicely. Slim Jimmy probably has the better verse on this track, due to the Auto-Tune being perfectly in line with the rest of the song. If the album had 7 more tracks like this, it would be on my top 50 for 2015…

5. This Could Be Us
Produced by Mike WiLL Made-It & $AGACIOUS
… and I maybe I shouldn’t have said anything. This song feels really conflicting. Swae and Slim seem to take a more emotional approach (as emotional as you can make a song on an album like this) and it clashes with the rest of the album and the Rae Sremmurd image as a whole:

I’ve done it before, I’ve seen it before
Tears splashin’ the floor when I open the door for her
She actin’ like a whore and I’ma let her
Learned from Project Pat, pimpin’, got a masters
Girl, improvise, look me in my eyes and lie to me
Lie to me, act like I’ll believe anything
Sex on the beach and in the backseat
This could be us

It goes slightly in depth about a relationship and what it could’ve been but it’s hard to take seriously in this context. The production is solid, but I don’t know if it really makes up for this really odd attempt at a song with any sort of emotional depth. I can respect them for doing this kind of song but the way they did it gave off a vibe that didn’t really know what it wanted to be. 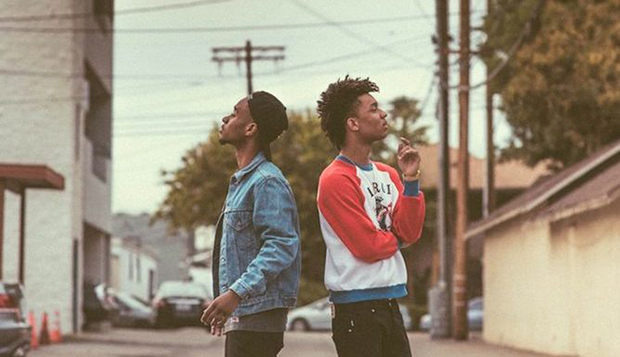 6. Come Get Her
Produced by Mike WiLL Made-It & Big Mvc
I actually don’t really know what to think about this song. The hook and overall melody sounds rather somber but the lyrics say otherwise as Swae Lee goes on about exalting a particular woman to stripper status (if going from wherever you are to being a stripper is any sort of improvement, I don’t know where the hell you’re at). The production is the most understated on the album so far, and while such production worked on “No Flex Zone”, it doesn’t work as well here since there isn’t really much else going on. Definitely my least favorite so far.

7. Up Like Trump
Produced by Sonny Digital, Mike WiLL Made-It, & $AGACIOUS
Just when I thought this album couldn’t get any dumber, this track happens. This track is the “Laughing to the Bank” of this album. This song is so stupid, that if Sonny Digital’s show-stopping production wasn’t there, it’d be almost unlistenable. Slim Jimmy’s verse on this one is most likely his best so far on this album, but it’s weird to put one of your better efforts on the latter half of your project when you didn’t have very much on the first half. This track still redeems itself slightly by being ridiculously catchy and fun to listen to, and could definitely be played at any club in tandem with the latest Sosa song.

8. Throw Sum Mo
Featuring Nicki Minaj & Young Thug; Produced by Soundz & Mike WiLL Made-It
This track takes a much different direction than most of the other tracks on this album. The beat takes a lo-fi approach and is more modest than a lot of Mike Will-produced tracks. Whether or not that’s due to his collaboration with Soundz, it’s tight as fuck. Nicki Minaj doesn’t play a huge role in this track. Just doing the hook, this says to me that either (A) Rae Sremmurd didn’t want Nicki to overshadow them and Young Thug or (B) Rae Sremmurd didn’t pay Nicki enough to do anything other than a hook, but I’m not gonna hate on that because these guys are still relatively new in the game. Swae’s verse is the first time he doesn’t sound under 18 on this album, and he definitely goes in on this track too. Young Thug’s verse is at least just as good as the other two and it kind of highlights how Thug is a better Auto-Tune rapper than either of the Sremmurd boys (I still wouldn’t call him a musical genius to any extent though). Overall this definitely one of my favorites so far.

9. YNO
Featuring Big Sean; Produced by Mike WiLL Made-it & $AGACIOUS
This is the token “used to have nothing now have everything” track that every rap album needs… and there really isn’t much to say about this track other than that.

The beat is good but it doesn’t really offer any large presence like so many of these other tracks do. This is also the longest track on the album and it really wears down by the time Big Sean’s verse comes, which is also isn’t anything that special. The entire time I waiting for something new to happen and it kind of didn’t.

10. No Type
Produced by Mike WiLL Made-It & Swae Lee
This is the other reason you know anything about Rae Sremmurd, but definitely a better one than “No Flex Zone”. The heavy synth chords give this track a cool, minimal aesthetic, that still has a big presence. Swae Lee’s hook and verse are both really on point, with his verse probably being the best on the album. Slim Jimmy’s doesn’t really distinguish from the rest but it isn’t bad enough to be offensive in anyway. I was a little confused that there was one more track after this, because this song would be a really great way to end an album, but that doesn’t detract from it.

11. Safe Sex Pay Checks
Produced by Honorable C.N.O.T.E., P Rich, & $AGACIOUS
“Safe Sex Pay Checks” could have easily been a single for this album. There’s nothing really special about this track, but I’d be lying if I said it wasn’t a banger. I could easily see this song played at any club and going off immediately. The Auto-Tune seems to flow nicely with the rest of the track and Swae and Jimmy play off of each other well too. The production has blaring square wave that acts as the melody and just rides for most of the song. A good way to end an album, but it makes me wish there were more tracks like this on the rest of the effort.

Bottom Line:
Overall, there is definitely some serious effort put out here from Rae Sremmurd. There’s definitely not lyrical genius on this album, nor is there anything in the way of what I’d call a “masterpiece” but for a first album Swae and Jimmy definitely put together something that has merit. This is definitely one that might grow on you if you listen to it enough, as silly and dumb as it can be. Once Sremmurd finds their sound, they can definitely put out more consistent shit in the future.