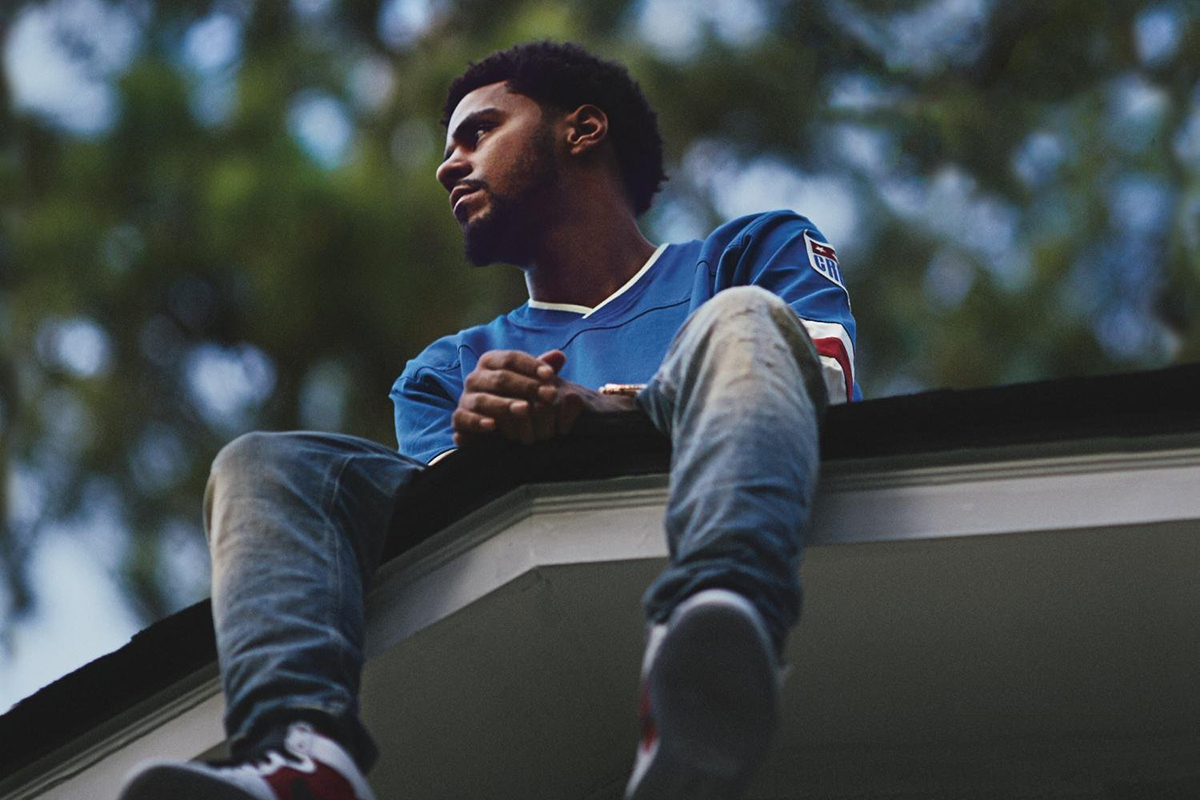 2014 Forrest Hills Drive is the third studio album by Jermaine Cole otherwise known as J. Cole. This album is dropping under Roc Nation, Dreamville and Columbia records. The name of this album is the address that Cole grew up in Fayetville, North Carolina. He bought this house after it was foreclosed from his mom years ago and is now renting it out for people in Fayetville.

Before I even start my review of this album, let me state this now. I love J. Cole and the whole Dreamville group and everything they stand for. I personally think J. Cole is the best rapper out right now, yes that means better than Kendrick. With that said, I’ll try to keep my bias to a minimum.

1. Intro
Produced by J. Cole
“Intro” starts off with Cole getting super soulful here. The repeated line, “Do you wanna be happy?”, shows what a common theme of this album is gonna be. He clearly is thinking about what brings happiness and how you do get it. Nothing too special here, just a short soulful intro and something we’re used to with Cole.

2. January 28th
Produced by J. Cole
This is the Cole I and every other Cole fan loves. Another soulful beat, with great lyrics. He talks about how he came up and highlights some of the problems with being a Black man in America while using the chorus to bring it all back to him. He’s very focused on not selling himself out. BUT there’s something different in this song that we don’t normally hear from Cole. Cole is name dropping at the end of this song:

We don’t normally hear this from Cole. He’s saying he is the best now, but just wait there’s more to come on what Cole believes is now his time to claim the throne.

3. Wet Dreamz
Produced by J. Cole
 One of Coles biggest talents as an MC is his ability to storytell. That talent is on full display throughout this entire song. The song talks about how he lost his virginity and the feelings he felt. The coolest thing about this track is how honest Cole is with himself. He makes his music for his fans and he feels so comfortable around them. It’s cool to see an artist be so honest in his music, this isn’t a braggadocious song talking about how he gets so many hoes. No, Cole is opening up in ways that not too many rappers do.

4. 03′ Adolescence
Produced by Willie B.
This song interpolates “Runnin” by Biggie & 2Pac. Again Cole is showing his storytelling ability. The beat is dope and is verses seem so realistic. The last verse on this song is the best one of the whole song to me. It’ so real, it takes us back to in time when Cole was 18 and talking with one of his friends who was selling drugs to support his family at the time. Cole talks about how his friend reminded him how special of an opportunity he had to be going off to school and its cool to see how great Cole is at reminiscing and bringing up these real stories in his music.

5. A Tale of 2 Citiez
Produced by Vinlyz
Something to bump your head to in the car or gym; the beat is crazyyyyyyy. Whatever that damn sound is in the background goes so well with this song. He’s talk about living in the Ville’ (Fayetville) and how he had big dreams of making it big. Dope beat, catchy lyrics, and great job from Cole. Run It!

6. Fire Squad
Produced by Vinlyz
Okay, this song is just… ahh. I’ve been a J. Cole head for a longgg time now, before Friday Night Lights. I’ve listened to so many of his songs but this is one is unlike the rest. Cole is actually talking shit here. First line in the first verse, “Ain’t no way around it no more, I am the greatest.” Cole’s intentions are clear here, he’s finally asserting his dominance as the top rapper out now. All three verses are incredible but the final one sticks out the most:

Listen
History repeats itself and that’s just how it goes
Same way that these rappers always bite each others flows
Same thing that my nigga Elvis did with Rock n Roll
Justin Timberlake, Eminem, and then Macklemore
While silly niggas argue over who gon’ snatch the crown
Look around, my nigga, white people have snatched the sound
 This year I’ll prolly go to the awards dappered down
Watch Iggy win a Grammy as I try to crack a smile
I’m just playin’, but all good jokes contain true shit
Same rope you climb up on, they’ll hang you with
But not Jermaine, my aim too sick
I bang nigga, I came to bring the pain my brain too quick
You see how I maneuver this game, I ain’t stupid
I recognize that life is a dream, and I dream lucid
And break the chains and change minds, one verse at a time
And claim 2-6, and fuck it, if the shoe fits
Who’s the king?

7. St. Tropez
Produced by J. Cole
An abrupt difference from the previous song, but again a cool song. St. Tropez has been quite often referenced throughout Hip-Hop as a desirable place for rappers to go. The hook is referring to Cole’s career and how his career is on this arch and he’s on the rise. He samples “That’s All Right With Me” by Esther Philllips.

8. G.O.M.D.
Produced by J. Cole
I love this song, it’s one of my favorites on this album. This song is for all of his haters hence the name of the song (“G.et O.ff M.y D.ick”). He switches up the song a lot not only addressing the haters he has but to bring light to how fake people are now. He talks about how he feels actual emotions and how he has never had true love but people don’t want to talk about that they just want to be fake.

9. No Role Modelz
Produced by Phonix Beats
Alright this is my favorite song on the album, no question. It’s clear not only was Cole focusing on making an honest album but a socially conscious one and he often addresses problems he see’s in society. Throughout the song he talks about how as a Black community we lack role models that aren’t rappers or athletes. In the wake of the recent deaths to Mike Brown, Eric Garner, and Trayvon Martin I think this song is needed. Cole is trying to uplift the spirits of Black people by bringing up the problems he see’s. Also the diss to George Bush towards the end is dope, you have to catch it.

10. Hello
Produced by J. Cole
Cole is such an honest artist by bringing his fans to a past relationship of his. As a true day one fan I appreciate songs like this, to see one of my favorite artist be so honest with himself and pour that through his songs is dope to me.

11. Apparently
Produced by J. Cole
Cole is portraying his dreams through this song and gets soulful like we know him to do. He has a really catchy hook here and the way he switches his flow up at the end shows his lyrical ability.

12. Love Yourz
Produced by Illmind, Cardiak, & CritCal
This beat is great and Cole is again reflecting on the struggles he had growing up. He talks about how important it is to realize how important family and love is. Typical Cole on his deep soulful lyrical stuff.

13. Note to Self
Produced by J. Cole
I think this outro may be the longest ever on a rap album. Cole takes a good chunk of this song to address his fans and how he feels about the album and what it means to him. He treats it like the credits but all true Dreamville fans will care to stay for these credits.

One of the illest parts of this album is how it came about. If you haven’t already you should all take a look at this vide. It talks about how this album even came about and really allows people to see Cole in a new light. There were no singles to this album, no interviews, just a listening session for the fans in his home and that’s it. Cole wants music to go back to being about just that the music not the chains and cars and clothes and women that don’t matter. He wants to portray the real and this album does that.

Cole is one of the realest rappers out there to me and the best. His song, “Fire Squad” has him take the crown and at the same time throw it away saying that there is no king in Hip-Hop. Interesting take on it all, but I think all true Cole fans are happy to say that Cole has finally asserted himself as the most dominant rapper out there. Now the rating… With the recent buzz on the site and the questionable rating of BIG K.R.I.T.’s album, I want to give this a five everything about it says classic to me. The promotion of it or (lack of it) is genius. The fact that you put this album on and the only button you’ll press is the one to turn it up or a rewind button; there’s no skips at all. So to me this album is the next closest thing to classic. Thanks Krit!