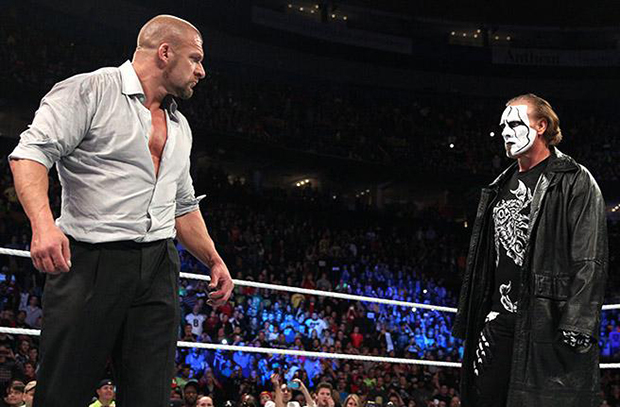 The 28th annual Survivor Series is in the books. I guess I could go over the whole card, but I know you read that post title: Sting finally appeared in a WWE ring.

The main event was just plain fun. I’ve always liked the old school Survivor Series format and I missed it being apart of the event. Also, I know it was good because I got off my bed and watched the last 10 minutes of it sitting on the floor like a kid.

If you didn’t see it, I guess another surprise is that John Cena wasn’t involved in the ending. Nope. It kinda reminded me of No Way Out in 2009 but instead of Super Cena getting eliminated after 3 finishers, the betraying fist of Big Show caused the elimination at Survivor Series (Surprise, Big Show once again betrayed somebody). You could say the real star was Dolph Zigger finally getting some well deserved shine by overcoming a 3 to 1 deficit. But then you have to forget that Sting appeared with some new cool theme music and Scorpion Death Dropped Triple H to help Team Cena (Team Ziggler) win.

It looks like it’ll be Sting versus Triple H at Wrestlemania next year, which when you think about it may be the next best thing to Sting versus Undertaker. Before checking out the results below, check out the GIF of the Night: