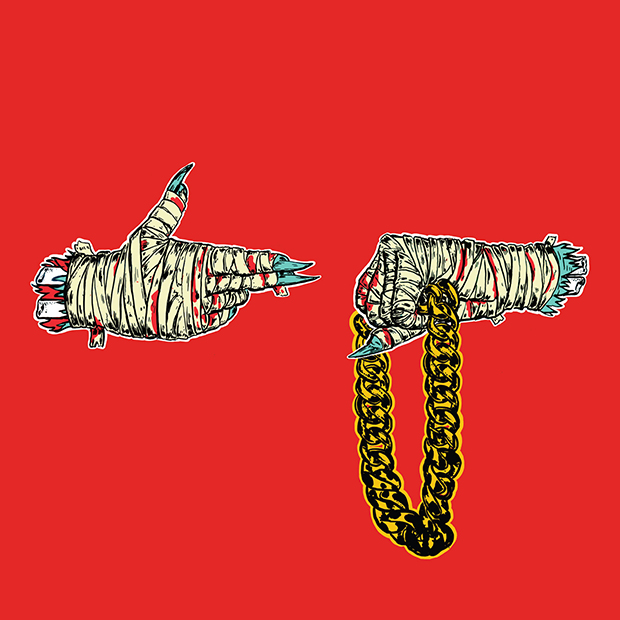 Killer Mike and El-P struck creative gold when the two paired up for Mike’s sixth solo album R.A.P. Music in 2012. The two formed such a strong bond that they teamed up again in 2013 to create the scarily named group Run The Jewels. Their self titled debut album has so hard hitting that they just couldn’t help themselves and bring out a sequel with Run The Jewels 2. With Killer Mike handling half of the lyrics and El-P taking care of beats and other half of the words, it should be interesting (and terrifying) to see where they take us.

1. Jeopardy
Produced by El-P & Little Shalimar
It only seems right to start the album off with Killer Mike’s booming voice creating Muhammad Ali like boasts as the beat by El-P and Little Shalimar builds up. No punches are pulled on the opening track which feels like a kick to the stomach…in a good way. RTJ are here and it’s business time. The best line goes to El-P with: “Run The Jewels is the answer and the question is what’s popping”. Dope intro.

2. Oh My Darling Don’t Cry
Produced by El-P, Little Shalimar & Wilder Zoby
This song has been floating around since mid September like a teaser trailer for RTJ fans. The trippy beat will keep heads bobbing in fast motion as Mike and El menace their way through the track. If there ever was a song that could be used to communicate with aliens, this would be it. The beat is so infectious and out of this world that it only seems right if a grown up E.T. would jam to this song while smoking some good space bud. Fun fact: Police Academy‘s Michael Winslow does some of the sound effects on this track.

3. Blockbuster Night, Pt. 1
Produced by El-P
Guess what? Another menacing track from the duo but you know what, this is fine. In a rap environment where the softer side of rappers has come out it’s kind of nice to be smacked in the face by a hardcore track every once in a while. The beat goes so hard that DMX might run in fear…or jump on it for a remix. With only just over 2 and half minutes of music RTJ makes this a smash and grab job. It’s beginning to become clear that this album is strictly made for the RTJ fans and that’s a-okay.

4. Close Your Eyes (And Count To Fuck)
Featuring Zack De La Rocha; Produced by El-P
There are a lot of elements to this song to get excited about: Killer Mike speaking on starting a jail riot and water boarding a warden. EL-P’s grimy beat and equally dirty rhymes. But it’s the feature that’s the most intriguing. Rage Against the Machine’s Zack De La Rocha picks up the microphone was again to spit a verse. This isn’t the Rage lead singer/rapper we’re used with him screaming over a metal track. Nope, this right here has De La Rocha spitting out flows that any MC should be jealous of. Such a banger right here.

5. All My Life
Produced by El-P & Little Shalimar
The dial gets turned all the way down and that’s probably a good thing considering the intensity of the last song. But make no mistake, slow doesn’t mean soft as the beat and MCs go hard. El-P is such a gritty rapper and producer and this song proves it. He even sprinkles in some conspiracy theory lines about Paul McCartney’s death being covered up. Heavy shit. Also the chorus cries out in just enough pain to pull your ears a little chorus to the speaker. 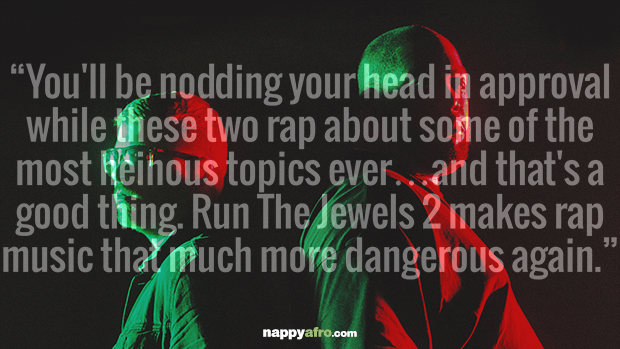 6. Lie, Cheat, Steal
Produced by El-P, Little Shalimar, & Boots
This might be my favourite song on the album so far. The track has enough levels to keep listeners guessing. When the beat goes one way for a verse, it switches right up for the sing-song chorus then moves along a new path while holding onto to its foundations. Dope song about being a dirt bag.

7. Early
Featuring Boots; Produced by El-P & Little Shalimar
Did I say that last track was my favourite? Well it might have to be my second favourite since this banger has come along. Killer Mike’s verse touches on police brutality while El-P asks prolific lines like: “You want cash or hope?”. This line might be the perfect way to sum up this album so far. RTJ2 has been giving listeners 100% quality music as we venture into the second half of the album.

8. All Due Respect
Featuring Travis Barker; Produced by El-P, Little Shalimar, & Wilder Zoby
Who would have thought that when Blink 182 drummer Travis Barker appeared on Game’s “Dope Boys” track in 2008 that he would become a hot feature for years to come. Even though his features on rap songs are few and far between it’s always curious to hear what he contributes. Of course here he puts together some banging ass drums. Killer Mike definitely has the best verse. El-P gets extra gangsta and grimy on this track talking about wearing sweat pants to funerals while Mike hits where it hurts with these lines: “Hey little buddy, where’s your mommy?/Call me stepdad or Uncle Johnny/Here’s a dollar don’t follow behind me/I gotta go bang out mom and auntie”.

9. Love Again (Akinyele Back)
Featuring Gangsta Boo; Produced by El-P
When’s the last time you heard a decent rap song dedicated to oral sex? Exactly. Well here’s one to add to that top 10 list. The chorus is pretty hilarious and the beat goes hard as usual. Just to even out this somewhat sexist track Gangsta Boo shows up to tell these fuck boys what she likes. Here’s a clue: It involves your tongue in an unholy place.

10. Crown
Featuring Diane Coffee; Produced by El-P & Little Shalimar
If you blink you’ll miss the transition from the last song to this song since the album has flowed flawlessly. Mike and El have done a good job with not putting too many hard hitting songs together in a row. This track slows the pace down once again. Picture this like a moment to catch your breathe before the grand finale. The beat features some awesome electric guitar and spaced out sounds. El-P flows so well on this track, but then again what do you expect from a rapper who creates the beats he raps over. He knows exactly where each twist and turn is.

11. Angel Duster
Produced by El-P & Little Shalimar
And here we are, the final song. So far we’ve heard a range of consistently good tracks and this is no different. It almost reminds me of the final track from Watch The Throne but with a RTJ twist. My neck has gotten a bit sore from nodding to all these songs and this one keeps that pain coming. We do end on a sour note in the sense that these two MCs are still spitting pretty bleak rhymes but they just make it sound so good. Awesome outro.

Bottom Line:
It’s a really good thing for rap music that El-P and Killer Mike have joined forces again to create a piece of music that is so uniquely disturbing. You’ll be nodding your head in approval while these two rap about some of the most heinous topics ever…and that’s a good thing. Run The Jewels 2 makes rap music that much more dangerous again. While it’s cooler to rap about the softer things in life now, RTJ roll that concept up in a carpet and throw it over the bridge. While it’s clear that Killer Mike gets the better of his partner in crime lyrically, El-P still holds his own by creating some killer beats and flowing like a champ. Make no mistake though, he is not rhyming in a simple pattern. Everything about this album is cocky, even the production. The beats are so boastful they scream “fuck you pay me!” before you even get the chance to digest the lyrics.

The best part of this album is that the sounds are so unique. The only artists they bite off are themselves as this sequel does feature some of the same elements we got on the first album but as they say, if it ain’t broke don’t fix it. The sound of this album can only be made by these two artists and other MCs can only hope to jump aboard as a feature to come close to it. Though this group is in a league of their own they could be likened to a version of Watch The Throne that’s less focused on making hits and more inclined to creating music that will have Hip-Hop heads nodding with praise and middle-class parents fearing rap music once again.