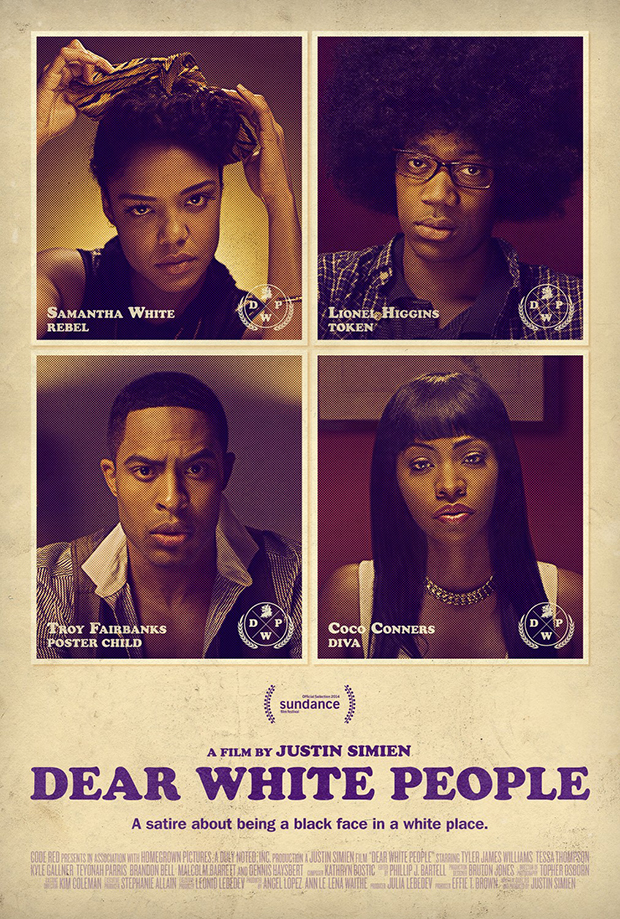 The movie starts with the introduction credits and sounds from television shows that we have all come to hear like, “in the case of 40 year old Tyrese, you are not the father” and sounds of arguments from Black reality stars shucking and jiving for a check. You know, the kind of stuff Black people are known for nowadays. The movie actually starts towards the end of the story, where the news is reporting that a predominantly white fraternity had put on a “Hip-Hop” costume party on Halloween. The party saw many white kids dressing with oversized T shirts, fake guns, fake jewelry, and even going as far as wearing “Black Face”. This party causes a “riot” from many of the African American kids at the Ivy league school The movie follows 5 main of characters (4 Black, 1 white) days before the party takes place and it gives us an opportunity to watch their journey unfold. 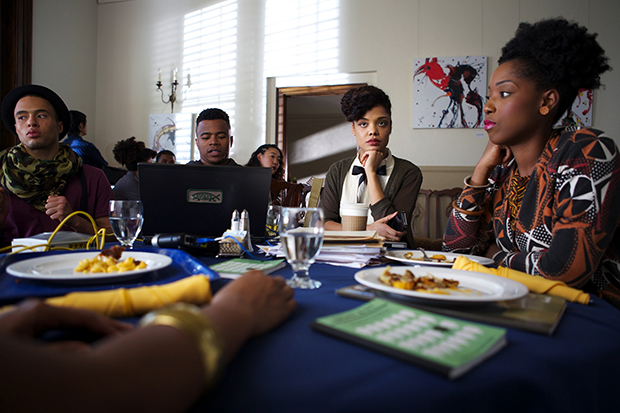 Samantha (Sam) White played by Tessa Thompson: Samantha is a young aspiring activist who is determined to hold society accountable for the negative connotation that has been assigned to Black people through media and in day to day life. She runs a radio show called Dear White People and is very heavily involved in issues involving race at her school. Our protagonist leads, even though unwillingly at times, a group of young Black students in the journey to self-understanding and equality amongst their fellow students She is the main character and was wonderfully played by Tessa.

Troy Fairbanks played by Brandon P Bell: Brandon is the golden boy of the film. His father is the dean of students, and he has been the “Head of House” for the for the Black fraternity. He starts off the movie dating a white student, the President of the University’s daughter, and is found hiding who he really is from most of the white students and his father through the movie. Troy does a great job of creating a character that you root for and hate at the same time, but you hope that he makes it out of this film okay.

Tyler James Williams played by Lionel Higgins: Tyler is the proverbial outcast. He doesn’t quite fit into either group. The way he sees it, he’s Black so he isn’t a part of the white in crowd, but he isn’t stereotypically Black enough so he doesn’t think he will be accepted. His role is very interesting, and is rarely seen on the big screen. Although Tyler’s character has some moments that will make most of our staff feel uncomfortable (I found myself wanting to yell expletives towards the screen), it’s great to see a Black character have more complexity than we are used to being devoloped. Lionel (Everybody Hates Chris) plays this role better than anyone else I can imagine.

Colandrea “Coco” Conners played by Teyonah Parris: You know or have known this woman. She is a beautiful Black woman who has a lot of inverted hatred. She hates herself, and even more she hates being Black and everything that comes with it. She hates it so much you only see her without blue eyes at the end of the movie. She even goes as far as calling Troy Fairbanks “cute…. for a Black boy”. Teyonah does a great job displaying the inner turmoil of this character

Kyle Gallner played by Kurt Fletcher: He may be considered the antagonist of the story. He develops a not so friendly rivalry with Sam. He’s the stereotypical privileged white kid with a grudge. Kurt played this character so well, that I caught myself really getting angry during two of his monologues. I had to remind myself it was just a character he was playing. 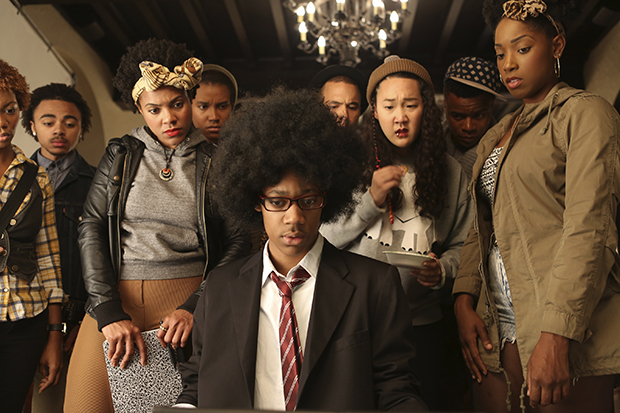 The supporting cast had very few big name, but it did introduce us to some new and exciting young performers. Characters like Reggie (Marque Richardson) and Gabe (Justin Dobies) will, just as well as the main cast, intrigue and connect with you on many levels.

Final Thoughts:
Dear White People has been best described as a satire about “being a Black face in a white place”. Although the movies expresses some issues in comedic ways, it does a great job pressing just how important understanding just how insensitive some people are and how Black people have been almost demanded to “code switch” in public. I’ve already read reviews from predominantly white outlets of the media saying things like “What if there was a Dear Black People Movie?” and I see that the point of this film was lost on them. Justin Simien (writer & directorr) does a great job on leaving the door open. He isn’t claiming to have an idea about what is truly right and wrong, but he is attempting to spark a conversation. One true sign of a great film is that even when the movie ends, you wonder what the characters do moving forward from that point. Justin does a great job of leaving us wondering.