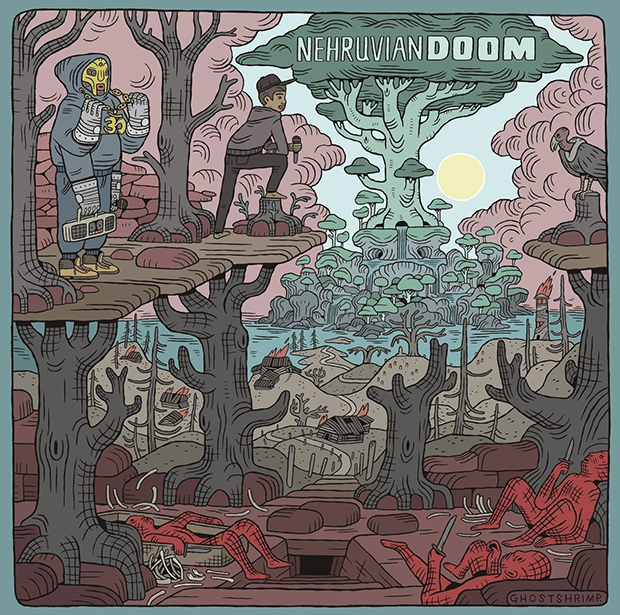 Bishop Nehru and MF Doom team up to form the duo NehruvianDOOM. This is the debut album from the young emcee that resides from Rockland County, New York. He just turned 18 a month ago, but he’s been recording since 13. He’s been on all the New York radio stations and was introduced by Nas as the “future of music”. Kendrick Lamar also gave him props backstage at the SXSW Festival saying, your “fresh and doing a beautiful thing”. Not to mention he has already hooked up with LRG to release an EP collaboration with Dizzy Wright and producer 9th Wonder. Earlier this year, Bishop signed to Nas’ new label Mass Appeal Records.

Enter MF Doom aka DOOM aka Metal Fingers aka King Geedorah, etc. Doom was once Hip-Hop’s hottest new thing with his abstract producing style and even more abstract rhymes. Lately, he has been quiet, since his last album in 2009, he has gone to produce an album with Masta Ace which featured recycled beats, and then he hooked up with Jneiro Janel to produce an album that was good, but again fell short to fans’ expectations. Now, he joins newcomer Bishop Nehru to release NehruvianDOOM. Will this be another album that falls short (especially production wise) or will this be the return of the MF Doom that everyone’s missing? Let’s find out.

1. Intro
Doom drops a dark melodic beat to start the album. He cuts a lot of sampled sayings and has a continuous female vocal that sounds like it came from a horror movie. This is a nice intro track that begins to build the theme of the album.

2. Om
Om is the word Hindus use during meditating. Doom samples the word and flips it into the loop. Doom also open with the chorus which is in rhyme form. It’s about meditating to find your third eye. Bishop Nehru makes his first appearance on the record and drops a couple verses about keeping a positive mind state to reach his Hip-Hop dreams. I liked how Bishop kept on with the concept and by doing it his way. This is definitely an early standout.

3. Mean The Most
Bishop displays his singing skills as he starts the track with a hook about how he cares for this special girl. He believes that she has to notice him by showing immense affection towards her. I’m not really feeling this track. The hook and bridge can get really repetitive. The two verses are good, but don’t do much to standout.

4. So Alone
Things get a little depressive on “So Alone”. Bishop goes into a stressful mind state as he raps about being lonely and not having anyone. It sounds like he’s going crazy in his head with every bar on this track. There’s nothing too special here. I understand you can be lonely and depressed, but give us a picture of that, just don’t repeat over and over again that you’re lonely. Ehh…I’ll have to pass on this one.

5. Darkness (HBU)
Doom drops his “Bergamont” beat from the Special Herbs, Vols. 9 & 0 album. Some may complain that this is a recycled beat, but I think it fits perfectly with the album. After seeing the album cover, this is what you’d expect to hear on the album. The track starts with a hook about this cruel world that is filled with darkness and how the majority of people are setup for failure. The hook is followed by the bridge that is about seeing things from a clear eye view (the third eye). His first verse is clearly his best five tracks deep. Another standout here

This life is like a mystery, look how the world’s sent to me
Today I’m in the industry, next I’m ended history
Physically won’t allow it, my mental is not a coward
Still thoughts are devoured worried bout if now’s the hour
Getting showered in this bad news, bombings and capped schools
Need capsules for my brains strain that’s the pads route
I express this stress that infests my chest, its best
The next step is a rope as necklace
That’s suicide aside, I got pride in mind
And a pretty bright future, guess it’s time to grind
My shine, getting impressive though I’m still selective
With who I let give me hard times and who I let live
This world is full of mischief, and bodies tryin’ slick tricks
Moving thick bricks, is not the only way to get rich
You, gotta learn the think or you’ll fail then
There goes another statistic dead or in jail
Let’s prevail 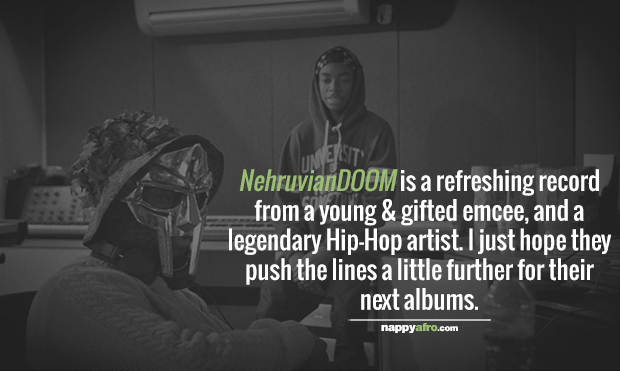 6. Coming For You
Doom uses the recycled beat “Fo Ti” from the Special Herbs, Vol. 7 & 8. This is another old beat that fits with the album, but it can still be disappointing because there are only nine total tracks on the record. The hook repeats, “I said Emperor Nehru, we’re coming for you/Yeah Emperor Nehru we’re coming for you”. The beat and hook shape the dark theme that matches Doom’s villain alias. The passion behind Bishop really starts to show with his smooth delivery and polished rhymes. This is a good dark track that fits the album.

7. Caskets
We finally get a verse from MF Doom here. The intro starts with a sample saying, “Young blood, he’s smart and he’s tough, but he’s got a lot to learn about survival and the man he’s gonna learn from is…DOOM!”. The villain has the first verse as he brings out his unique character for the track. It’s nice to hear a Doom verse, but I felt like Nehru came with the better verse. The spotlight comes when Doom flips the beat halfway through Bishop’s verse as he rhymes:

I’m feeling blanker than a CD ROM
And all I ever wanted was for them to see these rhymes
They telling me be patient, I ain’t got the time
Cause I’m seeing trash rappers getting overnight shine
While I’m still behind, and they ask why I whine
Is it because I’m living off the thoughts in my mind
Or is it I’m just living because nobody is complying
I see that I’m inspiring the moves of these sirens
But how could I be vibrant?
Only thing I’m close to is violence
So hurry up and cue all the violins
Looking for my violins
Ever since the girl I was eyeing for prom
Ain’t wanna tag along, it’s something that I long
But I understand the order though
Life’s like a big playbook full of audibles
You never know the working play until you go toss a few
Packing rappers in caskets your boy Nehru

8. Great Things
This track starts with an intro followed by the hook that really starts to show Doom as Bishop Nehru’s mentor. Nehru’s first verse really brings out the kid’s swagger as he rhymes, “Got smooth beats and verses/Rappers mad cause I show ‘em hearses/It’s not my purpose they just worthless/It ain’t worth this time, rehearse them lines/Me, I never had to practice, I just wrote and shine”. MF Doom comes through with his second verse for the record. He shapes his lyrics like it’s written to Bishop about achieving his dreams in the game. This is definitely more of a highlight compared to his first verse. The last verse from Bishop counteracts Doom’s verse on how he’s learning more about the game and how he’s going to strive in Hip-Hop. This is a great track and standout that shows the chemistry between the two.

9. Disastrous
This is the third and final track that features a verse by MF Doom. Bishop gets on the mic first and drops bars that sounds very familiar to what he’s been saying throughout the album, “Welcome back here’s more to rawness/Flows gorgeous, and no this ain’t no ’94 shit/Still classic, know you won’t surpass this/I keep the masses stagnate by spitting this tracks/It’s pretty easy, it’s not difficult, believe me”. Doom closes out the album with a “doomsday” verse that relates to his villain persona. It’s not the best, but not a bad way to end the album.

Bottom Line:
Bishop Nehru definitely has talent, but he has a lot to learn after listening to NehruvianDOOM. He needs to work more on making deeper songs. His flow is nice, but he falls into the gap of just rhyming about the same topics. I also felt like once again Doom disappointed several fans. No beats were really that mesmerizing like he has created in the past (besides the recycled ones). I don’t feel like his heart is in Hip-Hop like it once was. His three verses were good, but not too memorable. Nevertheless, NehruvianDOOM is a refreshing record from a young & gifted emcee, and a legendary Hip-Hop artist. I just hope they push the lines a little further for their next albums.