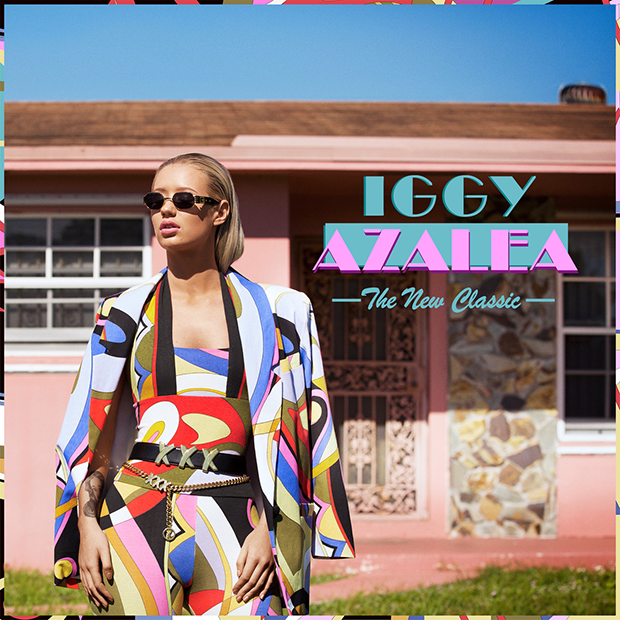 Despite all of our beloved country’s shortcomings, the one thing that controversy has not been able to delude the allure of the American Dream. A dream so powerful, in fact, that it made a 16 year old Australian girl lie to her parents, transplant herself to the other side of the planet and settle down in Miami to pursue a career as a rapper. Iggy Azalea may not be the most experienced artist on T.I.’s Grand Hustle imprint, but she’s definitely at the top when it comes to dedication to her dream.

It’s that heart and determination that has fueled s slew of buzz, mixtapes, and now her first proper release. Is Azalea’s debut the classic its title suggest it is? Scroll down and see.

1. Walk The Line
Produced by The Invisible Men & The Arcade
We get things started with a wailing backdrop which gives the track a chilling air of importance. Iggy asserts that she’s come a long way and that it’s now all or nothing for her. Azalea has been criticized for trying to appropriate a rap voice that is nothing like her natural one. That may be true but when evaluating the product you can’t deny that it’s effective. She has a brash, confident delivery that helps make her boasts believable. Great start to the album.

2. Don’t Need Y’all
Produced by The Invisible Men & The Arcade
Think of this as the female version of “No New Friends”. I could easily see this as the new anthem for the emotionally void youngsters who are too cool to admit that they need folks. The Invisible Men keep things slow and airy, but without the punch of the opening track. The song still works though as Azalea’s double time flow meshes well with the beat. Lyrically, her words are more akin to those really long, faux inspirational messages plastered over a celebrity’s picture that you find on Instagram than what you might in a Shakespearian classic. Yet knowing her backstory as a social outcast in her home country who’s love of rap made her a misfit helps give the song the teeth that the words alone couldn’t.

3. 100
Featuring & Produced by Watch The Duck
Atlanta producer Watch The Duck gives us some nice, frenetic guitar riffs which give a welcomed shot of energy to the album. Iggy uses one of the kiddies favorite sayings for the title. 100, or one hunnid (or one hunnuh, if you’re Chief Keef) is all about keeping it real. For Azalea, real means buying a whole bunch of shit with depreciating value and constantly threatening her partner’s belongings because she’s ratchet like that and won’t except him messing around (although she will let him keep his gun in her glove compartment. And no that is not a double entendre). If you can turn your brain off and ignore the shallow vapidity of the song you should enjoy the song as the beat and Iggy’s flow are good, but I wasn’t able to do so.

4. Change Your Life
Featuring T.I.; Produced by The Messengers
The third single from the album, if “Don’t Need Y’all” was the female version of “No New Friends”, then “Change Your Life” is the Grand Hustle version of “Upgrade U”. The Messengers craft an electro backdrop for Iggy and her boss T.I. to woo their potential mates with promises of taking them to the next level. The beat is kind of cool and T.I. always sounds right at home when playing the sugar daddy, but when you break it down all the song is really just a laundry list of things the duo can buy for someone. There’s definitely an audience for this song, but I’m just not part of it.

5. Fancy
Featuring Charlie XCX, Produced by The Invisible Men & The Arcade
The Invisible Men & The Arcade come back and give us something that sounds like it’d be right at home in Scarface. The base and synths sound really polished. This song is the second single from the album. As the title suggests, Iggy lets us know about her wealth and her possession, which she’s done for the last four songs. Some may argue that she’s only doing what 75% of rappers do, but for a genre that used to pride itself on originality, that shouldn’t be a pass. The only saving grace so far has been the fact that Iggy sounds really good and she’s had great production so far. But when you look past all the glitz and glamour, there’s not much to see.

6. New Bitch
Produced by The Invisible Men & Dyer
Yeaaaaa….. This song made me feel really uncomfortable. I know that the term ‘bitch’ has been co-opted just like ‘nigga’ to be a term of affection and for some a term that brings empowerment. Social context aside, I’ve listened to Too $hort songs that made me cringe less than this. I don’t even think it’s the term that bothers me so much as the fact that Azalea makes being some dude’s bitch such a vaunted position worthy of adulation. To be clear, nothing in the song sounds like the makings of a legitimate relationship or that the two parties involved actually love each other. I know I probably sound really old but I can’t rock with this. 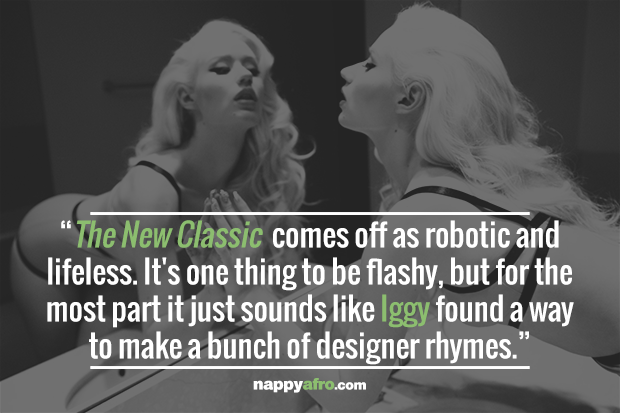 7. Work
Produced by 1st Down & The Invisible Men
This was the original single from the album and it kicks off the second half of the album. As the album progresses the sound has morphed into more electro-pop/house with minimal Hip-Hop influence. As the can imply from the title, the song is about all the hard work Iggy has put into making it in the rap game. With someone with such an amazing story on how they broke into the game, you’d think she’d actually infuse it more into her bars. Yet we get more generic lines about hustling that sound more contrived than genuine. Not a bad song, but something that should be so much more.

8. Impossible Is Nothing
Produced by The Invisible Men & The Arcade
We get some distorted sirens and high hats for beat for this track. Once again Azalea is talking about her success, this time in the context in telling folks to follow their dreams no matter what and they’ll be just as successful as she is. Props for the positivity but my problem with this song is the same one I had for the previous one. You have an amazing story of hard work and dedication. Yet it hardly makes its way into the music. Once again another missed opportunity.

9. Goddess
Produced by The Invisible Men & The Arcade
Here we find Azalea dissing her detractors and haters and labeling herself as a goddess. Even though she’s not saying anything different from the last eight songs at least imagining this directed gives it some much needed meaning and purpose, something that has been desperately needed throughout this album. Iggy’s flow would be perfect for battle rap, even if her bark doesn’t pack much bite:

Ain’t this what y’all need me for
You done pissed me off what is y’all leaving for
Oh what? A white girl with a flow ain’t been seen before
Bow down until your knees get sore
Treat Neimans like a grocery store
Selfridges get the same rapport
Ask Bey’ when we off on tour
Hopping out a fly whip screaming “This ain’t yours”
How famous can one get ‘fore she get tired
One phone call that make all the money get wired
Uh, spit fire that’ll burn down an empire

Hopefully this motivation carries over to the last portion of the album.

10. Black Widow
Featuring Rita Ora; Produced by Stargate
Well what do you know, we get a song with an actual concept! HALLELUJAH! Actually its not even a fully developed concept as Iggy doesn’t address it in her portion of the song, rather Rita Ora establishes it in the hook. Iggy is a jaded lover who refuses to let her man leave, instead choosing to suffocate him instead until he can’t take it anymore. Again, nothing dazzlingly lyrically, and the beat is nothing to write home about, but just the fact we drop the over materialistic bars is a nice change of pace.

11. Lady Patra
Featuring Movado; Produced by The Invisible Men & The Arcade
To me this is the first time that the production is downright awful. It’s supposed to be dancehall inspired, but instead we get some chintzy, screeching electro/house mess. Iggy makes a few Jaimacan references and Movado comes in for over half the song, but this one is unbearable. SKIP.

12. Fuck Love
Produced by The Invisible Men & The Arcade
We get a fast paced and busy beat to close out the album. You would think that a classic album would close with something meaningful, but no, we’re not treated to that luxury. Unless you happen to find the phrase “fuck love, gimme diamonds” to be particularly profound. Thankfully once this song ended the album was over as well.

Bottom Line:
If you took the time to read the entire review you don’t need this portion of the article to know I did not like this album. Honestly, I stopped liking the project after the second song. The sad thing is that I really enjoy the Iggy’s voice and flow. She is a competent rapper and has a voice that’s interesting and commanding.

However, although Azalea has the technical skills to be a good rapper, she has no understanding of what it takes to produce quality music. This is where arguments of ingenuity and cultural appropriation gain traction. It really feels like Azalea went into a room and said, “Other people rap about money, I will to”. The album comes off as robotic and lifeless. It’s one thing to be flashy, but for the most part it just sounds like Iggy found a way to make a bunch of designer rhymes.

I’ve found near dry puddles with more depth than this album. I’m not saying that every rap song needs to be an audio dissertation, but this assaults the senses. This isn’t even good escape music. This is a bad album that requires you to completely turn off your brain to stomach it’s shallowness. Trust me folks, it’s not worth it.