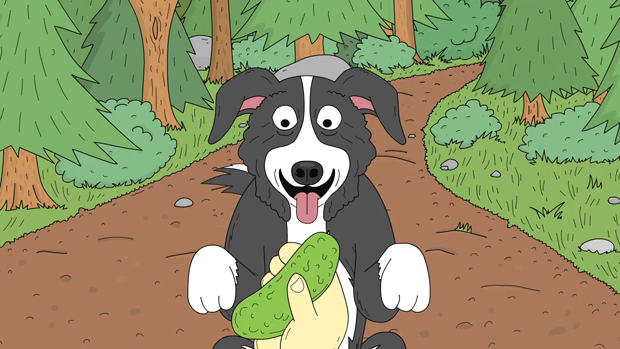 It’s been a while since I actually put something up for Friday Night ‘Fro. Remember when we broke The Strange Thing About The Johnsons some years back? Good times.

Well, here goes so more strange shit in animation form titled Mr. Pickles. Supposedly it’s a pilot created for Adult Swim with a full series coming fall 2014. It’s also been described as “One of the most hilariously disturbing 11 minutes 29 seconds ever to exist in animated form”.

In Mr. Pickles, the urban sprawl of modern society pollutes the old-fashioned town where the Goodman family lives with their lovable pet dog, Mr. Pickles, a deviant border collie with a secret satanic streak.

Mr. Pickles apparently aired on Adult Swim six months back and even though I watch Adult Swim a lot, I apparently missed it. It’s twisted as shit but it’s at least worth a one time viewing. And with a channel that airs shows like Superjail (Which I love), Mr. Pickles will fit right in. Check it out below.