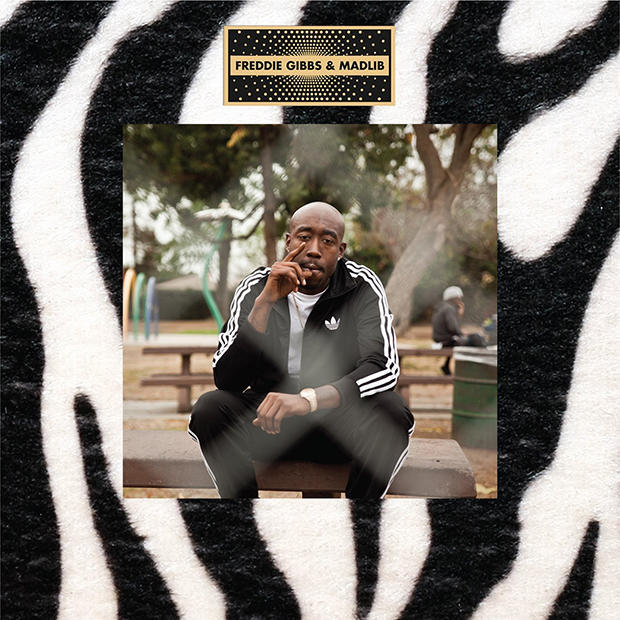 After a few years of waiting, we finally get the collaboration album from Madlib & Freddie Gibbs: Piñata. We got a few songs and a couple of EP’s from the duo in the past, but can a crate-digging cult hero of underground Hip-Hop and a gangster street lyricist from Gary Indiana really make a full length album? Let’s find out.

Note: All tracks are produced by Madlib

1. Supplier
Madlib is great at sampling dusty records, breakbeats, and movie clips. That’s what we get here. It’s quick at under a minute but it sets things up. I guess it could be looked at as an intro from the producer.

You know those songs that have you making a ugly face? Because it’s so hard? On “Scarface”, Gibbs start things off right on some gangster shit and the ugly face is just something that comes with it. It a quick verse of a hard loop that basically sums the chemistry between Gibbs & Madlib..

3. Deeper
You won’t get too many songs from Freddie Gibbs about crying over a woman and you don’t really get that here, but “Deeper” is as close as you gonna get. The story is about an old girlfriend that used to love Gibbs for his thug ways but changes up and starts dating a dude on the straight and narrow. Freddie shows his talent by making it an actual story that sounds really believable. The production samples violins and matches the tone of the track. Deep.

4. High
Featuring Danny Brown
Danny Brown & Freddie Gibbs are two of my favorites rapping today. Both are talented but it seems like every time the hook up on a song, Gibbs destroys Danny Brown (Danny has even admitted to this). You’ll also notice the sample, Freda Payne’s “I Get High (On Your Memory)”; it’s the one Styles P made famous with “Good Times (I Get High)”. It’s not a bad song but at this point, a song about weed using this sample seems lazy.

5. Harold’s
Named after the legendary chicken spot on the South Side of Chicago, Gibbs talks about an assortment of topics on “Harold’s” (besides giving out his favorite order on the hook: “A skinny nigga/Six Wing Mild Sauce/With all the fries you can give me/I tear them bitches off”). Most of these topics deal with robbing people and reminiscing about smashing high school chicks in the backseat, but it all sounds good over Madlib’s mellow productions. And on a personal note: I now think of this song when I go to Zaxby’s.

6. Bomb
Featuring Raekwon
It may be mandatory for all upcoming dope dealing rappers to do a song with Raekwon. That’s not a slight at The Chef but he does make a lot of appearances (Same goes for Jadakiss). It’s all starts off slow but when the actual beat kicks in, the results are pretty good. Both rappers turn in good verses over production that seems like it would be on a Raekwon album. It all works out.

7. Shitsville
The production on “Shitsville” sounds like something that might be playing in a scene from the movie Scarface but sped up with drums added. And I love it. The subject is different as it’s Freddie talking about the struggles of everyday real life of selling drugs and the problems of just living life. You could also say he takes to tasks other rappers who act like shit is all sweet:

Welcome to Shitsvile everyone. Population: All of us.

8. Thuggin’
Okay, let me preface this song by saying it’s one of my favorite songs of all time. OF. ALL. TIME. Classic shit. I know I already spoke about good examples of Freddie Gibbs & Madlib’s chemistry, but “Thuggin'” is the perfect example of that. Great beat by Madlib and Freddie rapping like a motherfucker over it. If you haven’t heard the song, stop reading this and do yourself a favor and go check it out here. I’ll wait.

9. Real
Uh oh. Gibbs gets at his former label boss Young Jeezy. I’ve said this before, but this works because I like diss songs that sound like facts are being stated. Not just “you gay” or “I’ll shoot you”; just facts. This is what Gibbs does here. On the first verse he fire shots in general and then the beat changes and he goes in:

Just a whole lot of rapping, but no motherfucking action
Seen Gucci by himself while we was 30 deep at Magic
And you didn’t bust a grape, was shook from the gate
It make it seem to me the gangsta shit you kick be fake
Cause all my enemies, I put them suckers in their place
So take them shades up of your eyes, and look me in my fucking face

Even though this is gangster shit, this is what Hip-Hop is about. Jeezy isn’t the dope dealing rapper he was when Trap Or Die came out. He’s rich now and may be so far removed from that life he can barely relate to that life let alone rap about it. Freddie on the other hand is fresh off the street, can rap, and is hungry as shit. We’ve seen this before in Hip-Hop history.

The only slight problem I see about this song is that it might be too “underground” sounding for to really do damage on a big scale. Then again, I could be wrong. Good diss song either way. Also: “Real” = “Remember Everybody Ain’t Loyal”.

10. Uno
Just as with a lot of the songs on the album, “Uno” is under 3 minutes but it gets it’s point across. Over an uptempo beat, Gibbs talks about bringing realness to rap as well as giving props to the likes of Big Pun & Big L while at the same time “wishing DMX had never hit the pipe”. He also sends a quick passing shot a Lil’ Wayne (“Judge a man by his character and not by his wealth/ A real G, I never kissed niggas or shot myself”). This could be looked at as a track to flesh out the album but it’s just a good song period.

11. Robes
Featuring Domo Genesis & Earl Sweatshirt
This is happening more often these days, but I like when rappers of :sub-genre” do songs and mix with no issues. That’s what we got here when Odd Future’s Domo Genesis & Earl Sweatshirt hook up with Freddie Gibbs. Over a mellow beat based off a sample from Sweet Dreamer by Lenny White, the threesome meshed pretty damn well. Gibbs gets the edge if we’re talking about who had the beat verse here (“Breakin’ down the Keisha gettin’ Brandon Marshall for the quad”) but he also sings part of The Deele’s “Two Occasions”. So there’s that.

12. Broken
Featuring Scarface
This isn’t really going out on a limb but I’m pretty sure Scarface was an influence on Freddie Gibbs. So it’s cool to hear both rappers on the same track. Freddie raps about his early life and how it was crazy doing crimes with his father being a police officer (Something I didn’t know before hand). Scarface raps about the tough life on the streets and reason for turning to crime. This is backed by soulful production and that helps tie it all together.

13. Lakers
Featuring Ab-Soul & Polyester the Saint
As much as Freddie loves his hometown of Gary, Indiana, he makes a song that is a tribute to L.A. (Apparently he lives out there now). I guess this also makes since because Madlib is also from California. The song gives loves to women, weed, weather, and hoods of the city. To be honest, it seems more enduring when somebody makes a song about a place they’re not from. Ab-Soul also makes an appearance and he drops a really good verse too (“California love, California dreaming/I’ve seen lost angels, I even found demons”).

14. Knicks
Since the last song was called “Lakers” and was a song giving props to California, I assumed that this song, “Knicks”, would be about New York. But that’s not the case. The actual song is creative as he uses the Knicks as a timestamp for each verse which are also thoughts about how time goes on but you find yourself in the same shit. 1st verse: First verse: “I’m watching Jordan drop a double nickel on the Knicks”/Second verse: “Watching LeBron put a 56 on the Knicks”. It’s good but I guess it’s one of those ‘listen for yourself things’. Shout out to Carmelo.

15. Shame
Featuring BJ The Chicago Kid
Another song for the woman folk. Well, not really. Freddie just wants to convey the before fucks a chick, he’ll let her know he doesn’t want a relationship so that when she leaves after sex, she shouldn’t do the walk of shame with her head down. And that’s basically it. On the production side, Madlib did this great thing where he makes BJ The Chicago Kid sound like a sample. It’s pretty well done and fits well in the beat. Good stuff.

16. Watts
Featuring Big Time Watts
This is an interlude that features a voicemail from Freddie Gibbs’s drunk and hilarious uncle Greg aka Big Time Watts.

17. Piñata
Featuring Domo Genesis, G-Wiz, Casey Veggies, Sulaiman, Meechy Darko, & Mac Miller
In my mind, I picture that all the rappers on the song were all in the studio and somebody suggested they all make a song. The results were this. It’s basically a cypher over a sample from New York City’s “Hang Your Head in Shame” (Made popular from Junior Mafia’s “Biggie”). Nothing wrong with that but it feels like they could have ended the album a little stronger. Good mix of talent though.

Bottom Line:
Freddie Gibbs dropped his official debut studio album last year with E$GN. I didn’t review it because as much as I’m a fan, I didn’t like it that much. My feelings on Piñata are almost the complete opposite. Not only is it proof that some odd pairings in Hip-Hop actually do work, it’s also a great showcase for the talents of both artists involved.

I’ve always like when different styles of Hip-Hop come together. Gibbs and Madlib have different audiences but both in their own way are true Hip-Hop heads. That’s why this album works so well. There are a few spots here and there that keep it from classic status, but it’s a great listen to anybody that just loves good Hip-Hop music.