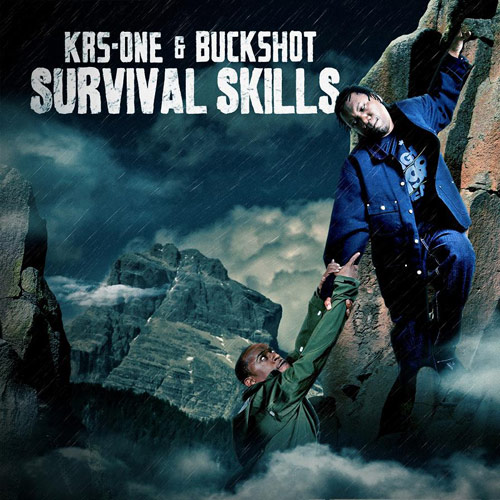 Typically, when we think of Pro Black, prideful, conscious rap, KRS-One tends to triumphantly erupt from our souls as the poster child and is highly regarded as a top 5 emcee…probably more like top 3. It doesn’t take much effort or digging to get into a conversation about this man or his greatness. Buckshot’s name may not have the same resounding name recognition for someone who isn’t heavy into the game. It’s not because he’s not an ill emcee, but the byproduct of being a part of such lyrical assassin groups as Black Moon and the Boot Camp Clik. While grinding on the underground scene, those that are familiar with his work were ready to celebrate when they heard that these two verbal samurais were working on this project together.

1. Survival Skills
Featuring DJ Revolution; Produced by Illmind
If this is the tone for the album, I’m ready to be excited. This isn’t about glossy production and bounce, this is about returning to bass, beat, and intensity. Now, I’m sure we may get some polish and pretty effects later, but this one comes off like one of the hard hitting NY throwbacks. You also get a taste of what could be ahead with Blastmaster working this track and his flow to his advantage and Buckshot Shorty playing the Geeche Suede to his Sonny Cheeba with a smooth sound and style that works with KRS brash lyricism. The hook throws me a little, but the lyrics and track are too fly to ignore…shout out to some old school scratching.

2. Robot
Produced by Havoc
This is the lead single for the album and I can’t even pretend to like the melody of the hook. The message is one that I’m sure we will hear a lot more of in the near future (and I welcome that). Havoc keeps the theme feeling from the first track as our duo do a job of blending and not competing while both offering some of the illest commentary on the current state of the industry.

3. The Way I Live
Featuring Mary J. Blige; Produced by Black Milk
Anthem, period. The production on this joint is fantastic and Mary J. proves again that she’s one of the best to do this Hip-Hop hook thing. KRS literally destroys this song with his insightful lyrics and inspiring flow. Hell, this may be my new alarm in the morning. This is one of the best songs I’ve heard this year. If this one doesn’t make radio, all the execs need to be fired. Sometimes, things are ready for the radio because they NEED to be heard, not because they are designed to be played on the air.

4. Clean Up Crew
Featuring Rock (of Heltah Skeltah); Produced by Illmind
The track is cool, still hard hitting, but something about this one doesn’t really grab me. Lyrically, it’s ok. The concept is pretty straight forward, as you see the title, but it comes off overdone to me. Like, the analogy of cleaning, cleaning supplies, janitors, etc, gets a little boring to me after a while. It’s creative and I get it…but yeah. You’ve got to hear it, I guess the best way for me to say it is that it’s creative, but not as clever as I’d expect or hope for.

5. Oh Really
Featuring Talib Kweli & Geo (of Blue Scholars); Produced by Marco Polo
Talib! Oh shit, I’m ready…for him to only be on the chorus? Yeah, that’s all we get. Hey, I was hoping he was going to do his thing. Again, a tough track that plays the proper role and lays the foundation for offerings like this one from KRS, “I’m naughty by nature/raunchy by nature/forty by nature/y’all corny by nature/meanin’ all y’all naturally wack/and I’m naturally dope like coke before crack/but really, I’m more like the weed in this rap/and these new jacks are more like the seeds in this rap”.

6. Connection
Featuring Smif-n-Wessun; Produced by Moss
We still get grit on this one, but with a healthy dose of dark ominous chords in the background. This song is one of the missteps on the album for me. The song becomes boring and at 5:23 seconds, it’s too long to sound like this. The one thing I will mention is KRS line at the end of the song…damn…damn meaning GOOD!

7. Runnin’ Away
Featuring Immortal Technique; Produced by Black Milk
I hate to be lazy or come off like I’m on some bullshit, but Immortal Technique did some unmentionable shit to this song. Really, I don’t even want to cloud your this song review with talk about the other shit, Immortals offering wore the paint off my rewind. Just take a listen at the bottom.

8. Think Of All the Things
Featuring K’naan; Produced by DJ Mentplus
There are certain things you all know about me at that I need in albums. I don’t pretend to be the almighty scholar on all things Hip-Hop, and I Will Not Apologize for how I evaluate albums. You all know that I am a stickler for lyrics, beats, hooks, production and flow of an album. I LOVE this song…aside from KRS singing. The message is fantastic, but I have trouble with it on this album or at least hear. It just seems odd right here and now.

9. One Shot
Featuring Pharoahe Monche; Produced by Nottz
This beat drives me crazy, and not in a good way. It’s set on the down beat so you can’t really nod where you’re used to nodding…you’ll get it when you hear it. It’s not as jarring with further listens but it has yet to resonate with me. Monche is another of of those guys that doesn’t get the notoriety that he deserves in the business but unfortunately, I can’t say that he offered anything to change that. He’s only on the chorus. I do like the structure of this song and the lyrics offered as well.

10.Amazin‘
Featuring Sean Price & Loudsmouf Choir; Produced by Khrysis
Y’all know about the love the Fro’ has for the Justus League, so shout out to Khrysis right out the gate. I should probably listen to this again and count how many times they say amazing since that is the concept of the song…but oddly enough, it doesn’t get old. I’ve never heard one word sound like so many different words as I do with KRS stressing different portions of the word and the words before and after it. Buckshot continues to prove that this album is collaboration and not a competition as he lends a different sound but flow that is second to none.

11. Hear No Evil
Produced by Khrysis
Definitely a different sound on this track. Appropriately I feel like the resounding, rejoicing, triumphant horns are recruited to play at the name and theme of the song. This song is good, the track stands out on this one though.

12. Murder 1
Featuring Bounty Killer; Produced by Coptic
Another decent song, another song that doesn’t really flow with the album. Bounty is relegated to the hook and not intermingled enough to get this one over for me.

13. We Made It
Featuring Slug (of Atmosphere); Produced by Illmind
The thing that I think is most important to note about this song is how differently each emcee approaches the topic of “made it.” KRS comes with a story of life from seed to success, Slug speaks about his personal struggles and triumph in life, and Buck speaks about his motivation to be successful and make it. This is a really good song for any aspiring rappers to check out.

14. Past, Present, Future
Featuring Melanie Fiona & Naledge (of Kidz in the Hall) ; Produced by 9th Wonder
Miss Fiona will be dropping her album next week and if her vocals on this one are any indication, if you like the feel of Amel Larrieux silky voice, we need to be on the lookout. 9th Wonder is on his shit as usual, and just like most of the previous 13 tracks, lyrically, this song is really good. It’s good to see Naledge getting some shine as well.

Bottom Line:
This album is feature heavy, but that is a bit misleading. With three of the features just being on the chorus (when both of them should have been spitting) and the rest doing a pretty good job of blending with the album, it doesn’t come off as feature heavy as it is…if that makes sense. This album seems to get looser as it drones on and a lot of the grit and grime gets polished and cleaned up by track 14. There are hiccups which I attribute more to my own ideas and what I want rather than them being bad tracks. The lyricism on this album is really dope and inspiring as well is the structure of some of the songs. In a industry that tends to go with verse, hook, verse, hook format, this team offers some different set ups and interesting collaboration and subject matter throughout. All in all, this album is probably going to be a must have for those that love either KRS or Buck, but I don’t know that it will win any new fans or make a big commercial splash. To that matter, I haven’t decided if that’s more a commentary on the state of music or about our desire/disdain for hearing things that are different to what we like…or maybe just me.