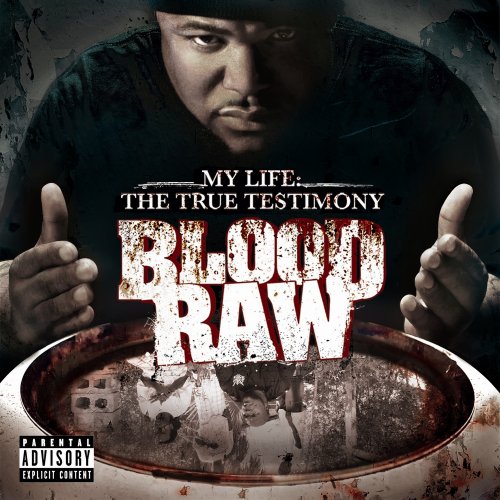 After the explosion of his boss/rhyme partner Young Jeezy back in 2005, Blood Raw and the CTE label had big things on the horizon. But after killing the mixtape circuit and appearing on the USDA album, Blood Raw’s time is now. Piggybacking Jeezy’s career is one thing but making it on his own is another. But Raw is up to the test and now is the time to show the world that he’s ready.

I’m the Truth
Featuring Big Rube; Produced by P-No
Raw starts the album off with the story of his life and how he got where he is now. Good way to start the album off, but what’s even more impressive is Big Rube doing his thing on the track.

It Feels Good
Produced by Drumma Boy
Raw talks about how it used to be back in his hood. It has a nice beat on it, but it sounds like what he said in the first song.

Louie
Featuring Young Jeezy; Produced by Midnight Black
The lead single off the album talking about men with their manpurses! I can’t imagine how they think it’s cool for men to walk around with MANBAGS! Nah, I don’t like this song…SKIP!

Almost There
Featuring Mannie Fresh; Produced by Mannie Fresh
Mannie Fresh lends a hand on the song, which is kind of funny with the message, “I’m trying to get my money right, I’m almost there” you know the feeling. The song will grow on you after a while.

What’s Happening
Featuring Trina; Produced by DJ Nasty & LVM
Trina helps Raw out with the ladies on this cut, but he sounds like Jeezy on this song. It could be a single because Trina’s verse wasn’t that obscene.

Fuck You
Featuring Slick Pulla; Produced by Tony Rey & Cliff Brown
Label mate Slick Pulla joins in on this track, the production, lazy hook, and Raw’s rhymes don’t hit you from the jump and Pulla’s rhymes doesn’t grab you like they used to. FREE SLICK PULLA!

Tryin’ To Get Home
Featuring Lyfe Jennings; Produced by T.A.
After hearing the production I thought Raw would do more with it, but he didn’t. He sounds like he’s saying the same thing on every track. SKIP!

I’m Fly
Produced by DJ Nasty & LVM
This sounds like a song that Jeezy passed on, but Raw gives the song its due. Nothing interesting about the song, it’s just some filler to make it an album.

Get Away
Produced by J.U.S.T.I.C.E. League
One thing you can’t say is that Raw doesn’t have some of the biggest producers in the game on his album. The downside is the fact that Raw’s subject matter doesn’t match the production on the song. I would listen to the song just for the beat though.

News Reporter
Performed By Torica
An intro to the next song.

Go Head
Produced by Midnight Black
It sounds like he’s whining on the track and it gets annoying quickly! SKIP!

Still A D-Boy
Produced by Megaman
About time that he gave the people what they wanted to hear from him. When you rap with Jeezy all you’re supposed to rap about is TRAPPING! He went to that and it worked for him on this track.

I Miss You
Produced by The Runners
Raw looks back on his life and lets all his loved ones that are no longer here know that they are missed. The song isn’t HOT, but it’s okay. I have to say that The Runners dropped a dud on the production side.

Bottom Line:
Raw has successfully released his debut album, but it will get lost in the shuffle with all the other titles out there. He didn’t do anything to separate his music from the next guy. I didn’t think he could hold my attention for a whole album and he proved me right. He does have some of the top beatsmiths in the game on the album, but he wasn’t able to deliver with what he was given. What’s next for B. Rawstein? Who knows, but he might be better off being Jeezy’s goon than the future of CTE.