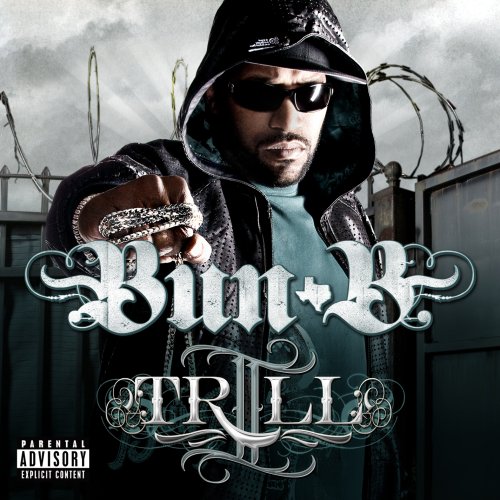 The passing of Pimp C came at a time when UGK was finally getting the mainstream recognition they deserve. Bun B spent a good amount of time making guest spots and keeping the name of UGK relevant in the minds of us older Hip-Hop heads and piquing the interest of the newer kids as well while waiting for Pimp C to be freed. Bun already had one solo joint, and he is back now with II Trill. How is it? Let’s find out.

II Trill
Featuring Z-Ro and J. Prince; Produced by Clinton Sparks
This is a hard ass first song for an album. Bun B is not bullshittin’ on this banger at all. The hook is bad, really bad though. It sounds like it wasn’t mastered right and sounds like it was just put on the track without consideration for the sound of the entire song.

That’s Gangsta
Featuring Sean Kingston; Produced by J.R. Rotem
Wanna know what it takes? Bun B FINALLY defines the bullshit that folks have been erroneous spouting lately about how they are “gangsta” and what “gangsta” is. It’s a lot of fakers out there and Bun B gives you the parameters so you can spot one. Now, having’ Kingston singing the hook? That’s not gangsta. The track is UGK though, you know how that goes.

Damn I’m Cold
Featuring Lil’ Wayne; Produced by CHOPS
I would NEVER have thought I’d see this one, but then again, Weezy is on everyone’s track so I guess it was just a matter of time. CHOPS serves us up with some classic UGK type shit that Weezy actually dedicates himself to more than he has most of his other collabs. “Y’all niggas 2 weak like 14 days.” Damn. Ha!. The scary part is Bun flips it a lil’ harder too, makes this song insane. We may have a problem on our hands.

You’re Everything
Featuring Rick Ross, David Banner, 8Ball &MJG; Produced by Mr. Lee
Well shit. Talk about a line-up. We also get a sample of Jodeci as the hook. I would have liked a better track for this one. It’s not bad, but just kinda brings it down a lil, in my opinion. Banner comes in and kills the shit. The way he slides in off Ross and then leads into the hook, dope shit. The magic of this song is how each rapper rides this shit in their style and makes it sound like a different beat with each flow. Insane. I don’t like how it just cut off and goes to the next song, but, that may be just me.

I Luv That
Produced by Scott Storch
I won’t front or hold any punches. I don’t like Scott Storch music overall. I also don’t like Bun B over a commercial type club song either. Sadly…this one is a hit, watch.

Swang On Em
Featuring Lupe Fiasco; Produced by Enigma
Introducing, the bounce. Enigma gives us a nice ass track featuring some ill woodwinds and even some xylophone. I would like to introduce HBCU students to the song that WILL be done at your battle of the bands. Lupe does Lupe and makes this a dope ass track. This shit is absolutely insane in the whip.

My Block
Featuring & Produced by Jazzy Pha
Jazzy did his thing. The track is insane and the hook is bananas. Its off-key but it works so well. We get some drama with the horns and Bun B brings his shit on this shit like no other. “Hold it down lil’ buddy, pump ya breaks, slow ya roll/Ease back on ya’ throttle put ya plans on hold/I don’t care what you sellin’ or care what’cha sold/I don’t know what they was tellin’ or what you been told.” Can you feel it? That’s the fuckin’ intro. It’s about to go down.

Get Cha Issue
Produced by Big Tyme & Qwest
Some blues infusion with this track along with some clapping. It’s hard to listen to this track though. Something about the way it was done makes it sound old and not up to the sound quality of the rest of the album. Outside of that, Bun B is givin’ us real ass talk. Gotta hear this shit.

Pop It 4 Pimp
Featuring Webbie & Juvenile; Produced by Mouse
I am putting all clubs and strippers on notice. You will get what I mean when you hear it. It’s a club jam and will bang out the clubs this summer, and guys, your favorite stripper will be using this.

Good II Me
Featuring Mya; Produced by Big Tyme, Intl Red, & Bun B
Hello radio, this song is called “Good II Me” and features a popular billboard sample from the golden days of music coupled with an industry queen, Mya. Folks, it ain’t hard, this song is just like it looks. A song for the ladies, Mya on the hook, and a radio ready song indeed…and some ill ass guitar work as well.

Underground Thang
Featuring Chamillionaire & Pimp C; Produced by Cory MO
Something about Cham singing the hook makes it sound like his track. I don’t know if that’s good or bad, but it is predictable as hell. Sounds like any other Cham hook. We get some Pimp C flossin’ and verb tossin’ like only he can. I miss that dudes flow on this album. The song itself, dope.

If I Die II Nite
Featuring Lyfe Jennings and Young Buck; Produced by J-Roc
Finally, someone called the REAL Lyfe Jennings for a hook. Young Buck is quietly one of the better rappers out and he keeps it G on this song as well. The song is about regret, the past, and reconciliation. It’s one of the realest songs on the album.

Another Soldier
Featuring Middl Fngz & Cobe; Produced by DJ Khalil
The scene is set by a quick intro/poem that lets you know the mood of the song. It doesn’t really work until the beat kicks in and then the words have ground. This is an anthem for yo’ ass. This song is audible courage at its best. I dare you to play this song in the whip and not feel like Nino Brown. Well placed guitar slashin’ in the background coupled with studio ignance’ from Bun, Fingz, and Cobe. When this one goes off, I was damn near upset.

If It Was Up To Me
Featuring Junior Reid; Produced by Blackout Movement
Bun B for president? Why not? He seems to state his case here voicing concerns about the everything including Katrina and Rita, lead based paint, repentance, education, state spending, environment and global warming, and yes, even more. It is dope to hear Bun B bring it on this song and Junior Reid doin’ his thing on the hook, but the track is kinda weak. It may be deliberate so that you can understand the song, but it’s almost TOO laid back. Lyrically, this song voices way too many concerns to try and pull out a part of, I don’t want to even do this song a disservice like that. I will tell you that this song is real as hell and is the kind of stuff we need on the radio. While folks are crying about Hip-Hop we have sincere songs like this that never get played.

Trill Talk
(intro to next song)

Angel In The Sky
Featuring Lil’ Razah; Produced by Cozmo
Yeah, it’s the tribute song. The track is perfect. A brilliant sample of “Ribbon In The Sky” by Stevie Wonder sets the tone and grove of this track. Look, I don’t know about you, but some songs don’t need to be critiqued. Listen to it.

Keep It 100
Produced by CHOPS
Hey fakers, listen up, this song is for you. “(100) all day and all night/Nigga ev’rytime you see me imma keep it Supatight/(100) Imma Underground King reppin’ UGK/That give a damn what muthafucka’ say imma keep it (100).” It’s physically impossible to play this song and not break yo’ damn neck. The track is undeniable and Mr. Kilogram, Mr. Woodgrain, Mr. Brick is killin’ this shit.

Bottom Line:
When I saw the list of artists appearing on the album, I was kinda conflicted. I am not a fan of extreme collabo albums unless that’s what it is marketed as, such as Hi-Tek or 9th Wonders albums. The other feeling was how can you go wrong with Rick Ross, David Banner, 8ball & MJG on a track with Bun B? Or Lupe? Or Weezy? The bottom line is yes, Bun B relies on the cameos a lot, maybe keep you from missing Pimp C’s voice on the tracks, but nonetheless, this shit is dope. Some albums give you cameos that are nothing more than a credit on the track, and then you have collabs where the guests actually bring it. The majority of the rappers on this album took this shit to heart and brought their A game to the table. There are very few low points on this album outside of the Storch track and the abrupt ending of songs. UGK lives, the mark they left resonates in the tracks of this album and each artists desire to bring that feel to it. The title is so real, this shit is II Trill.