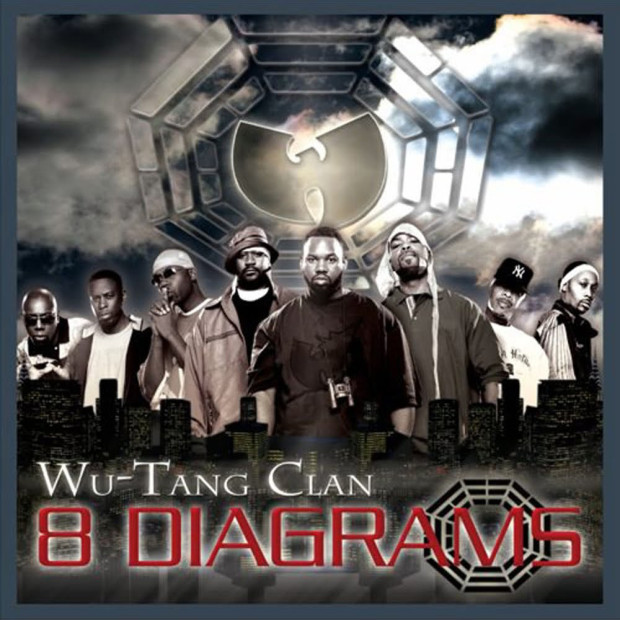 “Wu-Tang! Wu-Tang!” Yeah, the unthinkable has happened, Wu-Tang Clan has released another album. It’s been six years since Wu released an album and let’s be honest; the climate in Rap music has changed immensely. Even though the stats say Wu-Tang released five albums, shit ain’t been the same since 1997’s Wu-Tang Forever (Especially with the passing of Ol’ Dirty Bastard). With all that being said though, this may be the best time for a Wu-Tang album. We need an alternative from today’s “ringtone rap”; at least when Wu-Tang was running shit they had lyrics. So to all the people who went and got a Wu-Tang tattoo back in the late 90’s, this one is for you.

1. Campfire
Method Man & Ghostface Killah featuring Cappadonna; Produced by RZA
The album starts out like it suppose to be; with a Kung Fu flick sample. The beat hits and it sounds like vintage hard hitting Wu. All involved sound rejuvenated especially Method: “Spittin like a calico, kush from a Cali hoe/Tell that joker ‘tally ho’, put shots in that Denali yo/RZA you know how we go on them 20’s, that’s how we roll/And I don’t eat berries but eat a Berry like Halle though” Okay, now I’m excited.

2. Take It Back
Raekwon, Inspectah Deck, Ghostface Killah, U-God, & Method Man; Produced by Easy Mo Bee & RZA
The beat on this one reminds me of Ghostface’s “Daytona 500”. I don’t fault it for that though; I love that song. I like this song also even though the hook is suspect.

3. Get ‘Em Out Ya Way Pa
Method Man, U-God, Masta Killa, Raekwon, & Ghostface Killah; Produced by RZA
I think one problem I might have with this album is its cohesiveness. With this track, it sounds like the members weren’t in the same room when they recorded it. Besides that, I think the track is average at best. The beat is okay and reminds you of track 2. I’m also getting tired of U-God.

4. Rushing Elephants
Raekwon, GZA, RZA, & Master Killa; Produced by RZA
This reminds me of something that would have been on a Raekwon solo album. It’s good to hear RZA finally get on the mic too even though he still sometimes rhymes off beat. Yeah, I know what you saying out there, “But that’s his style”. Whatever. Not a bad track though with the horns and such.

5. Unpredictable
Inspectah Deck & RZA featuring Dexter Wiggles; Produced by RZA
For some reason, this sounds a little like the theme form Shaft. Don’t know why though. The hook on this one is awful and not that awful like I don’t get it either. Just bad.

6. The Heart Gently Weeps
Raekwon, Ghostface Killah, & Method Man feat. Erykah Badu; Produced by RZA & George Drakoulias
This is the first single off the album. I heard like three different versions and at first I really didn’t like either. But now I see that I just wasn’t used to hearing Wu-Tang Can like this with all the live instruments and all. The song kinda grew on me a bit now thanks to the Badu hook.

7. Wolves
U-God, Method Man, & Masta Killa featuring George Clinton; Produced by RZA
The paring of George Clinton and Wu-Tang is lost on me. The actually beat sounds like Wu; they just should have kept it without George Clinton. Not really feeling this one.

8. Gun Will Go
Raekwon, Method Man, & Masta Killa featuring Sunny Valentine; Produced by RZA
This track is more laid back than the ones before. Even though I once again don’t like the hook, the actual song is good. It’s your standard looped up style you expect from RZA.

9. Sunlight
RZA; Produced by RZA
The only solo track off the album. Personally, I don’t think there is room for a solo on this album when you have eight members. The track is average I guess; you might like it if you like RZA’s rhyme style.

10. Stick Me for My Riches
Method Man, Inspectah Deck, RZA, & GZA featuring Gerald Alston; Produced by Mathematics & RZA
I like they way that the beat changes up on this track. What’s up with all these wired ass hooks though? GZA makes an appearance here which is a good thing I guess.

11. Starter
GZA, Inspectah Deck, & U-God featuring Streetlife, Sunny Valentine, & Tash Mahogany; Produced by RZA
It’s always weird for me to hear the roughest looking members of Wu rapping about women. I don’t know if this track was a attempt for a radio; I hope not. If you in Wu-Tang and you wasn’t on “Ice Cream”, you shouldn’t be rapping about the ladies. Oh yeah, get Sunny Valentine off these songs please.

13. Weak Spot
RZA, Raekwon, & GZA; Produced by RZA & George Drakoulias
This one is more straight forward and right to the point. It incorporates more of the Kung Fu flick sampling too. Nice rugged beat and nice rhymes; what else could you ask for?

14. Life Changes
Method Man, Raekwon, GZA, Masta Killer, Inspectah Deck, U-God, & RZA; Produced by RZA
This track is a dedication to ODB. Clocking in at 7:21, everybody doesn’t get a lot of time but it’s still a nice eulogy and the Freda Payne sample here fits the mood. I still wish all the members would of got to rap (Ghostface is missing), but this is the most members you get on a song for this album. R.I.P. Dirty.

15. Tar Pit (Bonus Track)
U-God featuring Streetlife, Cappadonna, & George Clinton; Produced by RZA
I see why this is a bonus track. This sounds like it’s from U-God’s solo album…thats not a good thing. I’m sorry, back in the day I used to stick up for U-God but that nigga just be saying bullshit now. And why is George Clinton on this track too?

16. 16th Chamber (ODB Special) (Bonus Track)
Method Man & Ol’ Dirty Bastard; Produced by RZA
This sounds like it’s from a live performance or a DJ mix. Not a new track but you get to hear ODB.

Bottom Line:
Okay, I’ve been seeing a lot of great reviews for this album but honestly, I don’t hear it here. This is not a terrible album at all. But this is a an album from Wu-Tang; feel me? What I mean is that being that it’s Wu-Tang Clan, its got to be more than average. This is supposed to be the return of the Killer Bees. I understand why Ghostface and Raekwon had problems with this album coming out. It’s not at the level that they should be at. I know I gonna get grilled on this rating, but I was a big fan of Wu back in the day and this album ain’t giving me that feeling again. I guess I’ll just have to wait on the next album supposedly being put out by the Wu that doesn’t include RZA.