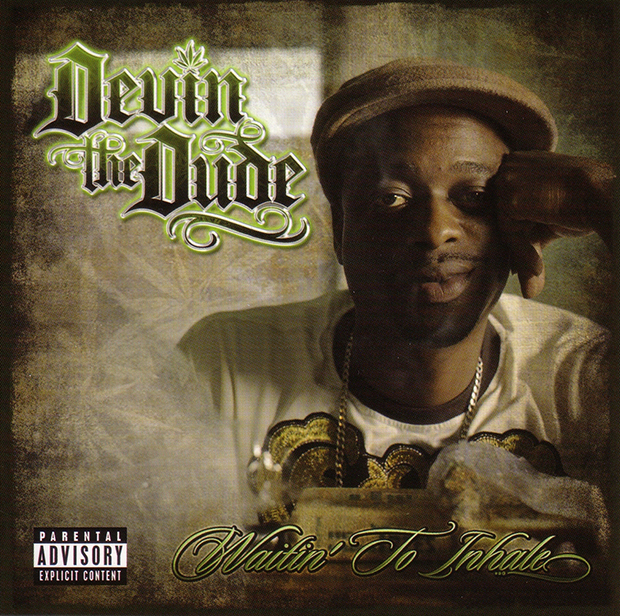 Devin the Dude has been making good music for a while. Even though he hasn’t had much mainstream success, he has put out seven albums (including group efforts with Facemob, Odd Squad, & Coughee Brothaz). Devin is probably most known for his guest spots on such albums like Dr. Dre’s 2001 & Jay-Z/R. Kelly’s The Best Of Both Worlds. The thing that makes Devin stand out is his light-hearted and comically self-deprecating style of music that also seems genuine. While he raps/sings mostly about drinking, smoking weed, and sexing women, he doesn’t glamorize it and it seems to be his personality. Well, once again Devin comes back with his new album, Waitin’ To Inhale.

The album starts out with “Boom I”, a funny skit that has Devin calling around town in his redneck persona asking various music stores do they have any “of that boom” for a track he is producing. You kinda have to hear it to understand. The interlude, as well it’s sequels later on the album, “Boom II” & ‘Boom III”, are short and funny. “She Want That Money” had a smooth yet funky beat featuring Odd Squad. It deals with girls acting like they like you, but still trying to sell you pussy. The Odd Squad is not like most back up crews and they carry they own weight on the track (On a “did you know” side note, Odd Squad member Rob Quest is blind). I could relate to songs like “Almighty Dolla” and “She Useta Be”. The first deals with being broke and how “hobos” ask for more than a dollar these days, and the latter talks about how years later your high school crush’s looks have dramatically dwindled. The refreshing “What A Job”, which features Snoop Dogg and Andre 3000, have the rappers being thankful to have their jobs. I was surprised to see Andre 3000 on Devin’s album as anybody. Bun-B and Lil’ Wayne both make superb appearances on the black girl lost themed “Lil’ Girl Gone”. Devin also deals heavily with relationships on this album with great success. “Broccoli & Cheese” deals with “wining and dining” a lady and not receiving any ass. “Just Because” has Devin explaining the violent (and funny) things that love makes one do. While “No Longer Needed Here” discusses what happens when your woman is fed up and tired of the relationship. Devin’s album, while good, is definitely not perfect and has a few missteps. “Don’t Wanna Be Alone” is not garbage, but is mediocre with its 70’s crooning. “Cutcha Up” has Devin lusting after an underage girl; while it may be true for a lot of guys, it can come across as creepy.

Bottom Line:
Waitin’ To Inhale is one of those albums that has a unified feel. While every song is not great, every song feels in place with the rest. Devin turns in an album that is soulful yet has a Hip-Hop feel. It may not be for everybody, but to me, it’s one of the best albums I heard so far this year.

nappy Picks: Devin needs the album sells. Help out a real Hip-Hop artist and go out and buy the album.