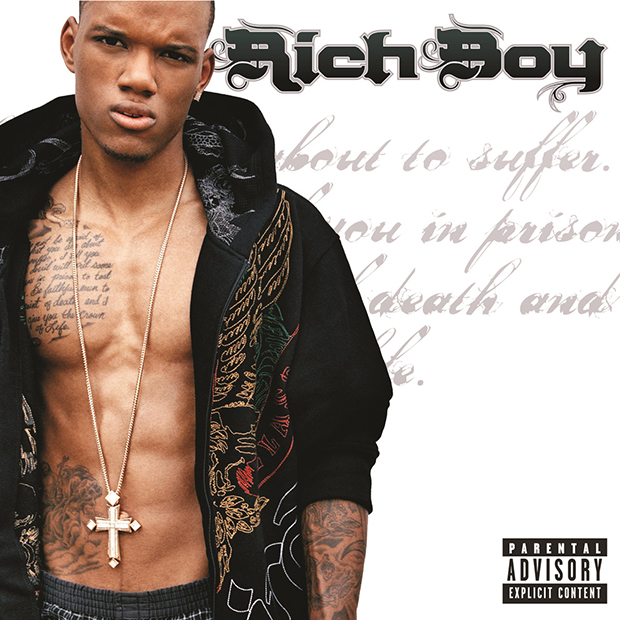 Coming straight out of Mobile Alabama, Rich Boy comes with his self titled debut. Now, of course you heard of Rich Boy from his hit single “Throw Some D’s” and you maybe heard the remix featuring Lil’ Jon, Andre 3000, Jim Jones, Nelly, Murphy Lee, & The Game. Personally, I’m trying not to peg Rich Boy as your everyday “I sell drugs, drive on dubs, and fuck bitches” rapper, but it’s hard. I really haven’t heard anything other that “Throw Some D’s”. But preconceptions aside, here we go.

One thing you gotta know about Rich Boy’s album is that is mostly produced by Polow Da Don (formerly of the Atlanta group Jim Crow). To be real about it, they make a good team. It makes the album sound like a solid idea, instead of like most albums today sound with twenty different producers (Polow produced 9 out of 16 tracks on the album). The album starts out with “The Madness”. He introduces us into his world with lines like: “Sweet home Alabama, yea I love her, I still try to hug even though she ain’t my color.” It serves it purpose as being the album starter. David Banner stops by with a quick hook on “Role Models”. The beat above average and rapper Attitude turns in a good verse, but the song barely covers the title. “Boy Looka Here” is the second single from the album. The beat is hard on this one but the hook is repetitive. “What It Do” is produced by Lil’ Jon and it shows that the “King of Crunk” days as a top producer are over. The song even uses the tired hook “Can I get telephone number baby?”; real original. “Good Things” featuring Polow Da Don & Keri Hilson has Rich Boy going at the ladies (I could of guess by that album cover.). The song doesn’t really do anything new in that department and has Rich sometimes sounding out of place. I could have sworn Timbaland produced “Hustla Ball Gangsta Mack”. The song’s producer Brian Kidd turns in the best Timbo beat impression I heard in a while. I hate the say it, but it is still one of the best beats on the album (not to take away from Polow Da Don). On “Touch That Ass”, Snoop says a few words in the beginning and that’s it (huh?). This song had Rich Boy talking dirty to strippers and hoes alike in a whisper voice like David Banner and Ying Yang. It has a Neptune feel and it nicely breaks up the rough and tough sound of the album. “On The Regular” is another song getting at the ladies. Again Rich Boy? Yea, I’m really not buying Rich Boy as a ladies man either. I don’t mind a rapper doing this sometimes, but can you at least hide the fact that you’re trying to get album sales. Needlz turns in a great G-Unit beat with “Gangsta”. It features Mark Twain and is around two minutes, so they call it an interlude. “Get To Poppin’” has a Indian/Spanish hook like on Truth Hurts’ “Addictive”. The beat is a good try to have Rich rap on something different but Rich Boy country twang doesn’t fit. “And I Love You” is a good anthem for dope boys everywhere (I guess, they really don’t stay on subject). It features Pastor Troy and Big Boi both sounding like they’re old selves with Boi even quoting “Dirty South”. “Lost Girls” has Rich Boy rapping to a reggae beat…and the results are terrible. John Legend makes a surprise appearance on “Ghetto Rich”. It’s not a bad song. Just you average, “God why we have to live like this in the ghetto” song that at the end of most rappers album. I feel him but damn, too much of that shit over the years makes a brother jaded. “Let’s Get This Paper” is a well made song about the traps of drug dealing. On closer listen, it has Mase and Bone Crusher on the hook telling the youth not to go that route. Of course the album also has “Throw Some D’s” as well as its remix, which is a good look when you have an elusive Andre 3000 remix actually on your album.

Bottom Line:
Rich Boy is not going to hit you over the head with lyrics or even concepts. The album themes of drug dealing, balling, hustling, and bitches are monotonous within today’s rap landscape. But when teamed up with Polow Da Don, they still make a formidable duo. If your tired of the same machismo from Hip-Hop, this album might not be for you. If you just want to hear nice beats and really don’t give a fuck about messages, you are probably one of the people who made the album debut at #3 on the Billboards.