Little Brother – …And Justus For All [Review] 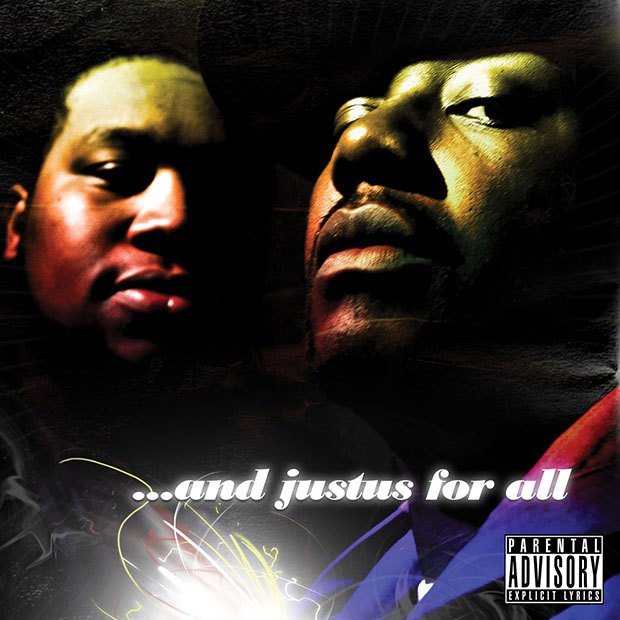 Poor Little Brother, will you ever get to shine. Well, it isn’t that bad for the North Carolina trio…uh duo. Let’s do a brief history: Little Brother started out with two rappers (Big Pooh and Phonte) and a producer (9th Wonder). Little Brother’s first album The Listening came out in 2003 on indie label ABB Records to much critical acclaim but little commercial success (it even received a “Hip-Hop Quotable” in The Source). They then signed to a major, Atlantic Records, and released The Minstrel Show in 2005 to once again receive critical success but push 18,000 in first week sales (BET even refused to play the group’s video for their first single “Lovin’ It” because it was “too intelligent”). In between all of this they also dropped other minor projects like The Chittlin’ Circuit 1.5 (2005 retail mixtape) and The Commercial Free EP (2006 live album) as well as other side projects by the group’s individual members (9th Wonder has worked with artists like Jay-Z and Destiny’s Child)). Then, finally a ray of hope came in the form of DJ Drama’s Gangsta Grillz series. Little Brother and Drama team up to produced the mixtape, Little Brother best received work, Separate But Equal. Okay, now that that’s out the way, Little Brother returns (minus 9th Wonder) to bring to you the mixtape, And Justus for All (with DJ Mick Boogie).Oh yea, they giving this one out for free too people.How does the group hold up as duo? How good is a free internet mixtape? Let’s find out:

INTRO (POOBIE’S SONG) (feat. Big Pooh)
Big Pooh starts of the mixtape rapping over Jay-Z’s “Hova Song”. Being the big Jigga fan that I am, you know I gotta be hard on him but he does okay. We also gets to here from DJ Drama via phone which is good because I was wondering what his next movie was anyway.

CAN’T STOP US (feat. Chaundon)
Even though 9th Wonder didn’t produce this beat, it still sounds like it. It samples Marvin Gaye’s “I Want You”. Phonte wins on this one with lines like; “The number one, assassinator of lame ducks, Phone-Tigger got the game tucked like a comber bun”. Traditional Little Brother song.

THE PURPOSE OF MIXTAPES (Interlude)

LIFE OF THE PARTY (REMIX) (feat. Skillz)
Skillz takes a break from doing yearly wrap-ups to drop a verse. The song is actually funny with lines like; “Girl what you mean you don’t recognize me? I’m only the biggest rap star in your apartment complex.” The beat ain’t bad either.

BEST KEPT SECRET (feat. Legacy)
Okay, I’m starting to realize that Little Brother brought their whole crew for this mixtape. There is a feature on almost every song. With that said, Legacy does come out swinging with the first verse. This is a “let’s all take turns spitting fire” type of song, but it works.

WACK FREESTYLES (Interlude)
Little Brother asks rappers the question: Why freestyle over the same beats everybody else freestyles over?

DO IT TO DEATH (feat. Rhymefest & Supastition)
Back from wherever rappers disappear to when their album flops horribly, Rhymefest drops in. Actually, Ryhmefest drops a decent verse but Phonte steals the show again with; “When LB hit the shelves, ya’ll niggas is assed out like Chippendales, not Rescue Rangers, we don’t rescues strangers”.

A WORD FROM OUR SPONSORS (feat. Phonte & Von Pea)
Okay, on this song they are starting to sound like dudes on the street I might hear in any Northern state. They just rapping bars with no focus; just to put words together. This is only okay for so long. The beat is alright though (and on further listen, the rhymes are not bad either).

LAST DAY (feat. Phonte)
This is probably my favorite song on the album. It’s just Phonte rapping (over Onyx’s “Last Days”) about his last days working at a department store. What’s great about this is that the story is witty and relatable. This is what Hip-Hop needs right now. Can 50 Cent rap comfortably about something other than drugs, sex, and violence. What about Cam’ron? This is a good song to listen to for lyrics and creativity.

NEVER LEAVE
Finally, a Little Brother song with just Little Brother on it. It’s their take on a street song but it’s not what you think. It might take a few listens for the slow minded but check it out.

BRING IT ON (feat. Big Pooh & Ray Cash)
Cleveland’s Ray Cash stops by to get with Big Pooh over Jay-Z’s “Bring It On”. Is it bad? No. Does it measure up to the original? Hell no. Still not a bad song though.

WITHOUT YOU (feat. Big Pooh, Bishop Lamont, & Jozeemo)
This is my first time hearing Aftermath signee Bishop Lamont and you know what? He sounds a like The Game and has that West Coast lyrical thing going. This song, I guess, is about girls but the subject matter isn’t all that coherent. The hook is kinda weird but the beat is alright.

THE PRESSURE
The lyrics are okay on this song but I didn’t feel the beat that much. They might of should’ve keep this one off. Not bad but nothing noteworthy.

FAN MAIL (feat. Joe Scudda)
Oh shit! This beat is kinda hot. It has the cinematic feel that 9th Wonder sometimes had trouble providing and Little Brother needed. This group needs more songs with energy because one of the big complaints about them is that they are sometimes boring. Check this one out.

ONE ELEVEN (feat. Big Pooh & O-Dash)
This is an okay song. The beat uses a violin loop and has Pooh talking to his brother who just comes home from jail. It an okay song and it’s good to hear Little Brother talking about subjects like these.

BACK AT IT (KHRYSIS REMIX) (feat. Cormega)
Little Brother and Cormega? Okay. The beat is hot with Little Brother sounding comfortable with Cormega sounding out of place. Without that it coulda been a great song because the hook is catchy.

RISE AND FALL (feat. AZ)
Where the hell did they get AZ from? Little Brother gets down with AZ to deliver some retrospective rhymes and unlike Cormega, Sosa doesn’t sound out of his element. It’s a good laid back song. When Little Brother makes songs like this it makes you wonder why shit like this wasn’t on the album.

GROWN MAN (feat. Talib Kweli)
Midi Mafia provides the beat for this one. This song speaks about growing up and getting your “grown man on”. It’s a good song to close out the mixtape.

OUTROLUDE
The end of the mixtape..

Bottom Line:
This was a good mixtape and it is available free of charge (Not that “I’m a just download it and not pay for it” free of charge either.). While this is not their best mixtape, it is probably a must have if you are a Little Brother fan since this marks the first project after 9th Wonder’s departure. There are not that many bad songs but not that many classics either. The one drawback is that there are a lot of features on this mixtape. But then I must reiterate that it is a free mixtape so all in all, I say it was a good effort.