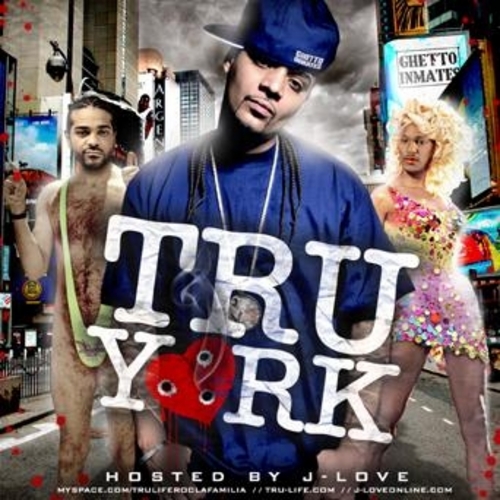 The first time I ever heard or saw anything about Tru Life was on  Beef II. Like most people, yea, I thought dude was kinda gangsta. I mean he did supposedly punked out Mobb Deep (they didn’t even want to acknowledge dude on the DVD) and his crew was all hype and shit firing guns in the air. It was ignorant, but at least this dude sounded a little like what he rapped about. Tru Life later apologized on the end of Beef II after watching the tape of him self. I also remember hearing his song “New New York” (from the mixtape The New New York: The Movement and produced by 9th Wonder) and it had its good points. Tru Life then started beefing with the Diplomats (mainly Jim Jones or as he calls him “Jenny Jones”). His “Puerto-Rican Day Parade” Dipset diss was pretty funny too (“One shot for Dipset taking over The Roc/ Excuse me, taking over at Koch”). With all the beefs, backing from Roc La Familia, Roc-A-Wear ads in Time Square, and co-signs by Snoop Dogg & Jay-Z; can Tru Life actually live up to the hype? Well, that answer is still up in the air, but he does cause some more drama with his new mixtape Tru York (the cover is crazy).

FREESTYLE INTRO
This is probably the real reason people will check out this mixtape (besides the cover). Jay-Z talks for about three minutes responding to the Jim Jones “We Fly High” (Beef mix). Not really a freestyle per se; he only starts rapping towards the end. It does what it’s suppose to, make Hip-Hop fans who Tru Life is unknown too interested. Check out this one if you a Jay-Z fan.

GANGSTA SHIT
Tru Life raps over Lloyd Bank’s “Rotten Apple” beat and you know what? Tru can spit. He addresses the proposal Jim Jones gave him to fight for 50 stacks; “Quit asking me was I gonna fight for 50 thou, I whop his ass for free and throw 50 in the crowd.” Okay. The song is mostly a diss to Dipset (couldn’t tell by the cover?), but it’s a good intro to the mixtape.

IF YOU WANT TO
Mr. New New York gets with Cool & Dre on this one. It sounds like Scarface shit, and that’s not a bad thing. The one thing I can give Tru Life is that his shit does sound New York.

KNIVES LIKE (feat. Nore)
Where the hell Nore been? Tru Life starts off by saying that he taking your favorite rapper’s chain. Nore sounds alright. The track sounds dated though.

MAX B PHONE CALL SKIT
This skit has a Max B sound-a-like (whose in jail) calling a fake Jim Jones for some money. The whole time Jimmy is yelling out catch phrases (Ballin!) and scheduling a facial. Yea, it’s funny.

THE DIPS IS OVA
Another Dipset diss but this time it’s over KRS-One’s “The Bridge Is Over”. If you like diss songs you’ll like this (and most of the album too). “I ain’t never seen a baller in the club with a purple bottle, couldn’t give ‘em out for free to a fucking whino.”

HEARTBEAT (feat. Seven Dirty)
Here Tru raps over Taana Gardner’s “Heartbeat” (You know, the same one DMX used for “It’s All Good”). When I first heard the beat, I was like, “Eww”. But after a few seconds, I didn’t mind it. It has an old-school park feel.

NY, LA (feat. Snoop Dogg)
I can tell they tried here, but, no, the hook sucks. I understand why they tried to reach the west coast, but I skip this one.

IN DEM JEANS
Another Dipset diss, but this one focuses on Jim Jones & Juelz Santana wearing tight pants. It’s starts out like “We Fly High” sample with a Jones impersonator; “I wear a mean tight pair of jeans, so you can see my ass when my head is bent”. If you haven’t figured it out yet, it uses Ginuwine’s “In Those Jeans” beat. It woulda been okay for skit, but he shouldn’t have made a whole song out of this.

RUNNING MAN SKIT
A skit making fun of Cam’ron and Jim Jones getting jumped at the Rucker Park. Kinda funny.

DOORS GO UP
After a few missteps, Tru Life goes back to flowing. A good song that has a woman saying a hook Lil’ Wayne made famous (“No, no, no he didn’t”).

L.E.S. FREESTYLE
This is an acceptable freestyle, nothing really notable.

SCARFACE
Okay, THIS shit sounds like some Scarface shit (it does use a sample from the movie). Real thug shit (if you like that sort of thing).

MY LIFE (feat. Memphis Bleek)
Memphis Bleek comes out of hiding to rap with Tru Life over Hi-Tek’s “Music For Life”. It’s good to hear Bleek again, I hope he finally puts out a good album this year. Oh yea, the track good (I always liked that beat).

FAMILY PORTRAIT
This is the “serious” song for the album; every rapper has one. He goes on about his sister’s death, his Mother’s cancer, fatherless chilhood; serious shit. Check it out if you want that, if not, skip it.

I HATE RAP
Not a bad song here. He raps about his love for 2Pac, wanting to sell records, and being raised by rap. He goes back and forth with his self taking both sides of what rap does to the hood.

THANK YOU
Tru Life thanking those who help him along the way through song.

HUSTLIN’ (Bonus Track)
This song is by a group from Chicago name Global Gangstas, you can check it out if you want.

TELL ‘EM I DID IT (Bonus Track)
This song is by Young Dre, once again, check it out if you want.

Bottom Line:
Tru Life might build a little more hype with this mixtape but it’s far from a classic. This mixtape is okay. It looses stem towards the end with those bonus tracks. Also, Tru could of kept some of the diss songs (“In Those Jeans”). But if you like diss records against Dipset (or in general) you should check this one out; if you are a fan of the Dipsets…uh , don’t.