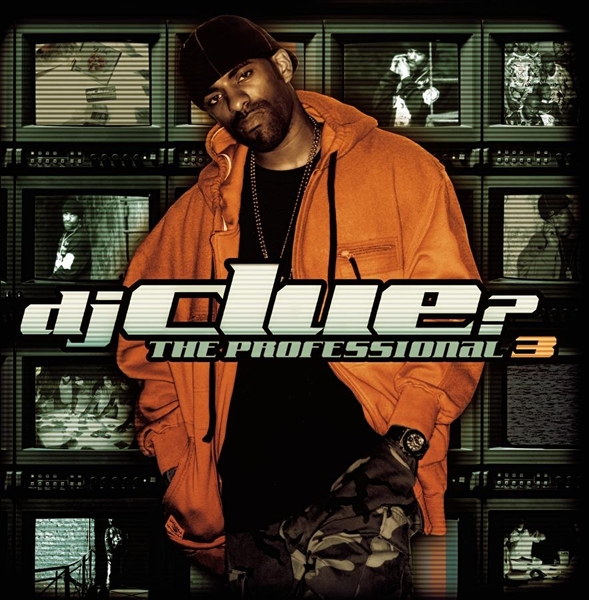 In 1998 when the DJ Clue first album dropped (well, his first commercial one), it was known that he was the number one mixtape DJ around. The Professional went on to go gold and the second one (The Professional 2, released in 2000) went on to sell around 882,000. Fast forward six years, and I barely knew this album was even coming out. With Kay Slay and DJ Drama now leading the mixtape circuit and Clue falling back to handle his label, Desert Storm (Fabolous & Joe Buddens are/were artists on it), I guess six years does make a difference. Was I looking forward to reviewing this album? Not really. To me, I buy mixtapes from my local bootlegger, not Best Buy.

All that aside though, let see what DJ Clue can come up with, maybe he can change my mind.

WAR (feat. Nas)
This sounds like vintage Nasir Jones and Clue here. Not as good as “Live From The Bridge” (from The Professional 2) though. Nas spits pretty good on this one talking about “Mismatch Pumas like Shan in Queensbridge”. Still, the song is short with a time of 1:57.

CLEAR DA SCENE (feat. Lil’ Wayne, Rick Ross, & Ransom)
Dope boys unite. The beats okay on this one; a little generic though. As usual, Weezy shines the brightest (“Bring the punk out of a nigga like Ashton Kutcher”). Ross handles the hook but Ransom sounds out of place here (not terrible though).

FUCK OFF (feat. Juelz Santana & Young Jeezy)
The beat on this one sounds like some Dipset shit. Jeezy and Santana continue their partnership with this one. Neither one delivers anything great though. You know, that drug shit. I didn’t even hear a good Jeezy line. Wait…no, not one.

THE GOLD (feat. Mobb Deep)
You know what? Everybody hating on Mobb Deep lately, but I don’t mind them that much. The beat and the sample of the woman are not bad at all. They talking about taking somebody jewelry though, okay, yeah whatever. Okay song. I am looking forward to Prodigy solo album next year, Return Of the Mac!

I REALLY WANNA KNOW (feat. Jagged Edge & Fabolous)
This is a remake of Jodeci’s “Come And Talk To Me”. Hmmm, did we really need this one? Can I play this for my girl with DJ Clue talking over it for over six minutes? SKIP!

A WEEK AGO (PART 1) (feat. Mario Winans & The Game)
This beat uses the same beat as Jay-Z’s “A Week Ago” (from Vol. 2… Hard Knock Life). It talks about how you and your girl might cool one week, but then she cheats on you the next. Why the hell can’t Mario Winans keep a woman and why does he always sing about it? The Game is okay with this one, not great, okay.

LIKE THIS (feat. Kanye West & Fabolous)
This beat sound like John Legend playing the piano on it. I like it though. Fabolous talks about tricking on a girl (as usual) and “Marty McFly” (Kanye calls himself this) delivers a good verse. Good song, it cool to hear Fab and Ye go back and forth on the last verse.

ALMOST FUCKED (feat. Snoop Dogg)
What the fuck is this shit? Snoop must owe Clue some favors for this one. That hook sounds like garbage! Damn Snoopy. SKIP!

GRILL & WOMAN (feat. Paul Wall, Mike Jones, & Bun-B)
This is a song to just get Houston on the album. I don’t mind Mike Jones or Paul Wall, you know Bun gets a pass. There’s nothing on this song that stands out. I not going to say skip, but I guess if you in Houston you might play it.

LIBERTY BELL (feat. Beanie Sigel, Cassidy, & Freeway)
Okay, I’m starting to think this album is full of old material. Is Cassidy out the hospital and rapping yet? Have Freeway and Beans reconciled yet? Anyway, Philly in the house with this one, Cassidy delivers the line of the song: “My new heater, shell as big as a two liter, and it a knock a two seater back if you need us”.

THE ANIMAL (feat. Styles P)
This song sound a little dated too. Styles is okay with me, he always delivers a good verse or too (“You wanna kill me? Stand in line and join the club”). It’s an alright song, I hope it provides some promotion for his new album. Curse you 50 Cent!

MIDDLE FINGER U (feat. Cam’ron & Juelz Santana)
All right, this has to be an old song. Killa on a Roc-A-Fella album? Back to the song, I didn’t really like it. Is it me or does Juelz use the same hook pattern on almost all of his songs. I miss Cam’ron though, not the one I’ve been hearing this year either. The one from Come Home With Me. Cam if you’re reading this, please wake the fuck up!

GIANTZ OF NYC (feat. M.O.P.)
The mandatory M.O.P. song on a manly New York compilation. The song is…well M.O.P. I don’t mind that at all, it’s just that they always sound like this. If you a fan, you’ll like it. I wonder if they’ll actually come out with an album this year.

YOU DON’T REALLY WANNA (feat. Fat Joe & Remy Ma)
This got to be an old song, Remy still reppin’ Terror Squad. The beat is average with an average performance from both rappers. I did like Remy’s line, “How you living the Fabolous life if you ain’t got a Clue?”. Remember thinking Remy was gonna be the best female rapper when you heard her rhyme on Big Pun’s Yeeeah Baby? Yeah, me too.

UGLY (THUG IT OUT) (feat. Jadakiss)
This is by far the best song on the album. Even though it was on a lot of mixtapes (I first heard it on Kay Slay’s Can’t Stop The Reign), it still shows why Jadakiss is one of the best around. Fat Joe even took the first line in this song for his song “Make it Rain”. If New York wants to come back, this is the type of shit it’s needs. “All these metaphors and similes are memories, I’m expose these young boys identities”.

A WEEK AGO (PART 2) (feat. Mario Winans & The Game)
This is the same song a earlier but with The Game rapping the verses but Mario Winans doing the hook. Did we really need another song about the same shit? Game even says the same verse at the end. If you a Game fan you might like it. Otherwise, SKIP!

UPTOWN (feat. Consequence)
Up last and closing the album is Consequence. I think this was the trade off for Kanye being on the album. Don’t get me wrong, I like Cons. It’s an average dated song but I wouldn’t close a CD with it.

Bottom Line:
All in all, I didn’t really feel this album. I know it’s hard to make a good mixtape these days, but damn. It didn’t fell fresh to me at all. This album didn’t produce any bangers like “Fantastic 4” or “Who’s Next” from The Professional 1 & 2. This one does not bring DJ Clue to the top of the mixtape DJ pile. I guess I’ll just wait for the Gangsta Grillz official mixtape to drop.